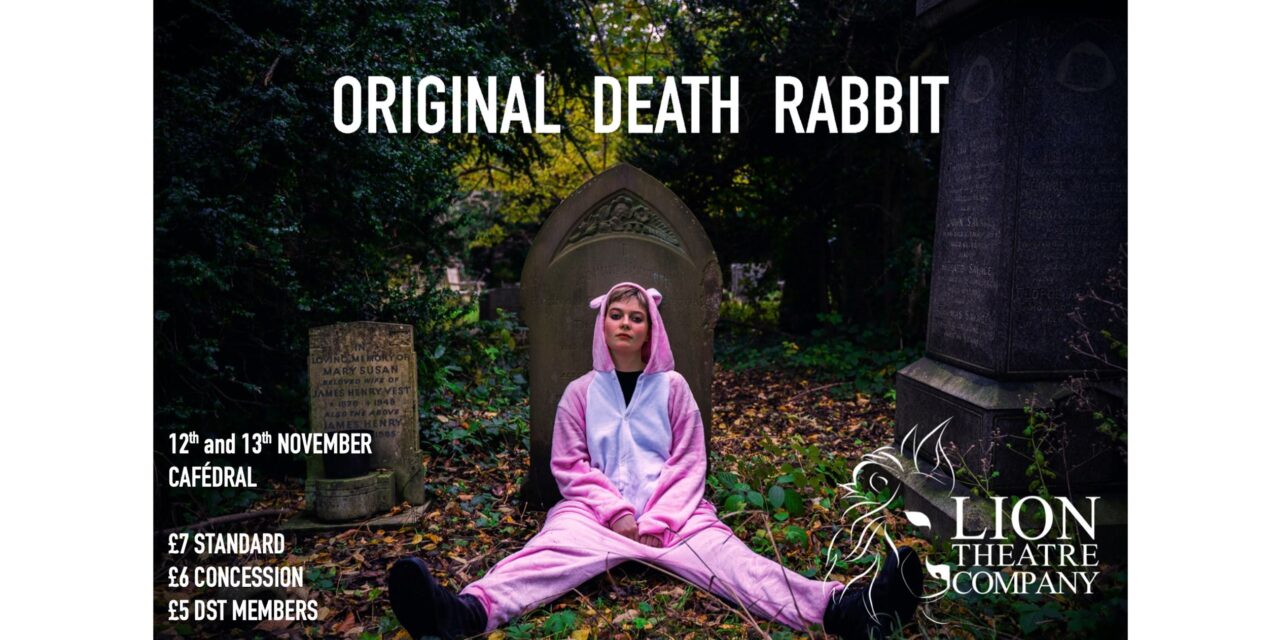 “a triumph of modern theatre”

Heart-wrenching and hilarious in equal measure, Lion Theatre Company’s production of ‘Original Death Rabbit’ is a triumph of modern theatre which engages the audience from the offset through tales from the tumultuous life of one woman. Photographed wearing a pink rabbit onesie at a funeral, she is thrust overnight to online fame, becoming an internet meme which leads to her spiraling down into internet addiction as a coping mechanism. Whilst dealing with her father’s schizophrenia, the protagonist finds herself increasingly attached to her laptop, almost unaware of her own flailing mental health. Deeply twisted with dark humour and some incredibly gut-wrenching moments, ‘Original Death Rabbit’ is truly a play for our time.

Walking into Cafedral, I was immediately immersed in the world of ‘Original Death Rabbit’. The café had been transformed to resemble a grand yet untidy studio flat, and when faced with the play’s only actor already inhabiting the space, it truly felt as though I was watching in on the character’s private life.

Daisy Hargreaves is simply mesmerizing, striking a perfect balance between incredibly heavy emotional moments and fantastic dark humour which runs throughout the play. As a one-woman play it could be easy for an audience to tire easily, however, Hargreaves grabs you from the moment you walk in and doesn’t let go until her very last breath on stage. The subtlety of her acting, coupled with moments of high physicality as well as the portrayal of some rather difficult characters in her life (think your super condescending posh friend and the sister who doesn’t speak to you), mesh together to create an exceptionally believable and surprisingly loveable character. The intricacies in Hargreaves’ performance, and her sensitive approach to the darker themes of mental health led to what I would consider to be the best student acting I have ever seen.

Hargreaves’ exceptional acting is supported by exquisite direction from Isabella Thompson, who has transported us all into the depths of mental health and internet addiction through an awkward, outrageous and yet undeniably hilarious character. Thompson must be commended for the naturality she is able to produce in the way the character inhabits and moves around the space, as well as the contrasting moments of extreme physicality and spectacular way other characters are brought to life without ever entering the stage.

The set offers a visual insight into the cluttered and chaotic mind of the character. Well placed books, food packaging and emptied alcohol bottles highlight the unappealing reality of mental health struggles, and the tragic breakdown of a promising academic. The set manages to feel like a space which is lived in, despite the intentional placement of certain props, and complements the character in a way which feels natural. This is enhanced by the lighting, provided by large lamps within the performance space, which further adds to the realism of the play. However, as the events in the play take a turn for the worse, Hargreaves turns off these lights, so that only the single beam stage light remains. This separates this section of the play as a darker, more intimate moment, and reflects the darker nature of the themes explored at this point.

It is evident throughout this production the amount of passion the entire team involved has. From the detail and care given to the character and performance, to the leaflets with crisis information provided on each audience member’s chair, it is clear how much they care about the issues raised in the play and their relevance within the community. Details are something which have clearly not been overlooked in this production, from the subtlest movement or vocal change from Hargreaves to the specific books scattered throughout her flat, the attention to detail in this production is second to none, and blurs the line between the play and reality.

Overall, Original Death Rabbit is a spectacularly staged and performed play, combining hilarious dark humour with poignant and chilling discussions of mental health to produce an outstanding piece of theatre which stays with you long after you leave the performance.