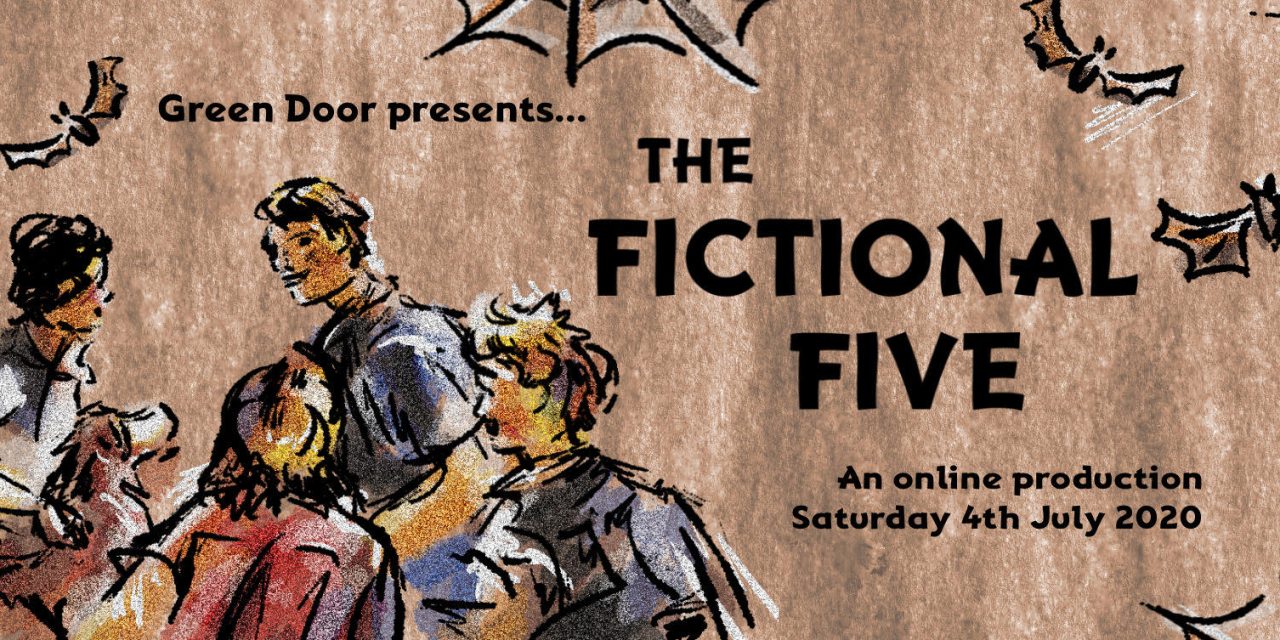 It is always a happy moment when a play hands you the perfect quote to describe it on a plate. Not only are these adjectives appropriate to this delightfully light-hearted production but, as a result of their frequent repetition within the play, continue to reverberate around my head like chimes of a comedic clock. Luckily – or, rather, as a result of its hardworking cast and crew – ‘The Fictional Five’ escapes the potential deathtraps of ‘Corny! Overblown! Clumsy!’ to become, instead, endearing and hilarious. Although this radio play may be described as a simple treat for the ears, it felt like my mouth was doing far more work. As irritated individuals across thin walls confirmed, it barely had time to close before opening again with loud laughter.

The Fictional Five is a spoof of the Famous Five by Enid Blyton. For those unfamiliar, myself included, it reads like Hansel and Gretel, with a merry hatful of other literary and fairytale favourites thrown in. The play follows four children as they venture through the spooky Transylvanian Forest and arrive at the mysterious House of Wendy, encountering talking trees, Herr Stinkinstein and a mysterious Laboratory experiment on their way…

The central quadruple is reminiscent of the main characters of a transplanted and gender-reversed Peter Pan. Unfortunately, without faces to hold onto, Naomi Cook, Lucie Goddard, Issy Flower and George Heuck, who I later found out play Harriet, Lucinda, Sarah and Roland respectively, easily transplant into a nameless ‘female 1’, ‘female 2’, ‘female 3’ and ‘male’. However, this seems to make no difference to the understanding of the plot aside from making it difficult to point out individual merit from collective excellence. Their childish squabbles remain a constant comedic strength while illuminating sibling rivalry and mid-century sexism, the realistic repetitiveness of their conversations tying together an unruly and occasionally confusing plot. Naomi Cook, in particular, deserves special mention for her hilarious additional undertaking of a dim-witted talking tree, its slow moaning voice harnessing the underlying comedic power of Eeyore to produce shoulder-shaking laughter. As does Thomas Mullan’s ‘Dwakula’: his fantastic comedic timing, indulgently iconic accent and mix of frequent puns and computer problems deliver an irresistible image of a sinister, blood-drinking dad.

Meta-theatrical pops increase throughout the play and culminate in some relatable confusion with Zoom and gleefully comic performance of Thriller. These are not only current and intelligent but show an appreciated effort to adapt and connect with an isolated audience with each resultant flicker of a delighted, ‘I see what you’re doing there!’. One benefit of a recorded and edited show over live theatre is evident. The entire cast makes full use of The Fictional Five’s delightfully witty script without fluffing or losing a line not because, with all likelihood, their performance is any more naturally perfect or rehearsed than those performed on stage, but because with each mistake is the opportunity to rerecord and improve. And, as the comic potential of each witty joke, Shakespearian interaction, or hyperbolic characterisation translates into a real laugh-out-loud moment, it shows.

Huge credit must be given to the production team for pulling this off, guided by Lead Director Olivia Adderley. Given the extreme social distancing necessitated by the multi-hundred mile stretch between the homes of participants, each cast member was forced to record and send in their parts separately. These were then edited together with a seamlessness synonymous with a professional production by talented technical director Dragos Fracas. The slight audio differences between each recording merely further individualise the exaggerated, cartoonish voices of each character. Meanwhile, welcome additions to the editing process, such as distanced voices or Panto-esque sound effects, appear with comic precision and misleading ease. This reviewing opportunity arrived with the note that this was a ‘fun’ show, designed to keep students connected, involved and entertained during lockdown, and thereby the implication that its quality could be potentially lower than other DST or Green Door productions. Although its primarily enjoyable nature is undeniable, its comic wit and innovation is commendable and I have no doubt of the deceivingly labour and skill-intensive nature of its production. The entire cast and crew should congratulate themselves for the quality of what they have created.

All in all, ‘The Fictional Five’ is the perfect production to raise low spirits during lockdown, full of the fun and moral victory we sometimes seem to be lacking in the real world. Though we can thank the unfortunate circumstances of a literal global pandemic for the necessity of its fresh audio format, I hope that the ‘The Fictional Five’ becomes an inspiration for theatrical innovation during the inevitably difficult year ahead.

The Fictional Five is available to watch for a limited time on the Green Door Theatre Company’s Facebook page.