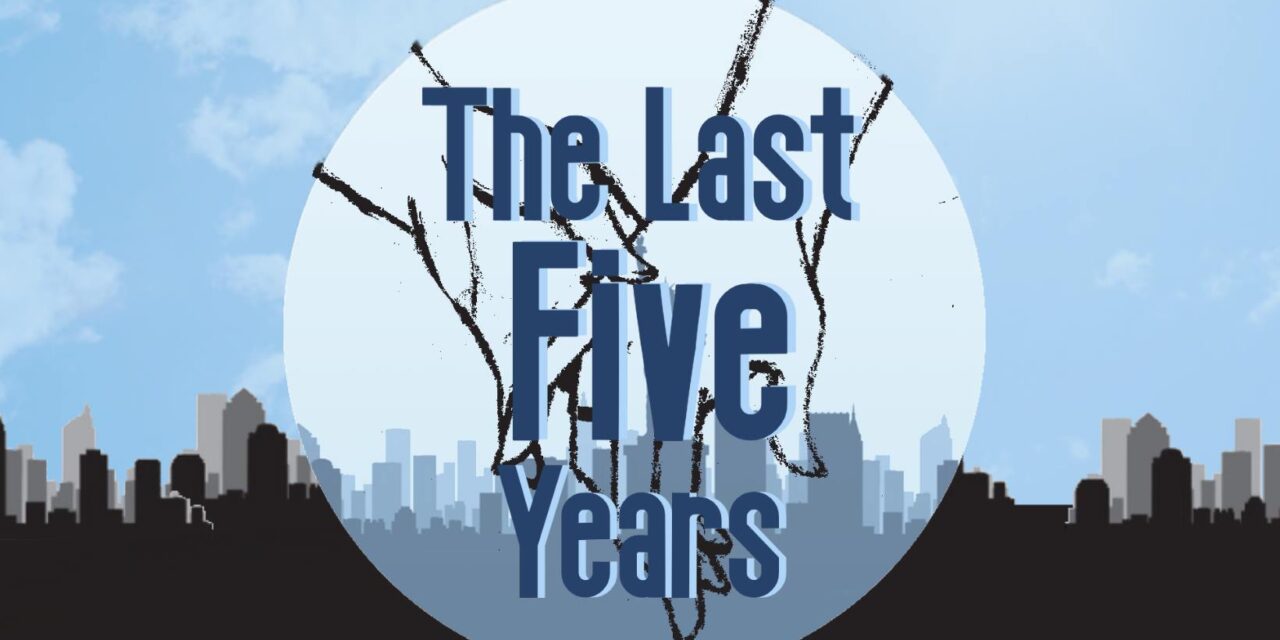 The Last Five Years is a beautifully raw musical that follows Cathy and Jamie over the last five years of their relationship. Cathy begins at the breakdown of the relationship and tells her story backwards, whereas Jamie starts the musical as the relationship is first conceived. Therefore, the story can be a complicated one to follow; however, DULOG’s production excels in its simplicity.

It would have been easy for co-directors Lydia Rae Stephenson and Grace Brimacombe-Rand to overdo their direction in a show with such stripped-back writing. Thankfully, they kept their choices symbolic and purposeful. The first look exchanged between Cathy and Jamie in ‘The Next Ten Minutes’ was perfect- so simple, yet so powerful. Similarly, the physical crossover to the opposite side of the stage as the two timelines overlapped was incredibly effective. However, the placement of Cathy on the edge of downstage right during ‘See I’m Smiling’, and Jamie in the same place during ‘If I Didn’t Believe in You’, was less well done. The lighting design meant their faces were cast in shadow in this position, as well as being turned away from the audience and towards the auditorium wall, meaning we lost some important moments from the actors. Jamie’s entrance was similarly misjudged, as the interruption meant the end of Cathy’s crucial first song did not settle, and this moment was taken from actor Evie Press – a shame, since she had built up to the final line of the song beautifully. By contrast, Jamie’s final exit down the aisle was perfectly poignant.

Evie Press made an unlikely but refreshing Cathy. For such a young performer, and in her first-ever performance within Durham Student Theatre, she had an incredible maturity to her portrayal. Press allowed herself complete vulnerability as well as bringing a real fire to the character. Most impressive was the fact she made the character completely her own. She played both the tragedy and the comedy flawlessly, particularly the latter, and managed to make Cathy fun and likeable – something other actors struggle to achieve, often leaving the charm to Jamie. She truly shone most in ‘Summer in Ohio’ and the audition sequence – her use of voice in her change between Cathy’s ‘speaking’ voice and Cathy’s ‘singing’ voice was impressive. She kept every song interesting, finding new ways to explore the same emotion so that her performance was never one colour. In Cathy’s more emotionally vulnerable scenes, her acting was perfectly understated, and her delivery beautifully honest. While this was wonderful, she tended to explode energy for the bigger outbursts; it would have been nice to see more of the subtlety seen in quieter moments to allow these outbursts to simmer instead and build more slowly. Her background acting was also less strong than her shining moments. Press appeared uncomfortable on the stage at times during Jamie’s songs, as if she didn’t always know what to do with herself, utterly opposed to how confident she was in her own scenes. Her voice was crystal clear, with the most effortless vibrato in her mixed belt. ‘I’m a Part of That’ was the most vocally stunning of her solos. Most impressive was her phrasing: perfect throughout, being conversational yet lost none of the musicality. At times she did perhaps push too hard and lost some of the beautiful resonance of her sound; however, this strain somewhat added to the emotions she was trying to convey.

The only real criticism of the show as a whole came in its sound design; often the microphones were not balanced, and we lost some of the lyrics under the band, particularly with Jamie’s songs. Cathy’s entrance on the final duet was also too quiet – and it was a shame to see Press’ final swell get lost under Stockley. At times, the sound of the first violin was unpleasantly tinny, lacking warmth to its tone on several of the important recurring motifs. The musical direction by Ollie Fabb was, however, very good. When the singers became ahead of the music, he was quick to correct the band, moulding them to the vocalists throughout.

Ollie Stockley’s Jamie was cheeky and charming, with a standout accent. His vocal agility was awe-inspiring, with his beautifully bright belt and effortless, buttery runs outstanding. I desperately wanted him to play more to the subtext of the character earlier into the show, especially as he did this so perfectly in ‘Nobody Needs to Know’. Here we began to see a real depth to both Jamie’s character and Stockley’s acting. The contrast between Jamie’s confession while simultaneously watching Cathy get ready for their first date was heart-wrenching, and again the directors have found perfection in simplicity. His use of head voice in ‘The Next 10 Minutes’ was well directed. Allowing himself this vocal vulnerability, Stockley did a really good job of proving that, at one time, Jamie really did love Cathy, an area of Jamie’s character which actors often overlook to give way to his sleazier, dislikeable attitude towards women. We began to sympathise with him despite his treatment of Cathy. Stockley never pushed too hard for the comedy but had the audience laughing with him throughout. Similarly, he had a great natural story-telling ability: on the phone, it was hard to believe he was not actually speaking to someone on the other end. His background acting was perfect and greatly complimented Press’ work. He did, unfortunately, give away several otherwise unnoticeable mistakes by blanching his face every time he made one.

There were some definite opening night nerves evident in both, magnified because they were so exposed, with no ensemble to hide behind. Stockley and Press could rarely lean on each other for support either because they were almost always separate. Despite this, the two actors had astounding stage chemistry, especially considering they were so detached in every song preceding ‘The Next Ten Minutes’. Although there was no acknowledgement of each other’s presence on stage, there was still a palpable connection between the two.

The Last Five Years performs at The Assembly Rooms Theatre from 22nd to 25th June. Tickets are available to purchase here.