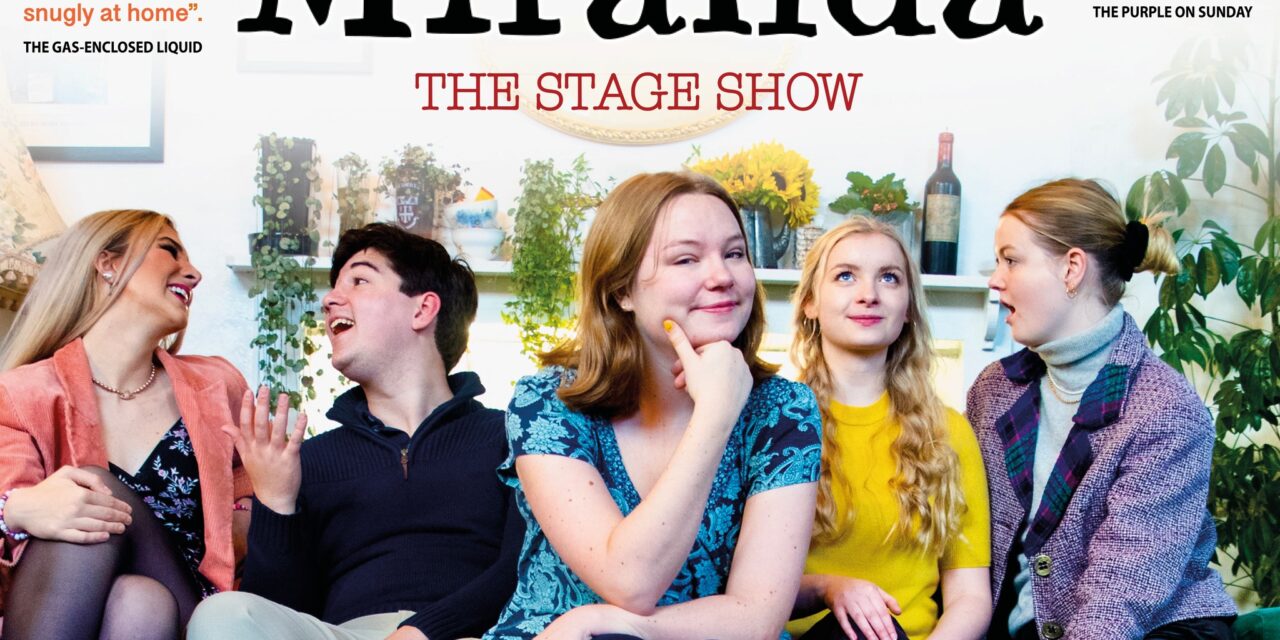 “a grand finale to this term in theatre”

I have to say, I didn’t know what to expect from Miranda: The Stage Show. As a French guy, I had never heard about it, nor did I ever see it or know any of its running gags. And yet I left the theatre exhilarated and amazed by the brilliant adaptation of the sitcom.

Playing in front of a sold-out Assembly Rooms, the actors drew the audience into the show right from the beginning. And one quickly realizes a sitcom is a perfect material for theatrical adaptation. Typically enclosed in three-sided sets with a heavy wash of light, the sitcom look was perfectly recreated by set designer Anna Hayward and light director James Goodall. Anna’s set felt like an exciting playground, a malleable space for comedy. Divided into three levels, it allowed seamless transitions between the joke’s shop, Miranda’s apartment and Gary’s restaurant; places that end up feeling familiar by the end of the play. James’ lighting got more and more interesting as the show progressed, taking on a more subjective and playful role especially in the dazzling musical numbers.

Speaking of characters, what an amazing cast. Emily Phillips and Siobhan Gardiner were an iconic duo as Tilly and Fanny. Jacob Vellucci just consistently delivered as Clive when it was his time to shine, prompting some of the most hysterical reactions from the audience. Multi-rollers Becca Duckworth and Joe Rossiter managed to switch between roles elegantly. Their strong characterization allowed us to glimpse into the wide array of secondary characters without being distracted from the main show. Olly Stanton’s high-energy comedy and irresistible musical numbers were a real treat to watch. Peter Firbank’s kind and gentle Gary – Miranda’s love interest and chef at the restaurant – was lovable and in perfect contrast with Julia Kennerly’s Penny – Miranda’s old-school, strict, unloving mother who, surprisingly enough, also knows how to have fun. Anna Pycock as Miranda was perfect. She displayed the strength necessary for occupying centre stage while convincingly acting the more vulnerable sides of a middle-aged woman. Her Miranda was both very self-aware and very lost when it came to her love life. She excelled in the awkward humour of the character and always managed to get the most fun out of every scene, whether it was by commenting on chocolate bars shaped likes penises, being stuck in a children’s chair, or breaking off into a song. Alongside her stood Zara Stokes Neustadt in the role of Stevie, her very energetic and sassy shop assistant.

All of this makes for an exciting experience, where you are right in the middle of the sitcom. Literally, you are the laugh track. The show is like a series you binge watch. Over the course of two hours, you see character developments, action and running gags set up to a level you would expect only from a full season. Director Ella Al-Khalil Coyle, and her assistant Lauren Brewer, made a fantastic job in bringing all the hard work of everyone together into a sparkling, irresistible, deeply comical, and – I have to say – very British whole. Co-tech directors Rhiannon Morgan and Dylan Bunyan and their ATDs have to be congratulated for their technical prowess: they’ve notably set up a giant overhanging screen, giving an additional dimension to the show, and managed the microphonic mess of actors and a live band. The band, directed by Ollie Fabb, gave the show its tempo; it shined bright, light-hearted colours in the very dark Durham winter.

Clearly, a lot of work has been put into this show, and we can only imagine the fantastic work of the producers that cleared the way for the play to run as smoothly as it did. In the end, Miranda: The Stage Show is DST at its finest. It demonstrates the power of people coming together and putting together their skills to bring amateur theatrical craft to a new level. The Miranda team took theatre seriously but didn’t forget to not take themselves too seriously in the process. It seems like the spirit of karaoke permeated the whole show, conferring it its drunken energy, its humour and its intensity. The end result is a delight, a grand finale to this term in theatre, and was met by enthusiastic, cheering applauses.

Miranda: The Stage Show is playing at the Assembly Rooms 9th-11th December