Sketch comedy has always been something of a favourite among the student community, for its fast-paced action and well-timed silliness – and the Durham Revue’s returners’ show was no exception. Performed to a packed audience at Collingwood Theatre, the Revue presented an energetic, enthusiastic and thoughtful mix of sketches from their Edinburgh Fringe show this summer.

In celebration of their “45th-ish Anniversary”, modern times was established as a central theme, with a self-deprecating edge that stemmed from a comparison of today’s troupe compared to that of 1974 – still all-white, largely middle-class and run by a male president, we were promised a “progressive” show to make up for it. After a slightly slow start in introducing the idea of

the Zeitgeist, the biting social satire was retained throughout, from the casual references to corrupt business, to a critique of political correctness and a particularly well-done sketch stylised as a middle-class game show. At first, it seemed that this self-effacing mockery of the likes of Helen from Guildford would become something of a default format for the show, but there was plenty of variety throughout. The troupe impressed with their diverse range of characters, playing everything from cows to French portrait painters to life-size action figures of themselves.

Undoubtedly, the Revue were at their best in the short, clever scenes that got the best reaction from the audience, allowing us to enjoy the bizarre scene before the big joke was revealed; the Winter Olympic diving and colour blind Rubik’s Cube contest were met with particularly big laughs. This style of writing was carried over into some of the longer sketches, and often just a raised eyebrow or a quick comment got a bigger reaction than the broader storyline. At times, some sketches seemed to drag a little beyond the funniest moment, or the last line wasn’t quite the clever punchline the audience had anticipated, but the energy was high throughout and there was never any let-up in the hilarity.

The use of light and sound was refreshingly well-crafted and original (though let down a bit by the black curtain of the Collingwood Theatre, which didn’t always show the images very clearly but it didn’t really matter); the mock Lidl advert was especially clever, as well as the wine-glass sketch, where the rapid shifts in music and lighting suited the group’s collective physicality and silliness. This was maintained throughout the show, as the actors danced their way between each sketch – always accompanied by music to suit whatever we had just seen – keeping the energy high and the audience enthused throughout. Occasionally, a sketch seemed to thrive more on the implicit ridiculousness of the moment than any particular 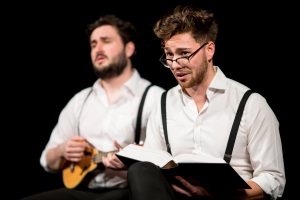 stroke of comedic genius, but it was nevertheless amusing and kept the audience guessing. A moment nobody had expected was the sudden audience participation, when two (seemingly unsuspecting) front-row members were pulled onto the stage and thrust into the centre of a clever narration of wordplay and bizarrely dark humour that left everyone in stitches.

The show came full circle towards the end, with a fast-forward to the 2063 Revue looking back at the state of 2018, a clever touch that neatly brought us back to the Zeitgeist of the title and ended with a final dig at the show we had just seen. All in all, the Durham Revue delivered a truly hilarious evening that made it worth every step of that long trek up to Collingwood in the dark, and a show that promises an equally brilliant year ahead for them as the 2019 troupe begins. The audience clearly had a great time and the laughter was infectious; the only real shame is that I couldn’t think of a pun about review and revue.