Review: You Only Laugh Twice 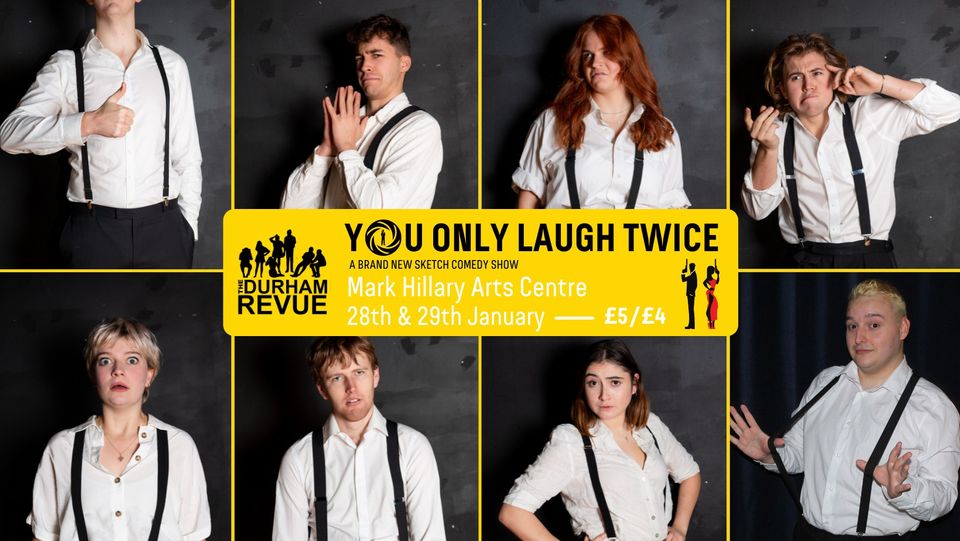 The Durham Revue auditions for the role of the new James Bond in You Only Laugh Twice, and I wish I could start this review off with a dry, witty comment along the lines of “well, I did only laugh twice”, but that was not the case at all.

The whole piece was a succession of sketches of varying themes and length, all written by the Revue, and all which played out as an audition for the new James Bond role. This overarching narrative was the bond that kept the sketches together (forgive the pun), structuring the piece as a whole and giving the sketches a purpose, with everything leading up to the ending where the next James Bond is finally revealed.

The piece had a great energy, it was lively and fun, which is particularly important for a comedy sketch show. I think what really helped the show feel snappy was that the sketches never overstayed their welcome: the build-ups never unnecessarily long nor the punchlines dragged out. This kept us on our toes and attentive throughout. The range of topics and styles further aided this, and the group did a good job of ordering the sketches to keep similar sketches spread out, and related sketches close enough for their narrative not be forgotten, but far apart enough for the jokes to feel fresh. Even the transitions acted as mini sketches: the sketches were separated with a snippet of a song, of which the lyrics would allude to the previous sketch, even once working directly as the punchline. This was a very nice touch.

As for the sketches themselves, particular standouts to me included one man’s obsession with a chicken hat, and Prank Patrol being the cause of national upsets and its host being a supervillain character of sorts. I was especially fond of the absurdist humour, but that is not to say that the uses of other types of humour were not successful: the dark humour was awfully funny; the meta humour an entertaining switch of tone; the puns amusing; and the many sexual innuendoes were silly and had me laughing despite myself. Yet they were used cleverly to ensure they were not too crude.

Most sketches were strong and succeeded in getting laughs out of every audience member, and while some received a slightly quieter response from the audience, each one had a clear and rewarding punchline which, if it did not cause one to laugh out loud, had to be appreciated for its wit.

And what is great writing without great performances? Each actor did a superb job at giving the dynamic performances this type of show requires. Everyone was animated, bold and fully committed on stage, with a style that would verge on overacting in any other type of theatre but worked so perfectly here.  While each performance was great, Bob Howat and Henry Gwilliam stood out to me with their over-the-top portrayals of each of their respective characters.

Other aspects of the show aided the acting by adding extra dimensions to the skits. The limited set allowed the actors to give such big performances, and I greatly enjoyed the use of props: the alcoholic concoction which was actually consumed onstage, and the baby doll that was violently mistreated. Lastly, I must of course mention the audience participants who really added to the piece rather than simply feeling like a gimmick, which is a danger when audience participation is incorporated into a show. The actors bounced off them well and it was a good way to keep the show feeling spontaneous and eventful.

Finally, I want to commend every member of the Revue – it can be easy to ignore how difficult it must be to write so many sketches, and while some were bigger hits than others, it is very impressive to have put together and created so much original work. You will laugh more than twice, I assure you. This is a great piece which showcases some of the best that the DST has to offer, it was a pleasure to watch.