On March 8th, Fourth Wall Theatre presented their production of Anna Jordan’s Yen, a striking and compelling play that concerns the cycle of cause and effect into which struggling and impoverished adolescents fall, leading them to commit atrocities that may shock or even alienate the audience, but nonetheless leave us with a sense of empathy that we may not have thought possible. Overall, this production stood out as an astute and nuanced interpretation of Jordan’s work, with great attention to detail having gone into its technical aspects, and strong performances all round.

The choice of venue – the black-boxed stage of the Assembly Rooms Theatre – was perfect in shaping the sense of isolation and claustrophobia that renders the lives of Hench, Bobbie, Jennifer and Maggie as tragic as they are. The intimacy of such a choice of setting also managed to dilute the sense of alienation that we as an audience may experience – we were confronted with the personhood of these characters and invited to engage with them rather than judge their actions from a place of physical and emotional separation.

Furthermore, the technical aspects of the show were executed very effectively. The use of music made for an effective means of smoothing out the scene transitions, as well as setting the tense, unhappy tone of the play very poignantly. This tone was further emphasised through the use of the smoke machine, crafting the hazy limbo state in which the characters subsist. It was clear that a good deal of thought had gone into how best to convey a state of both fury and devastation, and as a result, this was translated in a way that was engaging and resonant for the audience. 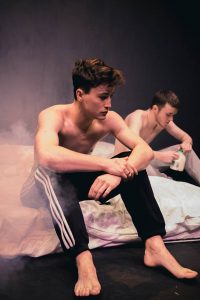 Every cast member was able to give a strong performance, with no weak links. Louisa Mathieu was highly convincing in the character of Maggie, portraying at once the recklessness of an irresponsible mother and the profound hurt lurking beneath, drawing out our empathy for a woman caught in a cycle of class struggles and abusive partners. Gayaneh Vlieghe gave an equally compelling performance as Jennifer, the eponymous ‘Yen,’ truly able to demonstrate why her character occupies the heart of the play. Though she and Danny Parker were both outstanding on their own, they did at times seem to lack chemistry, making the scenes between Jennifer and Hench lack the emotional weight that they were intended to convey. In spite of this, Parker’s performance as Hench was incredibly compelling; he was able to convey masterfully the sense of a teenage boy bristling with surface tension beneath a façade of apathy and about to erupt at any moment. Of all the performances, however, the best belonged to Jack Firoozan – his role as Bobbie was incredible, commanding the attention of the audience every moment that he was onstage. Firoozan gave life to one of the most difficult characters for audiences to grapple with, drawing on our empathy in moments such as his unconditional love for both Maggie and Hench, whilst portraying his character’s callous misogyny and horrific treatment of Jennifer as something born out of a tragic system of cause and effect – despite our disgust, Jack made it difficult to feel nothing but hatred for his character. Overall, the force of the play was felt throughout through the brilliant performances given by all.

Fourth Wall Theatre’s production of Yen was an incredibly strong one, managing to convey shocking and disconcerting themes without alienating its audience, and demonstrating careful consideration of how best to grapple with such a volatile work. The compelling performances and attention to detail made for a show that was jarring, gripping, and emotional, leaving its audience processing its complexity for a while – just the way that Jordan intended her play to leave us. If you want a brilliantly executed show with poignant and complex themes, go and see Yen at the Assembly Rooms Theatre.

Yen will be playing in the Assembly Rooms Theatre at 7:30pm on the 9th and 10th March.