Olivia Bevan allows herself to be immersed in Fourth Wall Theatre’s new take on a German classic. 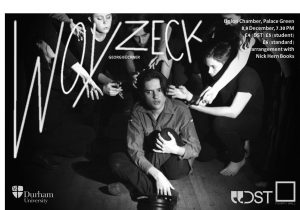 On arrival at Fourth Wall Theatre’s production of Georg Büchner’s Woyzeck, I certainly did not know what to expect, and my trepidation only deepened when, upon entering the performance space, I was handed a torch. Curious, I was met by a dark room with an arched ceiling, while a live orchestra played sombre music. The overall effect was very atmospheric and the intimate, intense setting of the Durham Union Chamber paved the way for a dark and surreal piece of theatre. The set was sparse, with only a few chairs used, which were quickly moved between scenes in the darkness to keep the pace brisk. However, these scene changes at times did seem a little clunky, as chairs were scraped or banged against the floor. 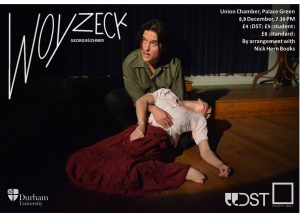 Woyzeck could be described as a bizarre circus of light and darkness, music and song. The characters entered in darkness, each actor demonstrating an excellent use of space that drew the audience into the piece; the fourth wall, as you might expect from the theatre company’s name, was thoroughly broken. The parade of entrances, exits and sometimes brief scenes interspersed with moments of darkness and light had a disjointed and disturbing effect, which aptly paralleled the titular character’s descent into madness. This descent was excellently portrayed by Kishore Thiagarajan-Walker, whose mannerisms and physicality progressively became more and more manic as the downtrodden Woyzeck’s paranoia about his wife increased. His wild eyes and delivery of his lines gave a sense of absolute abandonment, and the emotion that he demonstrated towards the end of the play was genuine and heart-wrenching. As his wife, Alice Chambers showed a fragility and desperate vulnerability that was tragic and touching.

The rest of the cast must be commended for their fantastic ensemble work. In the shadows, they represented a perfect harmony, both in the way they moved as one body and in their mellifluous singing. The writing and execution of the music should also be praised, as the melancholic and sombre tones of the orchestra were beautiful to listen to, and enhanced the tragedy of the play, whilst simultaneously being disturbing in their child-like, nursery rhyme style when sung in harmony by the cast.

As for the torch I was given, I was intrigued and unsure as to when to turn it on; however, I was thrilled by the natural way this was facilitated. Certain audience members (who were clearly in the know) would turn on their torches as they were sat in the dark, and it was up to the rest of the audience to simply follow suit. The lights themselves added to the surreal nature of the performance, whilst the spontaneity of our audience participation drew us into the immediacy of Walker’s acting.

Finally, director Athena Tzallas, and indeed the whole production team, should be praised for their hard work in pulling off a challenging and thought-provoking piece of theatre. This piece is deeply affecting, and is not a piece to be taken lightly, nor entered into without preparation for the surreal and bizarre.

Woyzeck has its second and final performance tonight at 7:30pm in the Durham Union Chamber.