With raving reviews and star-studded songwriters, many, including myself, had high hopes for Trevelyan College Musical Society’s performance of Working the musical. Capturing the “extraordinary dreams of ordinary people”, Workingis a successful and nuanced exploration of the conflict between ambition and reality, multigenerational hope, and the transactional nature of relationships among the American working class. My already high expectations for the musical were 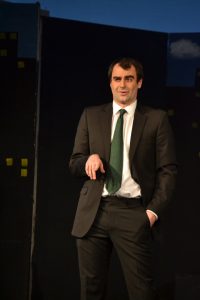 exceeded when I saw the dynamic, lively energy of the cast, their strong execution of the musical numbers, and the impeccable comic timing.

From the opening number, ‘All the Livelong Day’, I was immediately impressed by the smooth choreography and creative use of levels, which heightened the professionalism of the production. As the show unfolded, each character was able to have their own soliloquies, which successfully embodied the interplay between the isolation typical of a city and the multiplicity of voices within it. The use of soliloquies was particularly effective when Martha Page (playing the receptionist Sharon Atkins) and Fergus Barker (as tech support Jhonnie Chadha) shared moments of synchronicity while talking over one another, heightening the painful irony of their predicaments:  ‘I’m a communicator and I can’t communicate’.

The musical’s humorous moments had the audience doubled over in laughter. Prior to the project manager Amanda McKenny’s initially sombre soliloquy on wasted potential, the presence of an offstage voice added some comic relief: “Where the fuck is that report?” Charlie Procter’s comic delivery (no pun intended) as Freddy Rodriguez, a McDonald’s worker, during the song ‘Delivery’ was highly commendable – the audience chortled when he exclaimed “I smell like a burger!”. The occasional glitches of the microphone did not detract from the upbeat rhythm and amazing energy of both him and the chorus. Similarly, people could not help but laugh when Jonny White brought the throaty arrogance of a corporate executive, Rex Winship to life, or a few scenes later during his portrayal of Conrad Swibel, a UPS worker who shouted to kick a barking dog down the street. Martha Page’s portrayal of an overzealous, xenophobic teacher who wields a classroom pointer like a weapon elicited uproarious applause from the audience.

In the second act, there were moments where the musical faltered. For instance, during ‘The Mason’, the audio was once again shaky due to microphone glitches, and the soloist’s voice was strained on high notes. While the musical is known 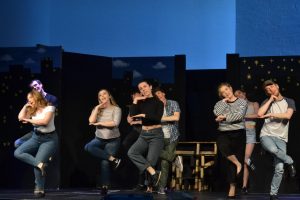 for its eclectic blend of musical styles such as folk and country in the song ‘Millwork’, ‘Cleanin Women’ unsuccessfully attempted to incorporate elements of jazz.  Nevertheless, some of the best musical numbers of the entire show were in the second act, balancing out the glitches. Two of my personal favourites were ‘It’s an Art’ and ‘A Very Good Day.’ At the former, the disdain on the customers’ faces added to the comic relief, and as Eve Battersby danced with the tablecloth and climbed to the top of the stage, she was met with screaming applause from the audience. Written by Lin-Manuel Miranda, ‘A Very Good Day’ was emblematic of much of his work: it evokes pathos for individual stories, bringing me close to tears. Both Frankie Pullman (portraying the nanny Theresa Liu) and Dorian Held (eldercare worker) harmonised beautifully and richly as they sung “For now I do what no one wants to do”, in a powerful commentary of the nature of forming stronger bonds in the workplace than with one’s immediate family, and the state of waiting to achieve dreams while working out of necessity.

The musical ended on a high note – literally and figuratively, culminating in a victorious cast-wide fist-bump. The excellent blocking in the final song, ‘Something to Point to’ was indeed something to point to: the pyramid and circular formations alluded to previous scenes in the play while emphasising the non-stop motions of the working world. As the song reminds us, everyone should have something to point to, and the cast and crew of Workingshould be proud of their successful production.

Working will be playing in Trevelyan College Dining Hall at 7:30pm on Sunday 23rd and Monday 24th June.