REVIEW: Why did the chicken cross the road?

With Comedyfest coming up this weekend, KEITH. have wonderfully demonstrated the hilarious potential of student sketch comedy, and made their claim on a scene often dominated by the more established troupes. Tucked away in Trevelyan College’s Dowrick Suite, KEITH. present an hour of fresh and fast material, keeping the audience rolling with laughter despite some minor hiccups.

KEITH.’s style comes across as loud, brash and somewhat confrontational – after an energetic introduction done via rap, the troupe present fast, punchy gags interspersed with longer, more humorous sketches, successfully maintaining energy and never letting the audience’s sides rest for too long. They flit between a wide range of settings, from the domestic to newscasting to a plane cockpit, and no beloved children’s franchises are safe as they tackle Toy Story, Teenage Mutant Ninja Turtles, and Scooby Doo. There is little room to grow bored in the show’s rapid frame, and the laughs just keep rolling on.

I will admit that the phrase ‘nothing is off limits’ in the show’s publicity filled me with an unspeakable sense of dread as I braced for an evening of uncomfortably “edgy” comedy, but while Why did the chicken cross the road? did touch on taboo subjects it was done in an extremely effective manner. Certainly, many of the bits pushed at boundaries but they did so in a 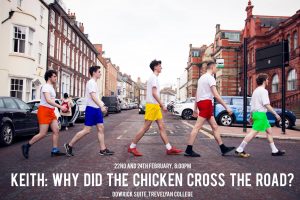 way that always avoided becoming gratuitously offensive – none left an unpleasant taste in the mouth and, perhaps most importantly, they were always very funny.

Indeed, the only real downside with this show is its length, but keeping things within an hour allows the troupe to avoid filler and make every sketch a winner. Even if some don’t appeal to an individual so much, the relentless pace of the show means that they are moved past quickly, a hysterical gem just around the corner.

The troupe themselves – comprised of Andrew Cowburn, Calum Maclean, Barney Mercer, Jack Firoozan and Mungo Russell –  were all outstanding, high-energy performers greatly connecting with their material. Working fluently both as a group and individually, they jumped quickly between roles, pulling off spot-on impressions, farcical physicality and some ear-shattering vocals. There were, admittedly, a few cracks of laughter, and some line bungling by Firoozan, but the troupe’s alacrity and energy allowed them to play off these slip-ups nicely, and keep the good humour flowing. Mungo Russell deserves a special mention for his facial gymnastics, often having the audience in fits of laughter without a word being spoken.

Prop use was wisely kept to a minimum, allowing both its particular usages to shine, as in the Golf sketch, and the moments of mimed action to have a greater (and uproarious) impact, as in Raven. Scene transitions were smooth and speedy, masked by wittily appropriate songs to help maintain the light-hearted atmosphere.

Overall, KEITH.’s Why did the chicken cross the road? is an excellent production. Every gag landed with the audience, and there was never a dull (or quiet) moment in this riotous performance. There is material here broad enough to appeal to all tastes – my personal favourite was the Harry Potter sketch, but there are bits too for those less inclined to the witty desecration of childhood memories. The five highly talented comics shine in a hotly contested field, and firmly stake their claim as a troupe at the peaks of student sketch comedy.

Why did the chicken cross the road? will be playing in the Dowrick Suite in Trevelyan College at 8pm on Sunday 24th February.