First Theatre Company’s production of Edward Albee’s modern classic Who’s Afraid of Virginia Woolf? reimagines a fateful night at George and Martha’s in which the limits of tolerance are not only tested but disregarded altogether, as an evening with a young couple quickly devolves into a distorted portrait of married life. The nature of Albee’s colossal script marks out any production that tackles it as an ambitious one yet this cast accepted the challenge with a professional ease and donned their roles with impressive effect.

The intimate site of this production, the Durham Union Debating Chamber, was immediately evocative of the intimacy to which we would be treated throughout the performance; the dulcet tones of classical music filtered throughout the audience as we trickled in and took our seats, just a hair’s breadth from the set itself. This proximity augmented the sense of immersion that would be sustained through the performance, especially during scenes such as that of George’s recount of the “Bergin” story and the harrowing tale of the boy that committed matricide. The lengthy silence following the dimming of the lights initially felt discordant and awkward yet the immediate immersion into dialogue upon the actors entering the set diminished this. Whilst simplistic and not artistically inventive, the technical decision to spotlight the entirety of the performance enhanced the audience’s captivation and matched the sense intensity evident in the script. The use of the space was masterful, 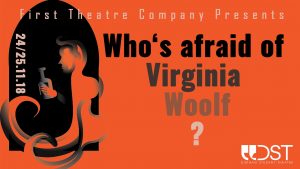 each return to the liquor table was pointed and a marker of a further deterioration into the psychological incoherency of the older couple; the use of the doors in the room and the maintenance of character even when “backstage” really offset the impression that we were mere spectators witnessing a surrealist impression of domestic dispute.

These disputes were thundering and frequent and were doled out between moments of disquieting tranquility; perhaps the most jarring moment of the entire production was the collision of these two atmospheres as George’s macabre Latin requiem provides the melancholic undertone to Martha’s incomprehensible screaming at the death of their “son;” the “it”, the “him” that pervades the dialogue at every turn. Ewan South’s sinister delivery balanced out the howling despair of Katie Cervenak as Martha in a manner so arresting that you could have heard a pin drop. The two leads complemented each other effectively and provided a believable depiction of two people tethered to another by delusion and the desire to escape it. Their command of the room was enhanced by their counterparts in Sebastien Pironnet’s Nick and Lowri Mathias’ Honey. The mirroring effect of the two couples was especially effective in that each pair provided the antithesis of their counterpart; where Nick was “testy”, George was collected and Honey’s infantile interjections were met with the authority of the unstable Martha. This characterisation went beyond Albee’s script to provide an insight into what may await the young couple in later life.

The desire to create an emotionally electric atmosphere was palpable and with a script filled with what director Auguste Voulton, termed “psychological bashing”, the need for complex characterisation was evident. This was generally achieved with success, however some of the more impassioned speeches by Martha were at times excessive and I felt that Katie Cervenak’s most powerful moments lay in the outstanding emotion she expressed towards the play’s climax. The almost poetic monologue in which she melancholically admits that George has made “the hideous, the hurting, the insulting mistake of loving me” struck a resonant chord and the tenderness of Martha’s sobbing despair revealed the versatility of both the role and the actress who played it.

The absurdist elements of the performance such as the jarring and sporadic recitation of the leitmotif, Who’s Afraid of Virginia Woolf culminated in an emotional disorientation that contributed to the highly effective psychological taxation of the play. Ewan South made brilliant use of the play’s allusion to Tennessee Williams’ A Streetcar Named Desire as his pelting of the snapdragons effectively sustained the violent undertones in the play. This violence was wonderfully incorporated throughout; the forceful nature of the “snap” motif and the constant crunching of ice provided this pervading sense of always being on the precipice of violence.

The combination of the competent handling of an intimidating script and the evocative performances of a cast wholly committed to their roles produced a successful production that is psychologically challenging and emotionally insightful. This performance is hopefully indicative of many more resonant productions to come from 1TC. As Nick said, “aside from enjoying it, I appreciated it”; I would highly recommend that anyone watching does both.

Who’s Afraid of Virginia Woolf? will be playing at the Durham Union Debating Chamber on Sunday 25th November at 7:30pm.