Review: When The Bees Come 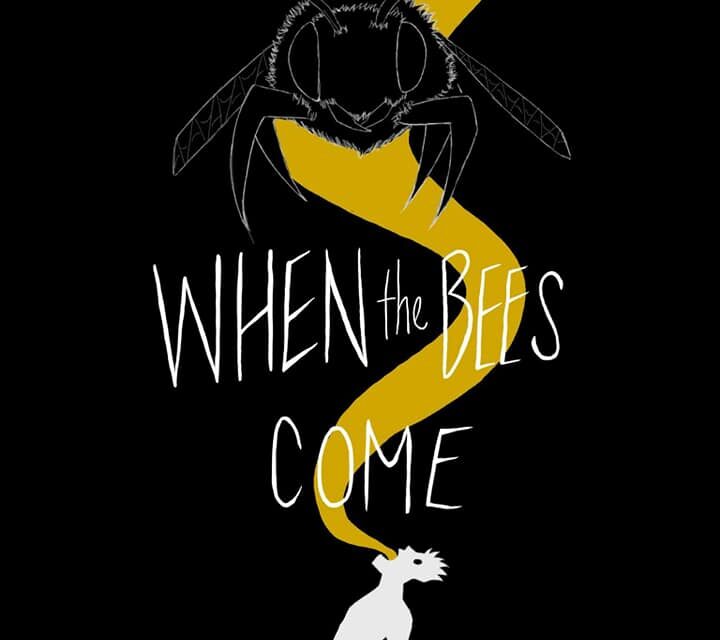 ‘When the bees Come’ is a heart-wrenching look into family dynamics and mental health. The play was written by Calixte O’Brien as a dedication to queer and trans horror fans, people who often see themselves reflected in horror media as the villain and have grown tired of this. By choosing to focus the horror on what Hestia experienced, as played by Georgia Malkin, the show’s non-naturalistic styling still felt very grounded in reality, which only served to make it more impactful.

The performance follows Hestia as they try to navigate their late teen years with the onset of mental health episodes that have previously impacted their older brother and father. Beginning in a doctors office, Hestia attempts to explain their episodes, but becomes frustrated when their doctor (Scout Pemberton), refuses offers of medication. As they leave the office, an episode begins and we as the audience get our first insight into their mind. A green wash overtakes the stage, and an unsettling buzz fills the room, every character on stage freezes, a smile plastered over each of their faces. Hestia has clearly experienced this before and begs for it to stop until the episode passes, something which becomes more common as the show progresses.

The siblings, Hestia and Randall (played by Ellen Olley) were both undeniable presences onstage as they try to navigate being siblings, and Randall tries to help his sibling in any way possible, even when he doesn’t know how. His growing desperation to help Hestia, to prevent them from suffering in the same way that he had, is gut-wrenching to watch. It had the audience completely captivated. These two stellar performances had the audience completely captivated, as we both sympathised and understood what they were going through, something that was helped by the non-naturalistic scenes and use of staging throughout.

Mother (played by Natalie Brundle) was an interesting character. As we discover more about her, the audience’s view shifts slightly, as we understand that this is a person with generational trauma. However, that doesn’t make her actions towards her children or her husband acceptable, and Brundle does an incredible job of embodying this nuance, with the dinner table scenes carrying an uncomfortable family dynamic that many will recognise. She criticises the two young adults and their father (Raphael Kris), threatening them in order to keep the status quo that she is comfortable with. Mother is also seen as a force that the siblings are afraid of, manipulating outside forces to keep them contained, such as enlisting a therapist (Milly Anderson) who refuses to allow Hestia to take prescribed medication.

Hestia’s friends (played by Victoria Soh, Shehrzadae Moeed, and Ben Rook) all have very different ways of coping with their friend’s mental health issues. All three actors embodied this wonderfully, in a way that follows the overarching theme of selfishness, and wanting Hestia to be something that they aren’t.

My favourite part of this play was the fact that we, as the audience, were included in Hestia’s episodes – that Hestia could see us and begged us to help. This involved the audience in the story in an incredibly effective way, and gave a feeling of accountability that was difficult to shake. Why is nobody helping them?

I don’t think that this show can be separated from the incredible use of tech throughout. J Bhardwaj and Anna Choi expertly used a mixture of sound and lighting effects to create an immersive experience of Hestia’s episodes, so that we can better understand what they are experiencing. The buzzing heard during every vision is a recurring motif that ties nicely into the final scene between the two siblings. However, what really fascinated me was the use of gobos (lighting equipment that uses a small screen with patterns, in front of a light that shines through the pattern ) to create the idea of a swarm of bees were ever present in Hestia’s visions. By only suggesting the idea of bees and never showing them in a more obvious fashion, Hestia’s fear and later anger is allowed to take centre stage.

Co-directors Kate Moore and Olga Kwan, aided by associate director Ben WIllows, did an incredible job with this piece. The stage was kept simple in order to allow the actors to shine and, as a result, was even more impactful. Credit must also go to the two co-producers, Georgia Jones and Benjamin Southwick, in order to make this performance one to remember. Stage manager Carrie Cheung also did a wonderful job in making the scene changes some of the slickest that I have ever seen in student theatre.

By nature of this piece being by First Theatre Company, I can strongly state that this will likely not be that last we see of this incredible cast and production team. I’m excited to see what they do next, and I hope that if the bees ever do come, someone will sit with you until they pass by.