Kira Browne is moved by this fantasy-inspired production by Sussex-based charity Mankind. 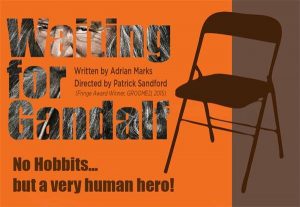 Upon entering the Assembly Rooms Theatre, instead of taking the usual seats in the auditorum, we were ushered through the theatre and welcomed onto the black-boxed stage. An audience of about fifteen people were greeted with a white wall and a performance space that was empty except for a life-size cut-out of Gandalf. After a slight delay, ambient traffic noise from the speakers started to set the scene. Little did we know, an intense emotional rollercoaster was about to begin.

Waiting for Gandalf is a one-actor, one-act play, written by Adrian Marks, directed by Patrick Sandford, and starring Chris Neville-Smith as Kevin. After running through the audience to take his place on his camping chair in the middle of the stage, Kevin starts explaining his love for The Lord of the Rings and his reasons for queueing up for the book signing the next day. However, we quickly start to discover that there is a more vulnerable and troubled side to Kevin. Anecdote by anecdote, his past is revealed and we realise what he has been through. The links between the ‘reality’ of the play and the ‘non-reality’ of The Lord of the Rings, are shown through direct quotations, references to key moments of the books, and a physical ring. This helps with the understanding of difficult, complex topics, while more light-hearted references and jokes release the tension and allow for an enjoyable yet hard-hitting play.

Neville-Smith portrays a very convincing and relatable character, through great use of voice and mannerisms. Marks’s brilliant writing never sounds stilted, but natural and realistic. As Sandford stated after the show, ‘we all have a wound’, and this makes the play and the protagonist relatable to every audience member, regardless of their specific experiences. They are drawn in from the very beginning through the use of rhetorical questions and the fact that Kevin shakes hands with the audience members, breaking the fourth wall and inviting them to enter the world of the play. This connection with the audience is complemented and increased through the choice of the intimate black box venue, very appropriate for an intense play dealing with such personal topics.

Although there were no set changes, scene and mood changes were successfully conveyed with the use of music and sound effects, such as snippets from The Lord of the Rings soundtracks and clocks ticking, played from speakers located behind the audience to give an immersive experience. Despite a couple of imperfect sound cues, due in part to technical issues, the sound effects were powerful. Less effective, however, was the lighting, which remained consistently bright, until a fade to black at the very end. Although this gave a strong focus on the protagonist, I felt that some variation in the lighting could have been effective, to reflect weather or mood changes, for instance.

Nonetheless, what stays with you from this play is the gripping script, the acting, and the interesting discussion of a serious topic, not the small quibbles over technical details. Indeed, the team recognised this by including a Q+A session after the performance, to give the chance to ask questions both about the play itself and the topics it addresses, as well as to discuss in more depth the work of Mankind, the Brighton-based charity who presented the play. They chose the medium of theatre in order to raise awareness of these issues by engaging with them in an accessible way, and this was definitely achieved with a fantastically engaging piece of writing, and a great performance.