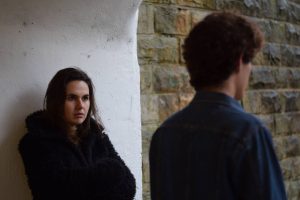 As the stage was plunged into darkness at the end of Pitch Productions’ Vincent River, it was as if I was able to take a breath for the first time since it had begun.  The play follows the story of ‘Anita’, a mother, whose son Vincent has just been murdered in a homophobic attack, and of ‘Davey’, who found the body. This intensely emotive production, set in the aftermath of an event that neither character is quite able to fathom, is incredibly impressive in its authenticity and skill.

As I entered the intimate Hatfield Chapel, its simplicity aptly creating the setting of a bare undecorated apartment, I was met by the sight of the two actors: Victoria Bull and Alexander Marshall. They were sitting in a strained silence which cloaked the audience as we waited for it to break.

Although the accents used by both actors suffered from some inconsistencies, the vocality in this piece was, on the whole, incredibly strong. The consistency with which Marshall captured the youthfulness of his character was superb. He began with churlish, juvenile obstinacy, reflected in his contained movement, restrained pout and low grudging tone, and moved slowly to excitement and vivacity, encapsulated in his excellent voice modulation. His performance culminated in painful confusion; he knelt on the ground surrounded by the sickeningly real image conjured by the words he spat out. This was effectively balanced with Bull’s ‘Anita’. The angry, defensive mother at tipping point after the murder of her son was beautifully and poignantly captured by Bull. The persistent restlessness that initially characterised Bull’s movements and speech lapsed into stillness and a heart-breaking outer calmness as the piece comes to a close, perfectly contrasting the development of Marshall’s ‘Davey’. The difficulties that can arise from a two-hander made up of many lengthy monologues disappeared in the face of the exquisitely detailed performances of both Marshall and Bull, and the fascinating relationship that was built between their characters on stage.

Director Anna Haines should be commended for the creative and engaging way in which the stage was used in this production. The challenge of having only two actors to fill the space was met head on by using different levels and corners of the stage throughout. The way in which the central furniture –  the sofa for ‘Davey’ and the armchair for ‘Anita’ – were used,  creating  safe havens for them, at times acted as a kind of reset button, allowing them to reel the character back in so that the energy naturally built and diminished. The most striking use of the stage however, was the decision to make use of the wide central aisle. As the setting for both the journey that ‘Anita’ recalls, and the journey that ‘Davey’ relives with ‘Anita’ hovering close behind him, it helped to draw the audience in even further, and made their stories all the more intoxicating.

The decision to use only one piece of sound in this production was perfectly in-keeping with the simplicity of both the lighting and sound throughout, which allowed the focus to remain on the acting. Marshall’s outpouring, however, was very effectively juxtaposed with the sweet voices and peaceful messages of Christmas carols, allowing the monologue to reach new heights.  Nonetheless, it would have been better, perhaps, to have the carol singing morph into the instrumental tune, to avoid distracting from his words once this point had been made.

Overall, everyone involved in this production should feel incredibly proud of their hard work on this moving and gripping piece of theatre, and I would highly recommend spending a worthwhile evening watching this show. Vincent River has two more performances, and with a portion of the ticket sales going to the LGBT foundation, you’ll be supporting a fantastic charity at the same time.

Vincent River will be playing in the Hatfield Chapel at 7:30pm on the 17th and 18th January