Abby Hubbard is moved by Pitch Productions’s performance of ‘Us/Them’.

Extending effortlessly upwards, the spacious Hild Bede chapel elevated the fairly simple set of Pitch Productions’ Us/Them, the crude chalk drawings on the floor mapping out a school—School Number One, the site of the 2004 Beslan school siege—jarring with the sleek curves of the chapel’s white ceiling. Already, as the audience filters in, watching Romilly Carboni and Fionna Monk in role as ‘Boy’ and ‘Girl’, we are aware of an unsettling detachment from reality, as the large, echoing space for such a small cast creates an ominous sense of possibility. In this realm of possibility, childlike fantasy and the dangers of terrorism are juxtaposed, forcing the audience to face the reality that terrorism does not discriminate by age, and dramatising the effect of such horrors upon the child’s imagination and innocence.

Directed by Max Greenhalgh, the play sustained this juxtaposition between terror and playfulness effectively through physical theatre and a careful manipulation of tone. As the boy and girl describe the horrific scenes of the siege, they are in constant 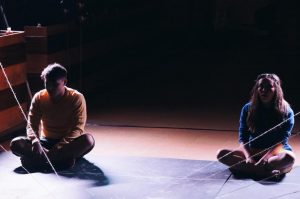 flux between a serious relay of information and a childish, mischievous excitement. Whilst in one moment they list the often horrific facts with precision and detachment, in others they play with a toy tractor, or laugh about breasts. A difficult contrast to bridge, it must be said that at times, although the designed aim of these stark changes were clear, they were jarring to the point of dislocation, distracting from the play itself. However, throughout the majority of the performance, such juxtapositions were controlled, such as when enacting the terrorists changing role every two hours: the children’s cyclical movements sped up steadily, transforming from a mechanical reproduction of the terrorists actions, until they gleefully and energetically competed against each other as children, demonstrating from both actors and director a skillful handling of both tone and pace.

Possibly the most effective—and certainly the most chilling—moments of the play, were when the two registers of information relay and playfulness gave way to a third: pure terror. Here, the technical team led by Helena Trebichavska must be especially commended. The use of pure blackout whilst the screams of the children reverberated around the chapel was truly frightening. In another scene, the lighting changes to red, the brightness diffusing through and obscuring parts of the venue, disorientating the audience as we see and listen to the children describing hallucinations.

This scene is just one of many which demonstrates the actors’ versatility: both Carboni and Monk portrayed their characters with great success. Monk captured a childlike essence with intense focus and precision: from head to toe she embodied her character physically and vocally. A few minor fumbles over lines unfortunately seemed to occasionally distract Carboni, however he likewise managed to capture childlike excitement and fear in his performance. I occasionally felt that a few lines 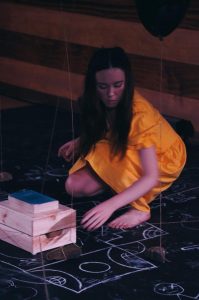 needed more exploration, especially in Carboni’s portrayal of Boy: from time to time it felt that his delivery became monotonous. Yet overall, both actors were convincing and compelling to watch, mastering the play’s complex mixture of physical theatre and naturalism.

The production’s use of props was highly effective: although the strings which represented the wires of the bombs presented the actors with some trouble, intermittently falling from where they had been stuck to the pews, they were in all other respects a brilliant prop, representing both danger and fun as the children weaved under and over them. Likewise, the balloons, with the ever-present possibility of popping, served their purpose well, and added to the tense atmosphere, as they swayed slowly between Monk and Carboni. The use of chalk was also well done, contrasting childish drawings with scenes of horror, especially as the drawings gave way to writing down workings out of the ratio of terrorists to hostages, or writing out a list of the terrorists’ demands.

Overall, Pitch Productions Us/Them is a highly successful production, truly engaged with the contrast at the heart of this troubling play which forces its audiences to come face to face with the reality that childhood innocence cannot be wholly protected from the horrors of terrorism. Despite some minor problems, the play ultimately achieves its aims, and is a stunning piece of student theatre that I would highly recommend.

Us/Them will be playing in Hild Bede Chapel on Saturday 24th and Sunday 25th November at 8:00pm.