Sophie Wright is charmed by the Durham performance of CTC’s forthcoming UK and US Shakespeare tour. 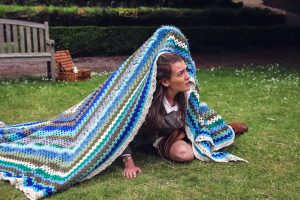 It’s that time of year again – Castle Theatre Company’s summer Shakespeare tour has begun an amazing run of Twelfth Night in Fellows Garden at Durham Castle. While not without its minor flaws, the production was fantastically upbeat, musically ingenious, and hilariously entertaining.

The refreshingly capable ensemble made the performance for me, full of expression, energetic and capable of handling the text in a manner that made it (for me, a Twelfth Night novice) very accessible. Viola, played by Emma-Louise Howell, was the grounding centre of what was otherwise a gently madcap series of misunderstandings. Howell’s delivery of the line ‘I am the man’ was perfectly bewildered, and summed up her performance in its unassuming grounded nature. She was, however, difficult to hear upon occasion; whilst the whole cast fell victim to the poor outdoor acoustics of Fellows Garden, it was possibly the most noticeable with Howell. While I am frustrated that the play itself seems to skim over Viola falling in love with Orsino, that isn’t the production’s fault and the actors made sure that the audience (particularly Twelfth Night virgins like myself) were kept in the loop. Zac Tiplady as Orsino was solid, but the stand out moment for me was his fascinating reaction to Viola’s vague mentions of a love interest.

Jasmine Price deftly painted the uptight, easily fooled Malvolia with a tightly-bound performance that showcased both her ability to perform an entertaining monologue with ease, and marry it with a physicality that elicited laughter every time. Similarly, Dan Hodgkinson’s Sir Andrew partnered a constantly surprising delivery of the text with a consistently seamless stage presence and characterisation. His moments on stage with Emily McLean, as Maria, and Danny Booth, as Sir Toby, were some of the production’s highlights. Both Booth and McLean delivered strong performances, too – Booth’s drunken outbursts in the face of McLean’s annoyed sternness in the beginning melted away to a blossoming romance that I absolutely believed. Steph Sarratt had a refreshing take on Olivia in a way that made me really sympathetic to the character. She was charming, funny, and most importantly, her affections of love felt so empathetically believable, the audience were on her side.

While acting almost as the audience’s pseudo-narrator, Barney Mercer as the fool had both some beautifully sung moments with the musicians, as well as an enjoyable comedic performance. However, he did tend to speak a little too quickly which meant his lines got lost in the size of the gardens. Theodore Holt-Bailey as Sebastian was also excellent to watch, best in his interactions with Antonio, and with Viola at the end. He didn’t fall into the rhythm of Shakespeare as easily as the other cast members, but it was a charming performance nonetheless. A brief but excellent delivery of Antonio was provided by Lewis Russell; a surprising highlight of the show for me was his confession of love to Sebastian and the resulting gentle heartbreak. Russell handled that with skill evident in his short sojourn on ‘stage’.

My heart was stolen by the musicians. Georgie Proctor as musical director composed the entirety of the production’s music herself, a folksy vibe carrying throughout the show. She even incorporated themes for characters into the transitional music, and for me that pulled the production together and elevated it to a more professional level. Her and actor-musicians Max Halcox and Tom Knight should be heartily congratulated for what they brought to the show. 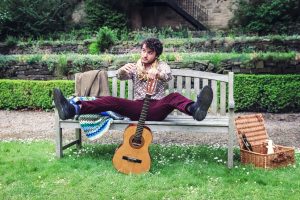 The outdoor staging was neatly incorporated into the action; actors hid behind rows of bushes, or practised their declarations of love to trees, all while the main action happened centre-‘stage’ on the lawn. Occasionally it felt as though actors accidentally blocked each other, but I must emphasise how slick some sequences were. One example was Dan Hodgkinson coming towards the ‘stage’ through the audience, leaping towards Theodore Holt-Bailey, and missing dramatically. The aesthetic of the production, again, slotted neatly in with the music and the outdoor environment of the production. Tweed jackets, flat caps, and clean white and black lines all worked well together – even the pattern on Malvolia’s yellow socks matched Sir Andrew’s pink tie.

No show is flawless, however, and this was no exception. I do have to say that any flaws that were present did not remain with me for long. Any delayed or clunky line deliveries were forgiven by the audience very quickly. Twelfth Night is not what I would call a ‘mind-blowing’ show, but it suited the tone of a summer outdoor Shakespeare production.

On the whole, I thoroughly enjoyed CTC’s Twelfth Night, for its strong performances, musical strengths, and the sheer joyful and charming vibe of the production as a whole. If you get the chance, please go and see this fantastic show and support an amazing production before they head off around the UK and the US during the summer.

Twelfth Night will be playing in Fellows Garden on the 16th June at 2:30pm, and in Ushaw College on the 17th June at 1:30pm, before embarking on a UK tour in July and a US tour in September. Tour details can be found on the Castle Theatre Company website.