Funny, dark and deeply moving, Polly Stenham’s Tusk Tusk is masterfully presented by Fourth Wall Theatre. The play presents us with the seemingly innocuous picture of three children aged fifteen, fourteen and ten alone in their flat; however, the absence of parental figures lurks in the background from the beginning. The darkness of the story is offset by the playful physical portrayal of the childish characters, and their lack of understanding or denial of their situation keeps the audience on edge. Performed in Kingsgate, the space, while seemingly not ideal for theatre, helped create the intimate atmosphere of the apartment. The audience on two sides as well as the simple staging gave the audience the impression not that they were watching a play but rather looking through a window into someone’s life. This sense of realism was one the play managed to maintain extremely successfully through the naturalistic acting style. There were a few tech issues as the beginning with 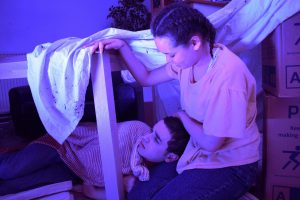 sound, and the feeling that the cast was warming up in a few early scenes; by the second act however, the production delivered scenes of authentic emotion truly wonderful to see in student theatre.

The most powerful thing about the show was the success with which the cast created believable family relationships. While presenting children onstage often risks being hackneyed and overplayed, the actors capture the balance between playfulness and maturity in the three main characters. Both Ariana Van Biljon as Maggie and Max Greenhalgh as Elliot portray the tension of children struggling to behave like adults. Van Biljon gives a standout performance, showing the conflict between her character’s frustration with her brothers and her tendency to motherly care and pragmatism, as well as her childish petulance and playfulness, as demonstrated by the moments she gets swept up in their games. The realism of her acting, such as in the final monologue where she admits the guilt of having potentially been the reason for her mother’s disappearance is remarkable, aided by the directorial decision to have her simply sitting on the table with no movement. Her relationship with Elliot is shown to be co-dependent to the point of potentially incestuous, a tension which is played out to keep the audience feeling slightly uncomfortable. The scene when she cradles Elliot in her arms convincing him she is their mother is deeply moving and disturbing. Greenhalgh convincingly creates the character of the teenager trying to act as the head of the family. His versality is admirable, as he is able to act the funny rude teenage boy, the reassuring father figure and, most disturbingly, the young man overwhelmed to the point of physical violence for what he sees as a good cause. His girlfriend, sweet and well-meaning Cassie (Maddie Lock), seems to embody the outsider perspective of the audience, posing a threat to this dysfunctional yet deeply caring family unit. Alex Cohen as ten-year old Finn has an infectious energy that is just enjoyable to watch. From his first entrance in nothing but his underwear clutching a plastic gun, he embodies the gullible, playful and vulnerable nature of the oblivious child. By the end of the first act, I really did believe these characters were a family, which is so important to the play; these characters are everything to each other, as they keep reminding each other, and this made the 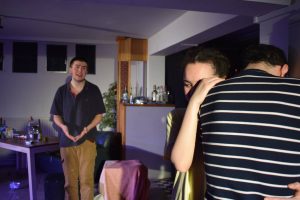 threat of their separation palpable for the audience.

In a moment of tension within the second act, Maggie confronts Elliot in his refusal to accept the reality of their mother’s desertion, shouting ‘None of this is real to you, is it?’ This theme of reality is masterfully explored throughout the play, as director Iz McGrady and assistant director Olivia Swain conflate harsh realism with the magical optimism and imagination of the child. In truly heart-warming moments from Maggie and Finn building a blanket fort under the table to the game of red Indians, the children attempt to understand their situation in fairy-tale like terms. However, this makes the moments when this fragile reality is shattered all the more heart breaking. The moment where Finn falls from the table and is injured is particularly harrowing, with his screams echoing through the room. The dark comedy is marked and well delivered through moments such as the horrifying comedy of Finn coming to grips with death by accidentally killing a mouse he meant to give Elliot as a birthday present. The hypocrisy of the adult characters such as such as Roland played by Auguste Voulton and Katie played by Meg Roche is painfully comic next to the truthfulness of the child characters. The shifting tone leaves the audience feeling disoriented and unsure who to trust. The ending is bittersweet, combining relief over the three siblings choosing to stay together with a fear for what their future will hold. Tusk Tusk is a gripping, engaging and superbly acted piece of realist theatre, which I would go and see again.

Tusk Tusk will be playing in the Kingsgate Room in the DSU at 7:30pm on Saturday 16th and Sunday 17th March.