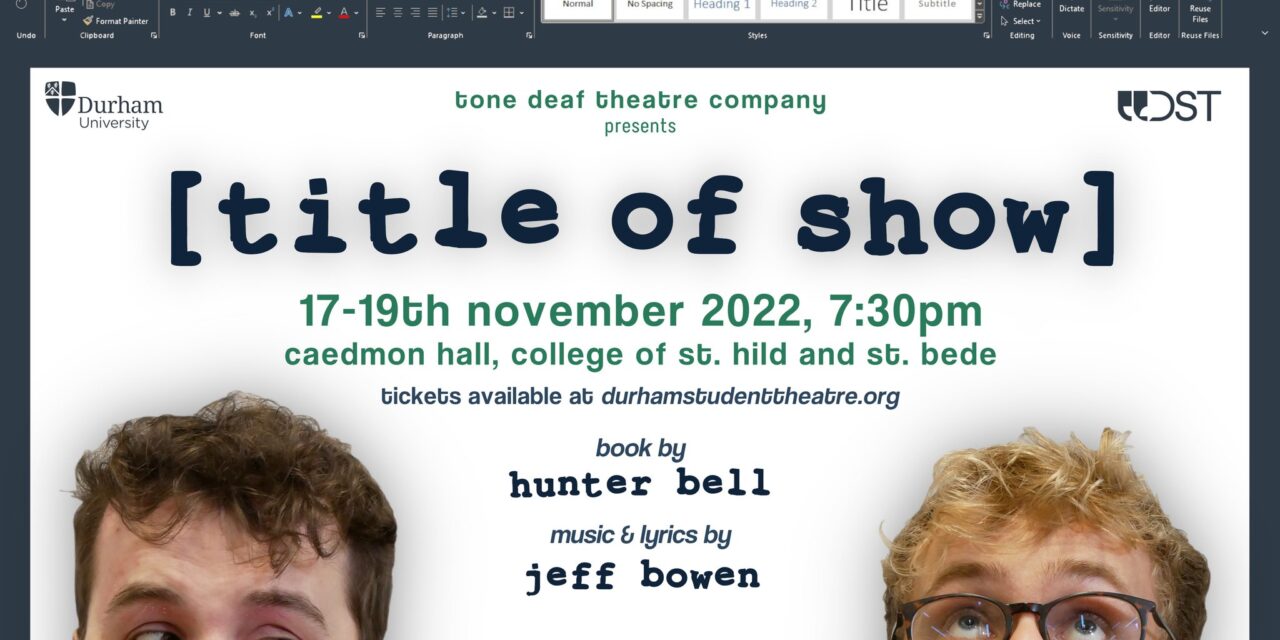 “With just 4 chairs and a keyboard as their set, the cast and crew created a magical bubble of wholesome fun about creating art”

Tone Deaf Theatre Company’s [title of show] was an extremely well-done feel-good exploration of a creative process that felt like a big, warm hug. Directed by Alexandra Hart, and assisted by Jennifer Lafferty and Alexa Thanni, the meta-dramatical musical follows the story of Jeff and Hunter, two struggling writers, and their hilarious and honest journey of writing a musical together. With just 4 chairs and a keyboard as their set, the cast and crew created a magical bubble of wholesome fun about creating art.

Staged in Caedmon Hall, the minimalist and intimate stage immediately gives the audience an understanding of cramped, scrappy New York, where the musical is set. Lighting designer and operator James Stevenson does a wonderful job of highlighting time and space as well using different colours and lighting position, although I did find the occasional off-centre lighting quite distracting at times. That being said, the production elements did an exceptional job in highlighting the mood and optimising the emotional impact that is being conveyed on stage.

I’d like to commend the cast for the energy they bring into creating such memorable characters. Oscar Scott, playing Hunter, brings out the best of the light-heartedness of the musical, and I felt extremely drawn to the humour he highlighted through the delivery of his lines in the musical. Jeff, played by Harry Allderidge, was no less impressive with his range of emotions and expressiveness. Aldridge created a character that evoked empathy, and did an excellent job expressing his dreams and struggles throughout the musical. The chemistry between the two was through the roof, be it during the funnier moments or the more serious one – their “Part of it All” duet not one to be missed. This energy facilitated the entertainment level of the musical to the highest it could be.

The “secondary characters”, Heidi and Susan played by Lucie Fletcher and Issey Dodd were no less dazzling on stage, as they built their own chemistry between themselves and with the two writers. Fletcher’s portrayal of Heidi was masterfully cheery and entertaining, and I particularly loved her beautiful delivery of “A Way Back to Then”. Dodd also did splendid work of contrasting while at the same time complimenting Fletcher’s energy on stage with the strong sense of individuality in the way she carried herself, but also projecting kindness in a unique, Susan-like way. I found that their “What Kind of Girl is She?” was particularly skillfully devised, optimising the relationship and chemistry between the 2 actresses.

The actors did not use any microphones, but the voice projection was exceptional throughout the entire show. Under the guidance of Co-Musical Director Lengana Mashaphu and accompanied by Co-Musical Director Carolyn Leung playing the piano, the cast delivered amazing ranges of musical numbers that were both funny and jaw-dropping. “Die, Vampire, Die!” deserved a special mention for its creative, funny and seamless execution, while still conveying extremely important and real human experience.

Overall, [title of show] was a charming, intimate, feel-good musical that was skillfully crafted, and the care and love that the cast and crew put into this was conveyed through every single second of the musical.