The Traveller’s Tale, the latest offering from DOE, is a piece comprising of previously written (and largely very well-known) pieces of music, woven together by a new script, written by co-directors Alabama Jackson and Ava Merrell. The chosen setting for the evening’s entertainment was Castle’s Great Hall, with the play performed in the thrust, and the 28-person orchestra accompanying from beneath the great north window.

The orchestra burst into life with a rendition of the great overture from Strauss’ Die Fledermaus, instantly setting a high standard of musical expertise which was unwavering throughout the evening. The show opened, to the tune of two Gilbert and Sullivan numbers, with our two leads (Lewis Russell’s Ben and Poppy Metherell’s Lily), strangers to one another, graduating from their respective schools, each to head off travelling. A cleverly conceived aeroplane scene contained one of the musical highlights of the evening: Lauren Ottoviani’s highly impressive taming of Cleopatra’s intricate aria ‘Da Tempeste il Legno Infranto’ from Handel’s Giulio Cesare.  This scene was one of a few to ingeniously interact with the long, narrow performance space afforded by the thrust staging, transforming the space into the interior of the aircraft. The ensemble scene, wherein our 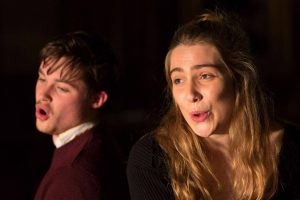 two heroes first meet, to the Waltz from Die Fledermaus, also made effective use of the space, with the long shadows of the darting ensemble actors, all clad in black, melding together allowing us to see the two protagonists, in colourful clothing, quite clearly. At other times, however, the staging compromised sightlines, and I was one of many spectators craning my neck to keep track of the action. This largely came about due to the vast number of performers on stage at once, and at times entire sequences were lost. This was not aided by the acoustics of the vast space, meaning that some dialogue was lost as well as moments of the action.

Ben and Lily attend the opera in one scene, going to watch Bizet’s Carmen. At this point Russell and Metherell became audience members as well, enjoying a scene which marked the moment that we, the rest of the audience really bought into the production: a performance of the renowned ‘Toréador, en garde!’ number, led by the consistently excellent Adam Brown, aided by his bovine friend (Rory McNeilage). The scene was, as all the ensemble scenes were, meticulously choreographed, musically accomplished and entertaining. Another highlight of the first act came at its close, when the two characters are forced to part from one another, accompanied by Mascagni’s ‘Easter Hymn’ from La Cavalleria Rusticana, performed with a 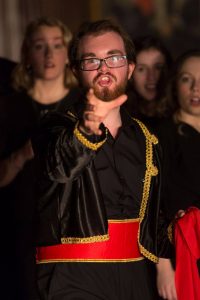 funereal melancholy, that, while musically staggering (notably a spine-tingling performance from Poppy Metherell, one of the musical stars of the show), felt a shade overblown given the relatively mild nature of what was occurring. This was one of a handful of moments where the story threatened to give way to hackneyed tropes, others occurring in some of the scenes wherein narrative is progressed through letters written by our heroes to friends at home. These were, however, largely wrested back on track by Russell, a clear standout in acting terms, who just about managed to convince us to invest in the characters and their romance.

The second act’s music was easily as beautiful and impressive as the first, with highlights including ‘Libiamo ne’ lieti calici’ from Verdi’s La Traviata, the Flower Duet from Delibes’ Lakmé, and, most notably, the stunningly beautiful ‘Che Soave Zeffirito’ from Mozart’s Le Nozze di Figaro, performed by the potent combination of Metherell and Ottoviani, whose vast individual talents married perfectly here. Script-wise, however, the second act felt slightly rushed, and after a sudden three-year time jump and an unaddressed moment of baffling serendipity, the show quickly reached its close.

The Traveller’s Tale was undoubtedly spectacular, and clearly a labour of great love, with extraordinary musical ability on show, from the onstage performers and the orchestra, who played as great a part as any actor. The time and effort put into the show paid off, and it was slickly executed, even if at points the narrative thread erred on the side of contrivance. That did not, however, detract from what the show was: fabulously entertaining, well put together, and full of beautiful music. At no point did I feel any sense of boredom, and I’m happy to guarantee that all those who make the wise decision of going along will greatly enjoy themselves.

The Traveller’s Tale will be playing in Castle Great Hall on Saturday 17th November at 8:30pm.