Sophie Boddington is mesmerised by Sightline Productions’ post-colonial take on ‘The Tempest’.

As a lover both of fantasy and of Shakespeare, it is safe to say that when I heard about this dynamic and post-colonial take on The Tempest, my expectations were set high. While there were some issues regarding vocal clarity and some of the cast got lost in the din, it proved to be an enjoyable experience that I am happy to recommend.

The audience entered through the gap between beautiful, patterned fabrics hung like stage curtains – Chowdhury and her production team should be commended for their clever use of space, as this set feature not only presented a fantastical image of the island, but allowed for fairly smooth transitions between scenes without blackouts.

Despite this impactful beginning, I found that the actors took a little while to find their stride. The acoustics of Hild Bede Chapel were challenging, particularly in combination with the rhythmic drumming and chanting which accompanied the first 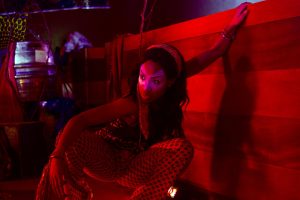 scene, and I think the cast would have benefited from better articulation as their voices were at times overcome by the cacophony of noises.

Nevertheless, there were some extremely strong performances. Sophie Cullis as Caliban was the stand-out, combining a grotesque body language with truly pathetic dialogue which made me sympathise with the monster as a tragic character. Indeed, while I do not wish to discredit Florence Petrie’s Prospera, who did command the stage with her proud posture and condescending sneers, I don’t think her presence was visible enough throughout the play, perhaps as a result of several scenes being cut out. I often felt like this play belonged more to Caliban than its leading heroine – whether this was a deliberate artistic choice of Chowdhury as part of her post-colonial premise, I’m not sure.

Another favourite was Jack De Deney as Antonio; the devilish glee he took in his wicked machinations was palpable, and his unapologetic malevolence was a delight to watch. But the longest and loudest laughs by far came in Esther Levin and Alex

Ottie’s scenes as Stefano and Trinculo – from their dazed facial expressions to their drunken swaggers, they added hilariously light relief to some of the heavier scenes in the play.

On the whole, I felt the production was at its best when it focused on the original inhabitants of the island. The tripartite performances of Aarnav Sharma, Lucy Little, and Helena Baker as Ariel were synchronised and physically breathtaking, from their graceful movements to their costuming and makeup.

Though the play was cut significantly to allow for a shorter running time, I was largely held rapt, and I could have easily enjoyed more. If you are looking for a play will not only make you laugh, but also make you think, you couldn’t do better than The Tempest.

The Tempest will be playing in Hild Bede Chapel on Saturday 1st December at 7:30pm.