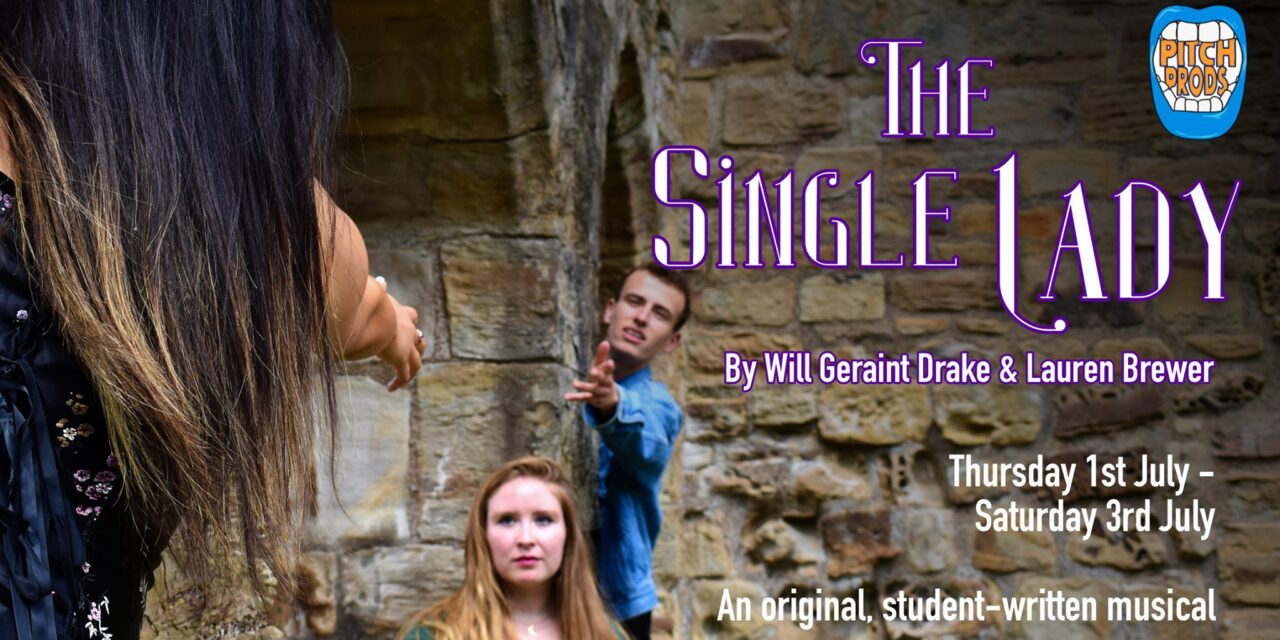 What a way to make a debut! Will Geraint Drake and Lauren Brewer’s The Single Lady opened at the Drayton Arms Theatre in London on the 1st of August for a two-night run. This collaboration between Pitch Productions and Break the Rules Productions exemplifies some of Durham’s most astounding writing talent. Drake’s music is brimming with catchy melodies and intricate harmonies. Brewer’s book and both their lyrics do an excellent job of creating humour and drama with equal effect, such as Liz’s emotional audience addresses or the numerous pop culture references and innuendos.

This show follows one of the nation’s worst kept secrets: the love triangle between Queen Elizabeth I, her courtier Robert Dudley, and her cousin/best friend Lettice Knollys. Drake and Brewer’s new musical examines the dynamics between these three as well as the devious character of ‘History’, personified to remind Liz and the audience of his power and hers.

Our “Leading Lady”, Flo Lunnon, flourishes at every instant, with remarkable range, belt, and vocal dexterity. Tomos Wyn’s stage debut as History has immaculate characterisation: perfectly detestable, with witty one-liners and overflowing sass. Vivienne Shaw’s performance as Lettice Knollys is sultry as anything and filled with challenging riffs. Meanwhile, Sam Jones’ Dudley is a believable cad, albeit one with an amazing voice and commanding stage presence. Completing the cast is Oscar Scott, whose time on stage is short and sweet, but he injects humour each entrance, and his harmonies behind the scenes don’t go unnoticed.

In spite of a sparse set, this show’s tech was still strong. Its lighting (courtesy of Charlotte Beech) perfectly complements the staging and choreography. Its costumes blend modernity with period, very appropriate for Drake and Brewer’s music. All the transitions were dynamic; thanks, no doubt, to the prod team lurking behind the wings to aid the cast in moving props and furniture.

The Single Lady showcased five of Durham’s strongest vocalists (or at the very least five of the strongest I’ve seen) – they all shine, executing difficult harmonies as though they are nothing.  However, this doesn’t come without a price: at times the acting is overshadowed by the music. While the cast are such singing powerhouses, the dialogue doesn’t always rise to the same standard that the music sets. There were a couple of somewhat longer pauses and some scenes lagged a touch but this could be down to the ‘Covid’ of it all. Whatever the reason, the quality difference means that the switches between dialogue and song could come off as jarring. Indeed, at times the actors’ diction could slip when their rapping accelerating. However, this was only a minor deficiency, and the general gist always came through.

This show’s few shortcomings are a price I’d happily pay to watch it all over. Everybody onstage sparkles and everyone offstage has clearly poured gallons of effort into it. Should this spectacular show make its way to Durham, I’ll be the first in line for a ticket.