Tegan McNicholas is confused by the world presented in Cuth’s Drama Society’s The Pillowman.

This weekend Cuth’s Drama Society bring The Pillowman to the Durham Union Debating Chamber. The play follows Katurian, a short-story writer living in a police state, as he is interrogated by two policemen about the similarities between his tales and some gruesome child murders. The primary difficulty the production encountered was establishing that The Pillowman’s world is not our world, it is a dystopian police state with different morals and a different justice system. The production’s neglection of this did make the play seem, at times, a little too far-fetched and bizarre. However, Alexander Cohen and Joe Pape were superb in their roles, and overall, I enjoyed the absurdity of the play. I thought its chilling confusion of fantasy and reality was excellently staged and executed.

The small size of the Debating Chamber and its audience made an intimate venue, furthered by the use of thrust staging. The feeling of claustrophobia this caused helped to make the play uncomfortable and increased the personal and tragic element of the stories shared. The bright, white lighting used to illuminate the interrogation room left the characters brutally exposed which tied in wonderfully with the gradual exposure and careful exploration of not only Katurian’s character, but of Tupolski and Ariel too. The shift to an eerie green-blue lighting to frame the stories was perfectly executed, ensuring a departure from reality that gradually became less and less clear as the play progressed. The lighting changes were accompanied by an unnerving instrumental which succeeded in placing the audience on edge and suited the play’s tone very well. The props used were ridiculous, furthering the peculiarity of the play. A fake cigarette used in the first scene was ‘smoked’ for over ten 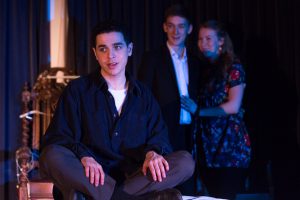 minutes, and the character smoking did not once smoke again in the three hours following the scene. The five toes, supposedly from a little boy, were ludicrous in size and hugely unrealistic which made it quite difficult to take the gruesome story seriously. Alexander Cohen should be commended for his success in acting quite so shocked at the production of these plastic lumps, but unfortunately the audience found this hilarious rather than shocking. This was successful in furthering the overall absurdity of the production, yet the laughter didn’t quite seem to tie in with the potentially horrifying action occurring onstage. The torture-chair was a strange contraption and it was difficult to sympathise with Katurian’s fear of it, merely a chair partially wrapped in tinfoil with what appeared to be a colander used as a hat. Although this contributed to the creation of the play’s bizarre alternative world, the failure to do this elsewhere unfortunately detracted from its success. Despite this, the stunning performance space, covered with UV paint, successfully reminded us of the child-like nature of the story, yet also emphasised its dark undertones. The UV lighting used at various times to highlight this was ghostly and unnatural, contributing to the overall absurdity of the set and the play as a whole.

The actors took a little time to warm up, with the standout performance in the first scene delivered by Alexander Cohen. His uneasy laughter and avoidant eye-contact perfectly encapsulated his character’s nervousness. However, his tense attitude wasn’t particularly understandable as the policemen merely came across as quite strange, and not especially scary. Perhaps this was due to McGrady and Redmond’s address of most lines directly to Cohen; this difficultly opening up and engaging the audience might have caused us to miss their facial expressions and also failed to make the two seem particularly intimidating. Additionally, the occasional onstage violence seemed fairly contrived. However, both actors’ characterisation drastically 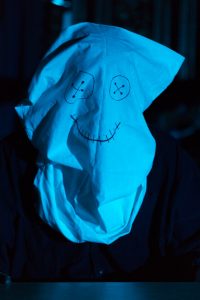 improved as the play progressed and they settled into the roles. McGrady’s projection was impressive and her delivery of the story regarding the gibbet was engaging and entertaining. Similarly, Redmond’s delivery of his monologue towards the play’s end was impressive and fast-paced while the rapport between the two actors, as well as between them and Cohen, built immensely well throughout the play. I only wish that the two had settled into their roles a little earlier, but overall I enjoyed their performances immensely.

The play really came into its own with the scene between Katurian and Michal, played by Cohen and Pape. The characterisation of the two brothers, achieved through physicality and voice, was impressive and the two actors built up a stellar rapport through their reactions to each other which truly captured the audience’s imagination. Cohen’s story-telling was unparalleled; through vocal range and facial expression he delivered sensational tales that arrested the audience, while Pape’s reactions were humorous and well-delivered. Overall, the dark comedy in this scene was excellently handled by the two actors; the audience found ourselves laughing uncomfortably throughout.

Overall, I commend the directors and actors on their treatment of a difficult play. I would recommend the production to any fans of dark fantasies and absurd plot-lines, even if the failure to distinguish the world of The Pillowman from our own is, at times, confusing and odd. I enjoyed the bizarre merging of imagination and reality explored, and admired the dark humour that was excellently delivered; I look forward to seeing other performances featuring the actors involved in the future.

The Pillowman will be playing in the Durham Union Debating Chamber on Saturday 17th and Sunday 18th November at 7:00pm.