Natasha Ali is drawn into the fraught emotional world of Letterbox Productions’ ‘The One’.

Why do people stay in so obviously flawed and unstable relationships? Are minimal amounts of lust and love really enough to mask the hate that can fester from knowing someone too well?

Can good people do bad things to each other?

The One by Vicky Jones is a challenging play about relationships, sex and all the ways they can turn people into the ugliest versions of themselves. Powerful, for sure, but with lots of overlapping dialogue and dangerous topics it can be hard to block and present in a realistic way. Luckily for this production, Sophie Cullis and Rahul Shah’s direction has led to a well staged, compelling story with clear ideas and themes.

It starts as soon as you walk into the Birley Room, a perfect choice for this play, and see Jo and Harry sitting in a living room casually watching David Attenborough. After a slightly awkward sex scene we begin an hour of quick-fire arguments, tragic reveals and degrading humanity all cumulating in a few big questions. Should they reallybe together? Do they even like each other anymore? Are they happy?

The use of increasing wine bottles and glasses easily show how drunk the characters are actually becoming. This makes it less 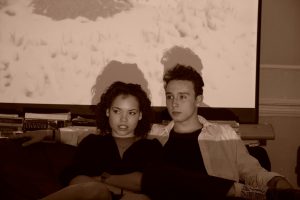 jarring when despicable and abnormal things are said or done. Choices for the TV shows all tied into the story being told and transitions between scenes didn’t feel awkward at all. The entire room was used, with characters entering and leaving from the back and because the audience are at the same level as the stage, the whole setting felt enclosed and claustrophobic. For a play like this, that is a very, very good feeling to have.

All the actors did a brilliant job with their morally ambiguous characters. Aaron Rozanski’s outbursts of sadness and anger were believable as hell and added a worry that Harry could explode at any time, making for great tension in an already high energy plot. Esther Levin’s pathetic but heartfelt Kerry played well off the main couple and her horror at Harry and Jo’s dynamic helped the audience see just how damaged their relationship had become.

However, the standout performance here is from Ariana Van Biljon. A devilish, likable monster, Jo’s psyche and character is flawlessly navigated by Biljon’s inflections and facial expressions. Her flareups and witty comebacks are expertly presented and add comedy in an otherwise dark and twisted show.

Jo and Harry’s chemistry, while a bit lacking at the beginning, heavily built up throughout the performance as the actors got more into their roles. The sex, arguing and intensity of it all gets you completely sucked into this mess of a relationship and 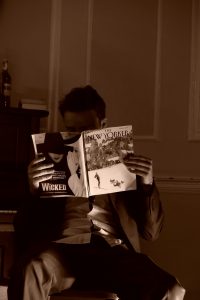 you end up caring if they are in fact going to break up or not. You sense the genuine love these two both have for one another underneath the pain they’re inflicting. It causes the question of whether they should be together or not to be much harder to answer than previously anticipated.

While the high and low points felt very realistic sometimes the transitions and build ups between the two were a bit rushed and sporadic which didn’t work as well right at the beginning when the characters were still sober. I would’ve also liked to see more movement in conversations, especially the more intense ones as for the most part they stayed in one location each time.

Although at times the dialogue didn’t feel as natural as it could have, in the end this show is an intimate, dread-inducing watch that leaves you feeling both satisfied and uncomfortable. I would definitely recommend it.

The One will be playing in the Birley Room in Hatfield College at 7:30pm on Tuesday 11th June.