Larry Kramer’s The Normal Heart is a play that tackles huge themes head on: issues of gay rights, Jewish rights, and, of course, the AIDS crisis. Focusing on the impact of AIDS on gay men in New York City in the 1980s, the story is based on real 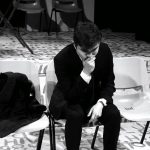 events and people from that time. This is a challenging play to put on in Durham, and Director Sophie Wright deserves commendation for her efforts, as Fourth Wall Theatre have certainly created an emotive and thought-provoking production. However, during the performance it sometimes felt that Wright and her team had bitten off more than they could chew. The issues confronted in this play need to be dealt with elegantly and sensitively in order for the production to be a success, and whilst there were some glorious moments within Fourth Wall’s production, there were other times in which the execution needed more attention, and it felt as if the production was almost relying on its poignant subject matter to carry the performance.

Undoubtedly, the history of gay men and their relation to the AIDS pandemic is important, and definitely something worth sharing through theatre. However, attempting to put on a play that calls for eight male actors and one female is arguably not the wisest move in Durham, particularly before exams, when fewer students are willing to audition for plays anyway. It is no secret that DST has far more female members than male ones, and it seems a shame to have to cast actors into roles which they do not quite fit, simply because they fulfil the ‘male’ requirement. Having said that, there were some excellent performances. Andrew Shires portrayed the multi-faceted Ned with real emotion and flair, whilst Alexander Marshall, as Mickey, came into his own as the play progressed, delivering a beautifully impassioned monologue. There were some problems with delivery from all the actors—all of the cast members could do with projecting more, particularly at the beginning, and Andrew Shires should be careful to maintain clarity in some of his more fast-paced sections. In addition, there appeared to be varying levels of success when it came to American accents—those of Patrick Palmer and Andrew Finn as Ben and Felix respectively were convincing, but the other performers’ natural accents were sometimes detectable. 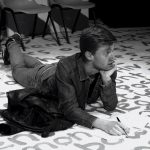 The highlight of the play was the palpable chemistry between Shires’ Ned and Finn’s Felix; the pair were utterly endearing, and their early scenes were both excellently directed and believably performed. It was these charming, intimate moments where both the director and the cast appeared to be in their element, whilst the big ‘issue-driven’ scenes lacked the same authenticity. Ned and Felix’s amusing and beautiful love story managed to engage the audience through a fairly long and serious drama, and for that Shires and Finn deserve credit.

A minimalist set allowed the play to move easily through the various locations the script called for, and the creative team furthered the fluidity between scenes by making the decision to eliminate blackouts. This was largely effective, as it meant that the pace was kept up throughout, and the blackouts at the end of each act were more meaningful. However, the actors had been directed to walk on just before each scene started, which meant that sometimes characters would enter scenes they were not part of, causing confusion, and also signalling the end of scenes prematurely. Also, at points, actors would come on much earlier than they were needed on stage, sometimes moving set while action was happening elsewhere onstage. Whilst the idea of displaying the duality of more than one event occurring at a time is interesting, it only really worked at the beginning, when we were simultaneously shown both Emma’s surgery and the waiting room. Later, when characters started to walk on in the middle of other characters’ intense dialogue, this technique merely became a distraction.

The stage itself, as seems to be the fashion for DST productions this year, was completely painted—the usually black stage was covered in white paint, over which grey lettering spelled out what appeared to be facts and statistics about AIDS. This was a brilliant idea, and created an abstract but relevant platform on which to perform. It would have been even better if the writing had been easier for audience members to read and learn from. The apron was lowered, which made it easier to suggest multiple locations, and overall the whole set was used smoothly and successfully. The only issue with the lowered apron was that, at times, actors at the front of the apron did not appear to be sufficiently lit. Another questionable lighting moment was when Emma (Charlotte Phipps) was addressing the Examining Doctor (Kishore Thiagarajan). A spotlight had been placed on her, presumably to add to the intensity of her speech, but it seemed slightly out of place, since the rest of the lighting had been fairly naturalistic. Additionally, Thiagarajan’s character was speaking in complete darkness, potentially a deliberate creative decision, but one which came across more like a lighting error.

Overall, The Normal Heart is an interesting and well-intentioned piece of theatre that is, on the whole, delivered competently and effectively. It brings an important piece of history to the forefront of discussion, and Fourth Wall have also agreed to donate a portion of ticket sales to an HIV and sexual health charity, which makes a visit to The Assembly Rooms Theatre this weekend even more worthwhile.