Ellie Farrell is impressed by this unconventional telling of a love story. 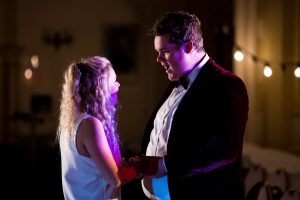 The Last Five Years is a raw, emotional chronicle detailing the highs, and extreme lows, of relationships. It is an honest telling of love and loss, and everything in between, following the lives of Cathy (Amy Porter), a struggling actress, and Jamie (Elliot Mather), a newly successful writer. It maps their five-year relationship, with Jamie starting at the beginning, naive and enriched with love and aspiration, and Cathy beginning at the end, detailing her heartbreak and despair. Manipulating time in this way presents a profound and dynamic contrast: the light and dark times in our lives, and how they often blur together. Presenting two extremes, and having the two timelines run alongside one another simultaneously, emphasised how much both Cathy and Jamie had gained and lost in the span of half a decade. 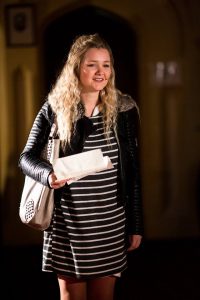 Set in Hill Bede’s converted chapel, it made for an intimate and immersive theatre performance, and the story was all the more resonant for it. Placed right at the centre, and in the middle of their two timelines, the audience felt as if we were bystanders to the drama, wishing to intervene and guide the two lovers back together, but ultimately unable to do anything to stop the division which forms between Cathy and Jamie. The length of the room seemed to depict a timeline with an ocean of space between the two leads; like two boats on the ocean, they passed in the current, but never quite met in the middle – never quite able to see eye to eye, and driven apart by Jamie’s aspirations and Cathy’s struggles. Segregated for almost the entirety of the performance, both characters only interacted when their timelines crossed one another’s: a moving scene depicting their first dance as a married couple centred this interaction, and only made it all the more saddening to see them part once more, grow slowly apart and then never to meet again.

Porter and Mather both delivered strong performances with impressive vocals. Porter’s Cathy was tragic, and it was poignant to see her regress back to her happier self. Mather’s Jamie was, perhaps, less sympathetic, with his character seemingly serving as the main saboteur of the relationship. Even with that said, Mather created a multi-faceted character: one who was bombastic and energetic when filled with hope, but quieter as he fell into despair as his marriage crumbled into disrepair.  Both leads portrayed love, anger and hopelessness effortlessly with accurate resonance and realism. 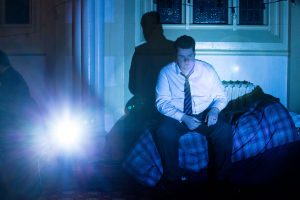 The music itself was a character of its own. Live, orchestral music accompanied the onstage action, building and growing with one character’s optimism and becoming quiet and understated with another character’s unhappiness. It filled the performance space, adding to the emotion presented onstage.

A recurring theme was that of time, and its progression, and the dialogue presented this theme subtly. A recurring lyric of Jamie’s, “I keep rolling on”, reflected how time often continues without us. Cathy also demonstrated this theme beautifully, with her character choosing to reflect on the good times, in contrast to Jamie, who continues to follow the path of the present, to keep pushing ahead, not look back, and keep rolling on.

An honest portrayal of relationships, showing how not everyone gets their happy ending, this production teaches the value of cherishing the fleeting moments of joy because ‘It’s alright, we have tonight’, but we might not have the next five years.