REVIEW: The Last Days of Troy

Grace English enjoys the epic aesthetic of DUCT’s ‘The Last Days of Troy’.

This term, Durham University Classical Theatre present Simon Armitage’s The Last Days of Troy, a rendition of the Iliad and subsequent events leading up to the capture of Troy. Overall, the performance was an imaginative and engaging one, which considered the demands of the text and made ample use of the resources available. 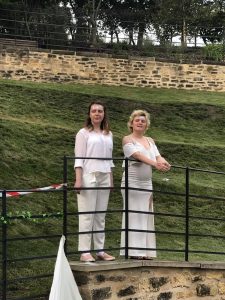 into the environment of the play itself, and it was clear that the director had considered how best to use this to the advantage of the show, making ample use of the space offered by working with the multiple levels offered by the location. The immersive nature of the set allowed for the amplification of Zeus’ role as a storyteller and a relic of a lost era, and the choice to present the show outdoors was appropriate to the battleground on which it is largely set. The set design itself was simple yet effective, consisting largely of sheets used as makeshift tents, and allowed for smooth scene transitions with little disruption. Overall, the use of the location and the design of the set helped render this an engaging performance.

The costuming was period-appropriate and clearly took into consideration the means by which it could be used to characterise the different factions of the play, as shown through the all-white regality of the gods versus the pink silks of the women of Troy and the simple, practical togas of the Greek and Trojan warriors. Furthermore, the face paint used to indicate the sides of major warriors was an inventive touch that amplified the atmosphere of warfare that occupies the crux of the play. The subtlety way of foreshadowing the twist of the play through Zeus’ jacket demonstrated the way in which the costuming and the way in which it could be used as a vehicle for the text had been carefully considered. It was clear throughout the play that the costuming, whilst simple, had been designed with a degree of skill and selectiveness.

It was clear that the entire cast was passionate about the story they wanted to convey, and as a result, everyone gave a strong and compelling performance. The cast worked extremely well as a unit, each clearly having considered the nuances of their 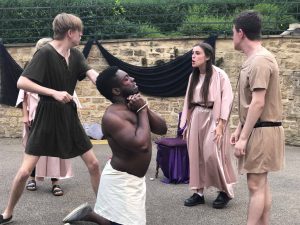 characters and how best to bring these nuances to the surface. In particular, Niamh Hanns as Andromache took a role written to be relatively one-dimensional – that of the grieving wife and jealous sister – and made it compelling and powerful in an impressive way. Issy Flowers also gave a standout performance as Hera, with a seamless and believable transition in personality once the twist of the play was revealed, and Ed Cook as Achilles was another memorable characterisation. Amy Porter’s Helen was one which brought to life the humanity that Armitage tried to give her, and was particularly moving through her singing a lament for the Greek army.

Overall, DUCT’s production of The Last Days of Troy was one which skilfully handled its source material and did an impressive job in bringing the text to life. The company had clearly worked hard on direction, costuming, and setting, and the actors all worked incredibly hard to bring their characters to life.

The Last Days of Troy will be playing in Wharton Park Amphitheatre at 6:30pm on Thursday 20th and Friday 21st June.