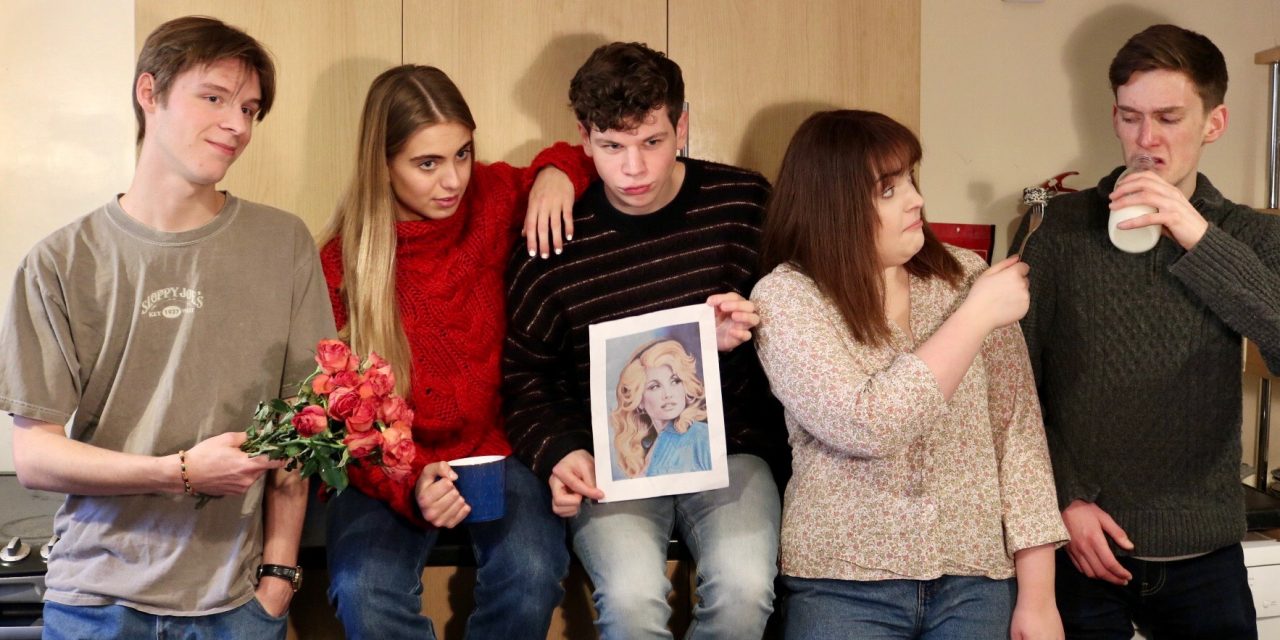 The Kitchen Sink by Tom Wells is, as the title would suggest, an example of kitchen-sink realism, detailing a year in the life of a normal family in Withernsea. The play gives meaning to the seemingly insignificant details of everyday life and explores the importance of dreaming, taking chances and family when living in what feels an inescapable bubble. Fourth Wall Theatre has certainly succeeded in portraying this.

As soon as the audience walks into Hatfield College’s Birley Room, through the door of the set itself, they are immersed into an ordinary family kitchen. The elaborate set is meticulously arranged, appearing as realistic and lifelike as a TV set, which helps the actors perform as naturally as possible. The producer (Kate Pesenti) and assistant producer (Lamesha Ruddock) must be praised for sourcing all the kitchen cupboards and cabinets, the sticky-noted fridge, without which the play would have failed to be so brilliantly grounded in everyday life.

Undoubtedly, each member of the cast is fantastic. They understand their characters’ motivations and ambitions, something that is often overlooked, but imperative to realist drama, helping them interact believably with one another. It is clear the cast have spent a lot of time working on getting this right. Minor mishaps (a wonky table, a fire alarm that wouldn’t screw on the wall and knives falling off counters) are taken in their stride, contributing to the authenticity of the play. The pace of the dialogue is appropriate throughout. The actors glide easily between moments of intensity and calm; the rise and fall of family life is captured perfectly. Also impressive is the clever use of silence in the play, which helps the audience digest the story being told but more importantly hint at subtler emotions felt by the family that Wells’ script could never illustrate.

Each actor must, however, be given an individual mention. Billy (Charlie Howe) is portrayed with great care, balancing the character’s passion and joy with moments of sheer self-doubt. Howe is successful in making him a truly sympathetic character. Similarly, Sophie (Antonia Hogan) becomes a character the audience learns to sympathise with as Hogan skilfully cracks open the character’s self-assured shell during moments of trauma, like when she describes her experience of casual sexism, portraying with sensitivity the damaging effects it has on her. Moreover, the endearing affection the lovable matriarch, Kath (Eleanor McIntyre), feels for her family shines through brilliantly in every tender scene, whilst Martin (Cameron Ashplant) complements her character with his disengaged attitude and slovenly posture. The two actors successfully break down the couple’s relationship during their arguments, then reassemble their feelings for one another by effectively adjusting their tone of voice and body language to suit the characters’ feelings. Yet, the audience’s favourite character is most definitely Pete (Tom Salter), whose emits a sense of awkward lovability in every action he performs, from fixing sinks to rolling joints. We feel his pain from the start.

Congratulations must therefore be extended to the director Mary Lord and assistant director Eloise Richmond, who have clearly spent hours ensuring the play masterfully blends comedy and tragedy in a modern setting, whilst at the same time not trying too hard to push the play in a unnatural direction.

Unfortunately, although a thrilling experience overall, a slight issue did arise regarding blocking that should be polished ready for the next performance. Sometimes actors faced away from the audience, which led to some scenes being less engaging. Furthermore, exits could have been better executed. Though seeing backstage as characters exited through the central door does contribute to the realist effect, sometimes the door was left open for too long, or not at all closed, after a character exited, which compromised the illusion slightly. Nevertheless, the door became an accidental, yet hilarious, motif during Thursday’s performance, since the actors really struggled to determine which way it opened, leading to instances of spontaneous comedy.

This adaptation of The Kitchen Sink is a charming piece of theatre, brimming with joy and laughter, that skilfully acknowledges the struggles of coping when the world around you changes faster than the four walls you’ve grown accustomed to.

The Kitchen Sink will continue in the Birley Room (Hatfield College) on 13th March at 7:30pm.