Review: The IT Crowd

Rowan Evans evaluates the success of Ooook! Productions’s transferral of this TV favourite from screen to stage. 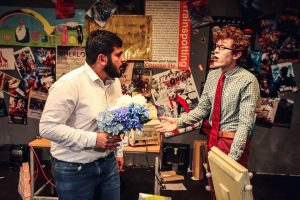 Three larger than life characters in a musky office, hunched over desks, and surrounded by rubbish. This is The IT Crowd you know and love, brought to stage for the first time by Ooook! Productions. In this venture they have adapted four episodes of the series in a way both faithful to the source material and fresh in its delivery.  You won’t be asking to turn this show off and on again…

The episodic structure translated well to stage – the breaks between each twenty minutes of laughing was much needed. The show was enjoyable from the start, but the cast really settled into their roles by the third episode – Moss lying about Jen being dead brought some of the biggest laughs. By the time of the fourth episode, however, the momentum died away, ending the show on a lukewarm note. 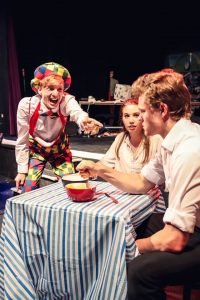 In some ways this came across as a lack of coherence. While the inclusion of Richmond the goth in this episode could have been a highlight, the direction left him as more of a footnote. Furthermore, comedic moments in this section were undermined by some of the technical choices. Jen’s yelling voice-over was not executed in time with her mouth moments, and the quality of the recording left much to be desired.

Despite this, the majority of the technical direction enhanced the rest of the production. The whimsical music over Moss talking about IT was perfect in portraying Jen’s cluelessness. This enhancement carried over into the set design, which was so effective that you could smell the hypothetical reek coming from the IT staff’s dwellings.

Moss, Roy and Jen were acted with the overblown eccentricities which the roles demanded. The chemistry between these three was on the ball from the start. The Nerdy Moss bouncing off the belligerent Roy, in turn bouncing off the prissy Jen. They were often accompanied by the loud Reynholm played by John Duffett, whose aggressive cluelessness dominated his hilarious scenes. Him yelling at a computer with his bellowing voice was a particular highlight.

The rest of the supporting cast played to their strengths populating weird world of Reynholm industries. Whether in the form of a flirtatious psychiatrist or vengeful security guard – they all brought the energy needed for a show that embraces the weird such as this.

Ooook! productions had a difficult task in translating a beloved sitcom for stage, but the IT crowd was a resounding success. While some slight hitches may have held up some areas of the performance, the engaging and energetic performances carried the night through.