Aadira Parakkat is drawn into the bizarre world of Alexander Cohen’s new play ‘The Human Flesh’, presented by Buttered Toast.

Alexander Cohen’s The Human Flesh is a dark and morally twisted play, with its witty dialogue and tense premise, succeeds in gripping its audience from the get go. The play, described as ‘not for the faint of heart’, takes pride in offending its audience’s moral sensibilities, yet somehow makes you start finding yourself align with certain characters; a feat of the excellent writing and convincing performances.

Immediately upon entering the Kingsgate venue, the room’s walls are lined with haphazard scraps of paper with messy sketches of body parts and interesting phrases such as ‘Eat Yourself’, and seats surround the centre stage area. Cohen cleverly uses the limited space he is given to his advantage by making the play immersive from the moment the audience enters and settles down. As the play begins, the relationship between Romm and Hanker is well established through their frustratingly cyclical conversation, and backed by powerful performances by Griffin Shelton and Jack de Deney who effortlessly spout quick-fire dialogue. Other notable performances include Aaron Rozanski as Clover, a pompous flesh connoisseur (because who knew cannibals could be pretentious?) and Eric Yu as Kez, who stuns the audience when the life drains from their eyes in a particularly tense moment of the play.

Technically speaking, the use of lighting to accelerate senses of anticipation in selective moments was noteworthy, as well as the effective blocking; a moment that comes to mind is the increasing chaos and rising volumes of discussion that debate the morality of eating a friend, while Kez contemplates their fate in stunned silence. Cohen portrays these contrasting temperaments on opposite ends of the stage space to compelling effect. Moreover, the use of nudity made the harsh realisation of Kez’s fate more jarring, essentially stripping their individuality of ‘consciousness’ to a piece of meat, a way to satisfy the bloodlust for ‘freshly made fresh flesh’. With its subtle hints at gender politics, Yu’s lifeless eyes and screams of struggles in this scene are distressing and hard to watch, and yet at this point in the play Cohen has his audience hooked and unwilling to miss what could happen next. During the course of these shocking events, the audience starts forming a connection with Romm and Hanker, as their vulnerable sides are revealed and they begin to confront their issues that were so starkly visible in the opening scene. A particularly ingenious moment was the full circle nature of dialogue that showed the reversed moral standpoints of the two characters. The confrontation of these issues, paired with the obnoxious arrogance of Rozanski’s portrayal of Clover make the ending all the more satisfying. 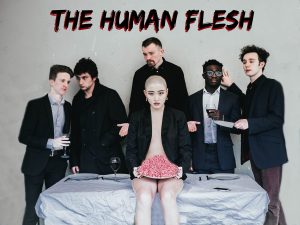 While the performances were excellent, the restricted space of the Kingsgate venue made certain transitions awkward and, in certain moments, distracting from the main events of the play. However, the audiences were kept on the edge of their seats throughout, and while the philosophy seemed overdone and unnatural at some places, there was no absence of action in the story and amusing bits of dialogue that gauged the audience’s attention. Overall, the play was incredibly well written and performed, and the adrenaline rush of increasing stakes paired with the moments of comic relief were an absolute treat.

The Human Flesh will be playing in the Kingsgate room in the DSU at 8pm on Sunday 5th May.