REVIEW: The House of Influenza

Natasha Ali is in hysterics at Durham alumni production ‘The House of Influenza’.

We live in a time where so much media has been created, we now have the ability to parody every story to no end. There’s tropes and stereotypes and story beats that are unquestionably linked to various genres and making fun of them can be hilarious. The House of Influenza tackles horror, and it tackles it well.

We follow an unnamed girl stuck in a zombie apocalypse. To try and cope with the impending sense of doom and expected depression she attempts to create the worst horror story ever made and from there we get a nice transition between the hysterically badly written fake movie and our increasingly more terrified protagonist struggling in the actual real horror of her current situation.

Fear loves company, which makes a one woman show the perfect choice for this style play. The set is non-existent, and our character is all in black, making for the most minimal design possible. It would have been nice to see some well thought out bedroom or living room stage just to give us more information about the person we’re following, but for the story told, a 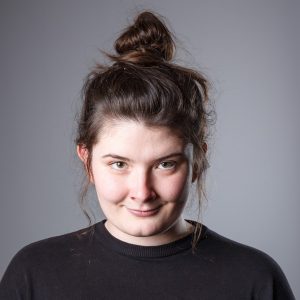 Lily Edwards is phenomenal in every role she ends up playing. Funny, witty and not afraid to interact with the audience, she creates distinct likeable stereotypes which work well off the emotional core of her real character. Watching Edwards easily cracking the audience up through ad lib and her way of delivering lines is honestly impressive as hell.

It’s clear Andrew Shire knows a thing or two about horror movies. For an hour-long play there are a ridiculous amount of references used and it’s clear this parody comes from a loving place for the genre. It’s also great to see the contrast of the emotional moments with the absolute bizarreness of the story the character is trying to tell. There are so many jokes thrown in there are points where you’re laughing constantly for minutes on end. Everything flows so well by the time it was over I felt like it had been ten minutes rather than an hour.

Despite the fact Edwards has to play multiple characters on stage, it never feels empty or like space isn’t being utilised. This is thanks to the direction of the play. There’s different levels, voices and accents between characters with our true protagonist centring it all with her narration. Different sub plots were put at different sides of the stage and Edwards sudden changes from character to character made it easy to see who and what was supposed to be where. I really can’t express just how funny this play was. It takes modern slang/terminology and flings it together with all the horror movie tropes you’d expect from a ‘so bad it’s good’ film of that genre.

There are few tiny criticisms of this production. The staging at the beginning involved a lot of random pacing that distracted me a bit from the story being told, and I wish that the lights didn’t turn completely off when we switch to the ‘real’ world – it means we can’t see Edwards face and it feels like we’re listening to an audiobook rather than watching a play.

Overall though, The House of Influenza is a brilliant, funny watch with clever references and fourth wall humour. If you enjoy anything vaguely zombie or Cabin-in-the-Woods related, I would highly recommend trekking up to Edinburgh later this year to see it.