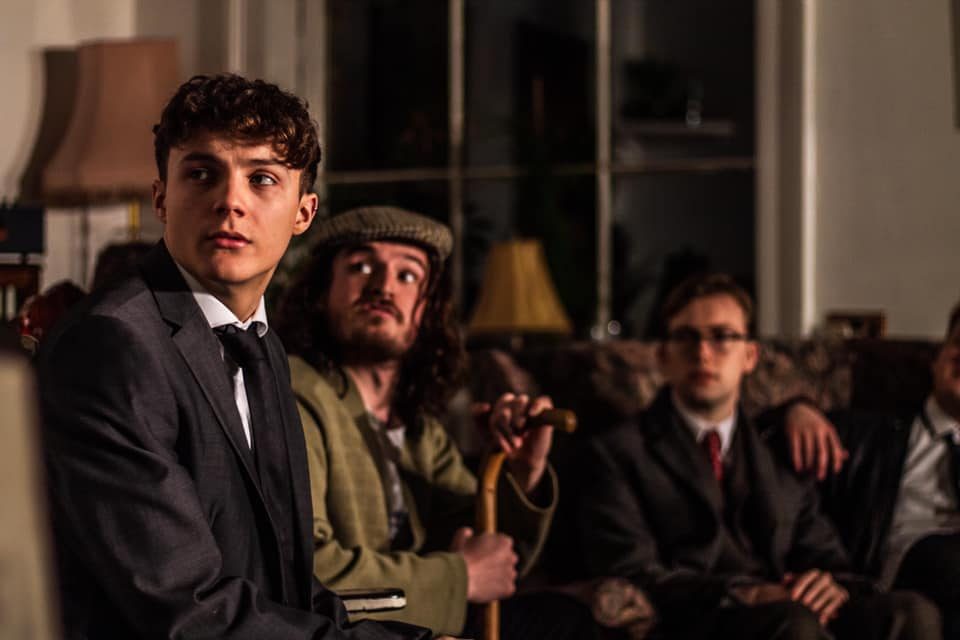 Issy Flower is impressed by First Theatre Company’s rendition of Pinter’s The Homecoming.

Harold Pinter’s early works were described as ‘comedies of menace’. Most productions since the premiere of The Homecoming have focused on the menace. George Sutton and Ben Smart’s decision to focus on the comedy has yielded surprising, uncomfortable, unfathomable but mostly succesful results.

The most striking element of this production was the performances. Not one could be faulted, even if at times the styles of each performer differed wildly. Auguste Voulton in particular stood out for his entirely convincing transformation into a lecherous old man, and his ability to move between comedy and drama whilst maintaining a clear sense of character, even as the play vascilated between farce and intense emotion. Similarly, the supporting comedic performances of Seb Wheble and Tom Pyle showed strong comic timing and sense of character, with both providing some of the biggest laughs of the night. However, whilst both Ben Willows and Nina Stevens showed strong instincts for creating subtle, tightly-coiled characters, whose interactions perfectly discomforted the audience in contrast to the comedy, these excellent performances occasionaly felt out of step in the group scenes with the similarly excellent but much more comedic performances of the rest of the cast, at time feeling a bit jarring and dulling both the comic and tragic elements of the play. Whilst more could have been done to ease the transition, no performance fell flat and they were all consistently well characterised, acted and entertaining.

Particular praise must be given to Sutton and Smart for stepping into the role of Lenny at the last minute. This as much as anything demonstrated both directors’ strong understanding of the play and acting ability, as both pulled off similar but individual performances that conveyed Lenny’s sense of menace and intellectual playfulness as he half-masterminded, half-analysed the disintegration of the family dynamic.

However, the choice to focus on the comedic elements at the expense of the dramatic at times impacted moments in the play that needed full dramatic weight behind them, particularly in the second half. Whilst the inner comedy of dull lines was frequently unleashed (a discussion on cuddles and another on cheese being highlights), others become laughable for the wrong reasons, such as physical scuffles between the actors. This can be attributed to the difficulties of Cafedral as a venue, which whilst creating fantastic intimacy that really allowed the performances to shine allowed the actors very little room for manouever, making the play more static than other venues would have allowed for. Despite this, the intimate atmosphere and sixties-stylings of the set created a wonderful sense of place that strengthened the production and helped keep the audience keenly involved in the drama even when some comedic moments threatened to pull them out of it.

Overall, this ‘comedy of menace’ was a fantastic way to end the term. Despite some tonal inconsistencies and the limits of its venue, the directorial vision allowed Pinter’s undervalued comedic elements to shine whilst maintaining its menacing discussion of family dynamics and sexual relations, aided by one of the strongest ensemble performances this year. Break out of quarantine to see this play!

The Homecoming will continue at Cafedral on 15th March.