Anna Marshall takes a night off from revision to see CTC’s revival of Alan Bennett’s classic. 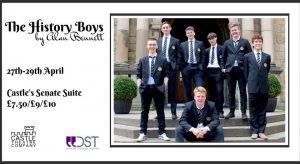 Alan Bennett’s well-established play has been joyfully revived for one weekend only by Castle Theatre Company; a perfectly-timed criticism of exams and pretentious learning of ‘gobbits’. The History Boys follows a class of boys in the 1980s as they are guided through their Oxbridge application process, and inevitably risk “letting their degree get in the way of their education”, as Bill Bryson has warned us all against. Enter into Bennet’s world of witty repartee, eloquent speech and academic thirst combined with a good helping of homoeroticism, in what is ultimately the 21st century’s most Oscar Wilde-ian coming of age story. The energetic cast performed in the quaint Senate Suite, Castle College, which served as the perfect classroom setting for this simply staged production, completed by a smooth lighting and a soundtrack for scene transitions.

This is a play which fast earned itself, ironically, a place on GCSE syllabuses and was adapted into a popular film. But with its wry references to Durham, exams and student theatre, director Anna Haines’ production use excellent comic timing to create a really worthwhile performance. As a class of cocky, hyper-intelligent schoolboys, Castle Theatre Company have perfected their nostalgic creation of a restless classroom, with each character contributing and performing uniquely in a way one could only hope would happen in a Durham University seminar. The endless tirade of one-liners and rapid fire humour is handled expertly by this cast, who, aside from a few knocked over props, never so much as cracked a smile that wasn’t entirely fitting with their character. Collective sighs, seamlessly natural interruptions, and boundless energy combine to present the classmates as a unified core, whose emotions rise and fall in immediate synchrony and utter dedication from each actor.

Alexander Marshall as Posner is an eager, enquiring, weedy, and mildly pathetic class geek, whose real talent is demonstrated in quiet moments of paused frustration, but also shines through in his singing and tentative confrontations. Commendation is due for the sketch of a brothel/battlescene performed entirely in French, with infectious zest, creating one of many hilarious moments. This is a cast which seems to have gelled despite the time of year, with fast patter allowing the play’s banter to fly. Ralph Skan as the down-to-earth Scripps is a perfect foil to Ewan South, a perfectly-cast swaggering Dakin who manages to create nail-biting chemistry with Max Lindon, who plays Irwin, the teacher. All the teachers manage to achieve the authority with a slice of pretension and theatricality from which the pupils can bounce right back off. As headmaster, Jake Hathaway is infuriatingly scheming and represents the oppressive voice of authority perfectly.

The energy of this production stands out and is perhaps the source of some minor detractions, with noisy scene changes and Lindon’s lively performances including leg stretches during his time in a wheelchair, which was mildly unbelievable. Indeed, if flawed, it was only in the bubbly cast making more elderly characters less genuine: although wonderfully-appropriate costume choices settled this well, with school uniforms and Talor Hanson’s 1980s outfit, which helped her excel in this male-dominated play as a sassy matriarch. Not to be overlooked is Owen Sparkes, as Hector. Sparkes has reinvented this role afresh, perhaps being the font of the cast’s spirit, with naturally flowing academic chatter, portraying an inspiringly passionate but bittersweet character with a nervous desire to prepare his boys for life. In each expression, contortion of the tongue and lick of the lips, the audience was drawn to the complex Hector and considered the ideas he espouses. My only wish would be for a more ideologically-driven approach to theatre from the production team: why is The History Boys an important play to continue? A fresh and more relevant interpretation would have propelled this play beyond relying on the awesome power of Bennett’s words, into creating something more meaningful than just being well-performed acting.

The History Boys will be playing in The Senate Suite, University College at 7:30pm on the 28th and 29th April.