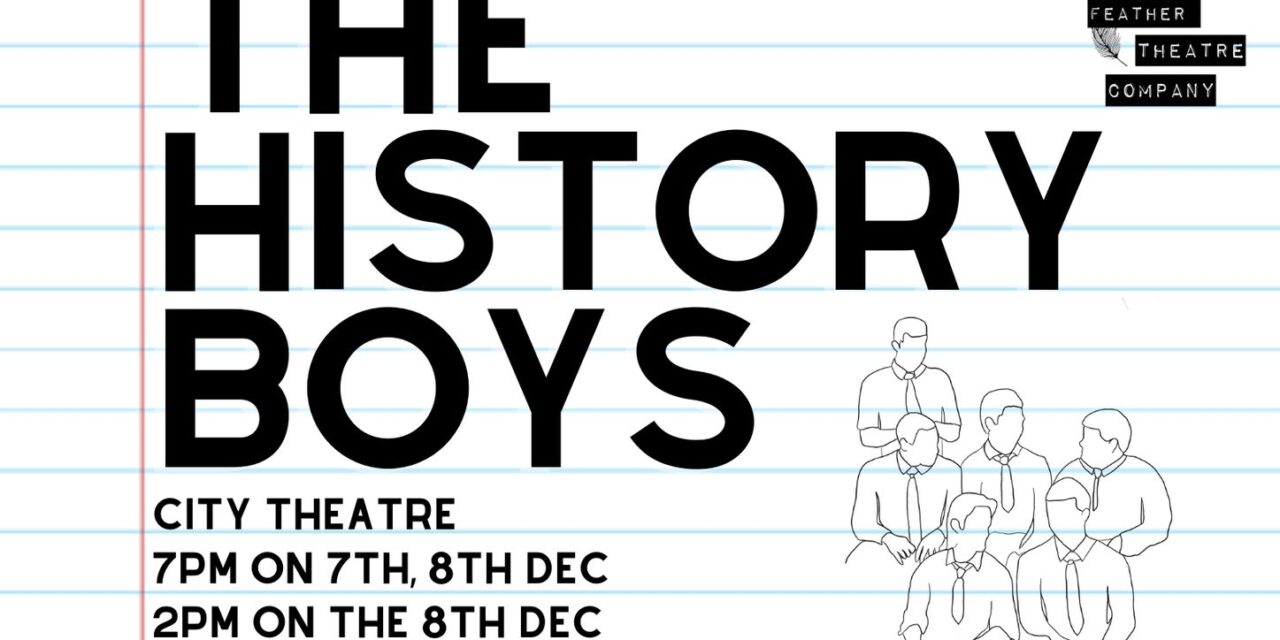 Feather Theatre Company present an incredibly strong cast in their production of Alan Bennett’s ‘The History Boys’ at The City Theatre. In any scene involving the boys themselves, Ben Smart’s Dakin consistently pulled focus, as the character rightly should, most likely helped by the incessantly arrogant gum-chewing- a character choice from Smart which really worked. He also achieved Dakin’s boyish-charm alarmingly well, with some of the most naturalistic delivery I’ve seen on a DST stage: particularly in his pacing. I do wonder, however, whether there was much originality to his interpretation of the character – of no relevance of course to the strength of his performance and his ability to completely control the audience response with just a glance. However, Smart must be careful not to become reliant on this response – towards the final scenes it felt as though he was trying for laughs more than he was trying to achieve the character’s intentions.

Some of the best acting moments of the show came between Smart and Anton Blaubach’s Scripps; Blaubach bringing an understated, subtle sophistication in his acting style – a perfect Scripps. Similarly, Stephen Ledger made a striking Posner and was perhaps the strongest actor all-round – especially given the journey experienced by his character. Ledger could build and break tension expertly, and never pushed too hard. His singing had an unearthly quality which was incredibly moving – extremely well-cast. I refuse to believe that Alex Comaish’s Timms required any acting whatsoever, and that he wasn’t exactly like his character throughout. In true class-clown fashion, he acted up for the audience as much as his co-stars, though I would have liked him to keep his focus within the scene more often. The strongest background acting came from George Thomas as Rudge and Krishna’s Akthar – they really listened to the other characters, their reactions never too big.

Ben Willows made a wonderfully eccentric Hector, and managed to make the audience sympathise with an incredibly flawed character. His monologue on compound adjectives was completely captivating, managing to keep audience focus on every word with his quiet stillness. Irwin, played by Oscar Nicholson, achieved a very difficult balance within his portrayal of such a pathological liar, giving just enough for the audience to doubt him while retaining a likability. Like Ledger, he was perfectly cast for the role, both in capability and look. A final mention must go to Marc Twinn’s Headteacher: completely believable and the star of the supporting cast. I would add that he could engage the rest of his body more in his performance – he often heavily relies on voice and facial expression.

The direction from Luke Blackstock, assisted by Lali Rhydderch, while brilliant in some moments, lacked sophistication in others. There seemed little thought given to where the boys were placed both in the room and relationally to each other (aside from keeping Smart central, which he wasn’t always) – in particular, why Timms was in the front row. This is not only ill-fitting with his character but also diminishes the importance of Scripps who is instead hidden behind. Regardless, Blackstock did triumph in his direction of tension – the space between characters was used to stretch the tension across the stage.

However, the bell sound effect was off-putting, not only was it often timed a fraction too late, but the artificiality threw the audience straight out of the story and back into the reality of sitting in a small dark room watching Ben Smart in his underwear. Conversely, the simple costuming and subtle differences in the way each boy wore the same uniform was perfect: Timms’ untucked shirt, Posner’s blazer buttoned and satchel worn across the body, and Dakin’s top button undone. Similarly, I have never seen a more perfect costume than that of Mimi Nation-Dixon’s Mrs Lintott, except perhaps for the dazel caused by the stage lights hitting her earrings (a minor distraction against a very strong all-round performance).

But none of this takes away from the incredible acting moments which lit up The City’s Theatre intimate space. Overall, Feather presented an incredibly strong production – ultimately held up by their impeccable cast.