Review: The Good, the Bad and the Durham Revue 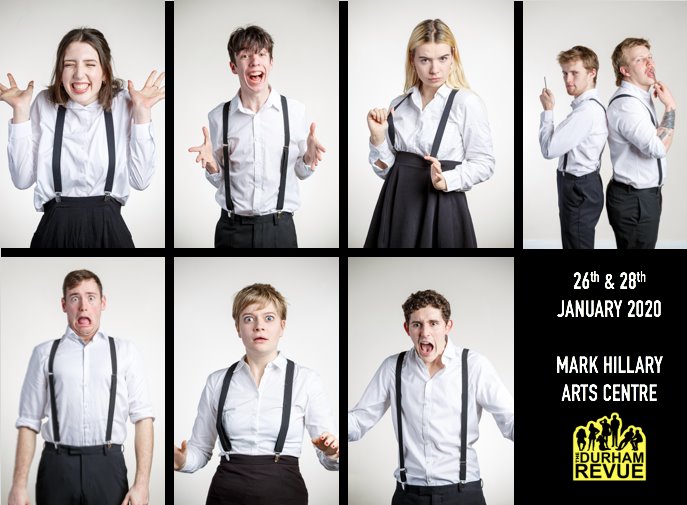 Isabella Thompson enjoys an evening of fast-paced sketch comedy with the 2020 Durham Revue’s debut show, The Good, the Bad and the Durham Revue.

Set in Nevada, the 2020 Durham Revue’s first show, The Good, The Bad and The Durham Revue, begins with the troupe being on the search for “comedy gold” in true Western style, and the audience is treated to an array of sketches from a ‘holy grail’ script supposedly dug up from the desert. As well as fresh material, this production debuts new members Charlie Nicholson and Daisy Hargreaves, who, having an incredibly high reputation to live up to, keep true to the group’s quirky style. In short, the Durham Revue does not disappoint with its characteristically fast paced and incredibly witty performance.

The concept of a gold hunt is clever and allows for sketch variety whilst maintaining a consistent narrative that helps the audience get on board as soon as the show begins. The slightly corny pun of the Revue’s content being “comedy gold” warms up the audience well, along with the visual gag of gold glittery cowboy hats. The setting of Collingwood  College’s Mark Hillery Arts Centre stage works well, allowing for clear exits and entrances and funky lighting reminiscent of a cheesy school disco. The slick transitions in between the sketches, set to music that matches the content of each maintains an impressive momentum throughout the performance, and really keeps the audience’s interest. A brilliant example of this is when ‘Hips Don’t Lie’ plays after a sketch about Shakira.

On that note, Ben Lycett and George Tarling must be commended for their genius and unique writing style alongside the rest of the troupe. The varied lengths of sketches keep the audience on their toes, but it is the eccentric subject matters that really give the show its edge. With a mix of self-referential and abstract comedy, set ups for punchlines are consistently clear and well thought out. My personal favourites include a motif where Bob Howat graces the stage with “the key to the city” (a “very big key”) and, with the support of his fellow city-folk, can do as he pleases. Though I felt some of the sketches could have been shortened, as potentially strong punchlines are weakened by their length, the diversity of the subject matters and constant mini-plot twists are received well by the audience. The chemistry between the performers is evident but inevitably has room to grow in comparison to the 2019 troupe. Despite this, Lily Britton seemed the most at ease with her fellow cast-mates, which allowed for a wonderfully relaxed and sarcastic style.

All in all, The Good, The Bad and The Durham Revue is clearly a continuation of the Durham Revue’s renowned success. It’s clear that an immense amount of work has gone into the making of this production, and yet the cast performed with an organic sense of spontaneity and energy which never felt laboured. An easy one to watch again, this show is a must-see for anyone who wants to escape from taking life too seriously. No pity-laughs required, you’ll definitely want to get up there and join the Durham Revue on their hunt for “comedy gold”.

The Good, the Bad and the Durham Revue will play at the Mark Hillery Arts Centre, Collingwood College, on 28th January at 8pm.