Ooook! Productions brings us a hilarious revival of Larry Shue’s The Foreigner at the Assembly Rooms Theatre. With an eclectic range of characters, this production displayed the dire, yet comedic, consequences of pretending to be someone you’re not.

As the subtle soundtrack of Johnny Cash’s ‘Jackson’ played upon arrival, and

Reagan’s portrait greeted us smiling from the stage, we were transported to 1980s Southern America. The impressive set boasted a crackling fire as a centrepiece; as we stepped into Betty’s (Zoe Lawton) living room lodge, we noticed the welcoming sofa and central area, where a lot of the drama later unfolded. The nature of Froggy’s (David Fairbairn) and Charlie’s (Dan Hodgkinson) relationship was neatly portrayed by both actors, as we saw Charlie’s character evolve and step out of Froggy’s shadow, and into the deserved limelight. David’s portrayal of Froggy had great comedic timing, bringing to life the confident attitude of the ‘laddish’ army man. David’s upbeat performance was nicely matched with Zoe Lawton’s vivacious portrayal of Betty. With Zoe absolutely nailing that southern twang, you couldn’t stop yourself from falling in love with this generous, yet gullible, character. It was clear from Zoe’s stage presence that she was more comfortable on the stage than those (rather short!) shorts were on David Fairbairn.

If Uday Duggal’s uncanny interpretation of Owen Musser, the local white supremacist who believes in the liberation of the white Christian man and the disposal of ‘foreigners’, doesn’t draw about a comedic, yet terrifying, parallel of the America we see today, I don’t know what will.

Subtle nuances within the plot were really explored, and brought out through the naivety and nervousness that goes along with Charlie’s character, as Hodgkinson used it for his own comedic advantage. As an outsider, Charlie is placed into a privileged position where he is revealed the true nature of everyone’s personality. Often burdened with everyone else’s problems, and being caught in a sticky situation, or two, Hodgkinson’s physicality of Charlie brought about the hilarity of morbid and tense situations. The relationship between Charlie and Ellard (Marcus Dell), is crucial, as both characters are vital instruments in encouraging the other to come out of their shells. Marcus played the role of the family ‘black sheep’ well, with his ludicrously dim lines gaining him many a laugh from the audience – although his sweet nature called for them to be laughing with, and not at him.

With the trap door being the unspoken 8th character in this play, I must credit the technical team, and its technical directors Ruth McTiernan, and ZuNing Tay. The trap door allowed for us to be immersed into the many dimensions of the world we saw unfolding, as well as being a key part of saving it. The atmospheric lightning and thunder present from the beginning set the audience up for the ominous events that unfolded between the local Ku Klux Klan members and the Lodge’s out-of-town visitor, Charlie. 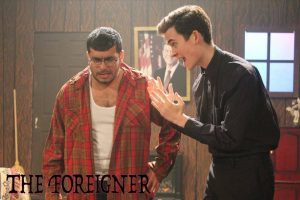 Directors Anna Haines and Talor Hanson, take on a classic comedic piece from the 1980’s, and do what DST does best, make it theirs. With their artistic interpretation, they emphasised the importance of human interaction through shenanigans and harmless fun: how the art of listening to one another can truly open your eyes to a different way of experiencing day-to-day mundane things. So, whether you gain from this the urge to place your glass on your head after breakfast, or simply just to help those around you by listening and learning, you’ll take something away.

A thoroughly enjoyable production, The Foreigner should leave you with the curiousness of what Ooook! Productions shall grace us with next.

The Foreigner will be playing in The Assembly Rooms Theatre on the 1st and 2nd December at 7:30pm, with an additional matinee performance on the Saturday at 2:30pm.