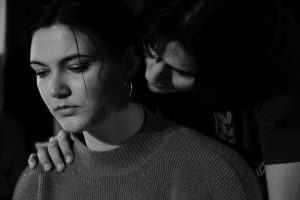 Ultimately, The Events by Davud Grieg is a play about community. Grieg’s story of the aftermath of a shooting spans the comprehensive scope of human emotion. Directed by Alice Chambers, Athena Tzallas and Kishore Thiagarajan-Walker star in Cuth’s Drama Society’s modern exploration of learning to forgive evil. As Claire the vicar, Tzallas’ character questions the God who would allow such atrocities to occur, demonstrating the flawed grief in responding to tragedy.

Performed in the intimate Alington House Community Centre – a fitting venue if ever there was one – this piece commences and concludes with a community choir (CDS have collaborated with Music Durham for this element) – a small but powerful troupe of authentic voices central to the overall dramatic accomplishment. Director Alice Chambers has bravely tackled Grieg’s Greek chorus style, with Shannon Moxey and Char Penston enhancing this to create seamless transitions, spontaneous playings of Dizzee Rascal and clear lighting changes between Claire’s present, past and inner mind. Although the chorus are fittingly ‘normal’, perhaps closer attention to costumes could have been paid, to create an impression of a more diverse choir than just students. 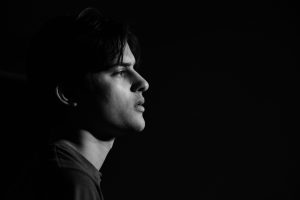 This play has created an insight into the workings of a parish community: Tzallas showed understanding and patience as her character sought multicultural collaboration in divided Britain, then beautifully displayed the true testing of her identity as she questioned her faith. Stark lighting and passionate monologues allowed this storyline to unravel slowly, as Thiagarajan-Walker multi-roled to fill in the gaps between this vicar, the choir she leads, and the life that crumbles, as she obsesses over a murderer. Thiagarajan-Walker is energetic and flamboyant, breaking the fourth wall and increasing the tension of this piece with effortless control. He flicked between murderer, father, psychologist, teenager and girlfriend to make this complex plotline understandable. However, had there been greater distinction in his characterisation of each of these roles, the audience could perhaps have been drawn in further, although any actor would struggle to perform his miscellaneous roles with enough diversity. As The Boy, one wishes Walker had been able to play a more convincing working class delinquent-gone-killer, instead of reverting to caricature psychopathic tendencies. This became confusing when Walker played the vicar’s partner, as he maintained his masculine mannerisms and changed accents inconsistently.

Chambers has devised some outstanding sequences, creating moments of extreme fear, but also moments of beauty, both of which were frequently tear-inducing. Tzallas displayed her character’s changing states with conviction, creating credible tears spontaneously and shocking her audience from the beginning with her bold posture and command of the stage. Cuth’s Drama Society have created a bold and unique element to this year’s Durham Student Theatre. Well done to the chorus, and their musical director Sarah Murrison, who really cemented the brilliance of this play, to the outstanding Athena Tzallas, and to the impressive Kishore Thiagarajan-Walker. This play is a concise rollercoaster which initially requires concentration, but ultimately leaves one feeling uplifted and inspired.

The Events will be playing on the 18th and 20th January at 7:30pm at Alington House.