Anna Marshall enjoys the last ever performance of the Durham Revue’s 2016-17 troupe. 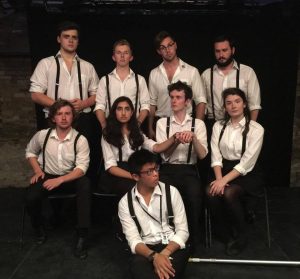 Last night The Durham Revue returned to the Assembly Rooms Theatre for their last ever performance of Laugh Actually, after their annual tour to the Edinburgh Fringe in the summer. From start to end, this is a company that bursts with vitality and humour, to create a sketch show of the highest quality that propels itself at full lustre. Of the eight players in this show, no performer was comparable to another in style, each drawing on different traits and niches to create a stomping success. With a pulsing soundtrack creating a buoyant energy to allow rapid transitions, this hour of merriment never let a gag go stale and left the audience hooting with tears by the conclusion. Each sketch took us in another direction, diving into scenarios such as dressing up your child as colonialism for Halloween, ladies’ bathroom talk, and asking deep questions such as: ‘why perfume adverts never simply describe what it smells like’.

The moments of pure joy came from this group’s fantastic cooperation as a single unit: flicking into choir, or dance troupe, at the drop of a hat. Their electrifying dynamism only gained momentum into the next fresh sketch. At the heart of this is a core of clear talent and meticulous rehearsal. These actors know how to work an audience to their limit: Ambika Mod kicks off with a dry gaze into the audience that dares us not to laugh, creating ceaseless appeal from her punchy attitude and timing; Luke Maskell’s confidence teases warmth with his saucy deliverance, which commanded audience attention, and was complimented assertively by Broccan Tyzack-Carlin’s knowing rapport. Andrew Shires certainly was a highlight in his poker-face performance of ‘The Titanic: From the iceberg’s perspective’, as well as the histrionic audience member who becomes overexcited at the thought of improvisation. Lily Edwards settled the audience into good humour early on, lightbulb-like in her ability to switch from one caricature to another, and Tom Harper’s daring streak was just one of the many fantastic moments this show displayed. Their range of skills means that it is almost impossible to distinguish or raise one performer above another. Had I been able to stop crying with laughter for the final twenty minutes of the play, perhaps I could have also appreciated fully their skilful diversion of the only criticisms one could lobby at the cast: although six out of the eight were white males, the sketch displaying typical male scripting of a girls’ conversation introduced self-deprecating irony to circumvent any sticky point. Supporting these actors was a perfectly synced soundtrack, with live dubbing smoothly making “lad chat” acceptable. Although the set was kept simple, the lighting enabled fluidity but maintained the action as each scene rapidly changed.

Even without the free sweets, this would have been a tremendous show, and I am left only with gratitude that my first Durham theatre trip was of such a high calibre. Having expected awkward gags, long silences with forced laughter and outdated references, this show absolutely proved me wrong – I can just about remember S Club 7 enough to appreciate their rendition. My only complaint could be that not more people were able to experience what must have been a fantastic run, due to the tickets quickly selling out. Huge congratulations are certainly due to Mod for pulling off a directorial triumph in light comedy, and to the entire Durham Revue for lightening fresh writing. All we can hope is that the new academic year’s intake will continue the high standard we now expect from the Durham Revue.