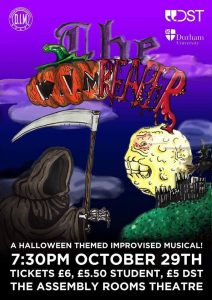 Walking into a production by Durham Improvised Musical (DIM) is always a provoking experience. The audience enters feeling in equal parts excited and apprehensive, sharing the presumed nerves of the cast at the prospect of an hour of off-the-cuff action. . The formula is simple, yet effective: the cast choose a location, a song title, and a production name from the audience’s suggestions and transform it into a raucous improvised musical comedy.

The spin this time was a Halloween theme, as indicated by the punny promotional title ‘The DIM-Reaper’. The audience were particularly ripe with suggestions and it was decided that the musical ‘The Vampirate’ would be set in a ‘spooky graveyard’ and would feature the song ‘Stop Biting Me’. The action commenced immediately, with Rhys Rodrigues conducting the scene through a spooky jingle on the keyboard. Straight away, Lily Ratnavel and Barney Mercer stood out amongst the cast for their commitment to establishing the graveyard setting with weird and wonderful physicality, which they both maintained effectively throughout. Mercer was loyal to his character of ‘The Ghost of Solitude’ from the very outset, and consistently sparked giggles with his physical theatricality. Similarly, Ratnavel shone on stage, with a consistent awareness of the details of the show, and some inventive comic asides which never failed to rouse the audience’s laughter. Sam Baumal (DIM President) was adept at driving the action on stage, and cleverly used his experience to instigate some intriguing scenes which resulted in some enjoyable on stage interactions. Florence Russell was one of the bravest amongst the troupe, enthusiastically portraying an Eponine-esque counter-lead to Ratnavel’s vibrantly deadpan romantic heroine, whilst showcasing a spectacular vocal range and musical awareness. Meanwhile, Danny Booth and Rosie Dart triumphed through their respective portrayals of the eponymous Vampirate and his trusty sidekick. Indeed, a favourite moment in the musical, and the crux of the action, was devised by this duo through a very impressive fast-paced lyrical conversation, which culminated in an eruption of laughter and applause from the audience.

Unfortunately, cataloguing the individual successes of the cast members is the best I can do in terms of conveying what actually happened onstage, as the plot did not take form due to the reluctance of several of the cast members to jump in and drive the action forward. This led to an irrelevant fixation on Mercer’s corduroy trousers which, though initially funny, became laborious. One of the great advantages of DIM’s medium is being able to throw the cast members in the proverbial, and it would have been fantastic to have seen the clearly talented new members make the most of their abilities in this way. Another minor criticism would be of the tendency to fall back on stock ‘tricks’, which shattered the spontaneity aspect upon which the company depends. For example, Booth resorted to his undoubtedly fantastic piano playing skills in a musical joust with Rodrigues. Though this was impressive in purely musical terms, it was not conducive to the formation of the show. A brief cautionary note must also be made about ‘corpsing’ (laughing on stage in an out of character manner), which equally served to prohibit the submersion of the audience into the improvised ‘spooky’ universe.

Despite this, the production was successful and a pleasure to watch. The minimal tech and plain black uniform was a brilliant decision as it forced the cast to rely purely on their own innovation. Furthermore, the diverse vocal abilities of the individuals came together very effectively through some instinctively created harmonies, which would have been outstanding if they were developed further. The coming productions will only get better and better as each of the cast members grows in confidence, which I am sure they will in the light of a brilliant performance which showcased a very high level of talent.