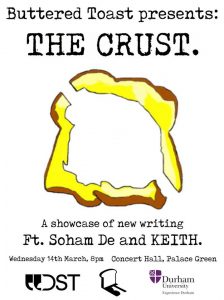 Buttered Toast’s The Crust was very entertaining and varied. Opening the show with an informal introduction created a very comfortable atmosphere, and allowed the audience to be open minded about the showcase of new student performances. Complete with student writing, original music and sketch comedy it was a true depiction of the range of student talent here at Durham.

‘The Amazon Take Over’ by Joe Norris was an interesting depiction of the scary advances of the technological world, and two men’s reactions to it. It started off very slowly, where the awkward glances to the audience and physical comedy while setting up the stage made it unclear if the piece had begun. Once it started the premise was fairly clear; Felicity Challinor did a good job of presenting the news articles, although some jokes were lost in her delivery. Similarly, towards the beginning of the piece both Auguste Voulton and Alex Griffin had some timing issues leading some jokes to fall flat. That said, as they both settled into the performance the pace was picked up and they shared some nice levels of physical comedy.

Fraser Logue’s ‘Eric’s Night Off’ and ‘Men Set Apart’ proceeded this. The first piece focused on a eunuch’s relationships between his upper-class employer and his potential girlfriend. All the actors had a huge amount of energy from the start which made the story increasingly intriguing and allowed some jokes to land successfully. There was very good chemistry between all the actors, and Lottie Dick shone in her physical comedy with Danny Booth. Similarly, Booth’s side glances to the audience and awkward facial expressions were a particular highlight. Despite this, there was an odd sense of narrative, where the scenes didn’t allow for relationships to flourish and often ended slightly too abruptly, leaving the audience a little confused. Perhaps it would work better as a full-length play with more time to explore the story.

‘Men Set Apart’ was an interesting take on a dystopian world where people can be ‘dead to the sovereign’ and therefore dead to everyone in their society.  This piece had a similar issue with narrative where I didn’t hugely follow the story it was trying to get across, and Dillon Blevins’ emotional rant seemed out of place. However, Fi Monk’s physical comedy and loud rehearsed vocals really emphasised the brainwashing and dystopian world it was trying to present. Similarly, Charles Pipe successfully created comedy out of the ‘sovereign’ character – his awkward entrance and bubbly likability contrasted well to his dictatorial role.

‘Minefield’ by Hamza Adam Rafique was my favourite dramatic piece of the evening. It was a very well-written extract which balanced comedy and more nuanced, poignant moments wonderfully. It centred around a young man’s musings on sex, relationships and mental health. Despite dealing with some difficult issues it was written and performed, by Andrew Cowburn, in a very understated and realistic way. Cowburn had very good comic timing, and his sweet timidity made him likable despite his somewhat questionable ideas. His sadder moments of self-reflection were unassuming and genuine in his performance. My one critique was that perhaps the beginning was too slow, meaning a few jokes were lost and the energy lagged slightly.

The final act of this half was Danny Booth’s comedy songs, and this really stole the show for me. His Tim Minchin-esque style worked incredibly well and displayed his talent as a comedian and musician. He managed to have a varied style of comedy within his set. He created songs which were witty and topical, and some that were character driven. Each seemed to work just as well as the last. He was a very charismatic performer and seemed to enjoy himself, as did the audience. His comedic talent particularly shone through in his side glances and off-the-cuff remarks which could be amped up once he learns his lyrics. That said, his reading off a laptop didn’t really detract from the performance and I hugely enjoyed it.

‘Curling’ by Alex Griffin started off the second half well. It was an immediately relatable and funny premise of two people watching the curling without much idea of how it worked. Mary Lord and Auguste Voulton had good chemistry on stage, and their comedic styles complemented each other well. Lord’s funny facial expressions and quick wit nicely balanced with Voulton’s more physical comedy. Both should be careful of speaking too quietly, especially when the background noises of the curling made it harder to hear. Similarly, the silences as they ‘watched’ were funny in part, though they occasionally dragged and lowered the energy of the piece.

Sophie Wright’s Pulse Point was next; it had an intriguing premise about two frustrated girls, one of whom turns out to be a cannibal. Although bizarre, it showed promise as a wider play, although I feel like this extract came across as a little confusing. Iz McGrady’s comic timing worked well against Jenny Shpeter’s initial frustration, but the turning point towards cannibalism seemed a little lost. Perhaps if the creepy and demonic nature of McGrady’s character was increased it would have seemed less out of place.

KEITH. sketch group were the penultimate act to the evening, and their wry and awkward humour was charming, and mostly well executed (we will excuse some technical issues). The troupe worked very well together: their relaxed and experimental style was really enjoyable to watch. The idea of having them all on stage also gave an increased energy to the sketches they were doing, even though the laughter at the side was occasionally distracting. Victoria Bull had particularly good and varied comedic talent displayed in her ‘soup’ sketch, which left the audience in tears. Similarly, Barney Mercer was very charismatic on stage and gave some varied performances. It would be interesting to challenge them to write more sketches out of the comfort zone of ‘awkward comedy’ to vary their set list, and show of the diverse talent they have.

The final act was singer-songwriter Soham De. Knowing very little about music I found it very hard to critique his performance as I was thoroughly engrossed and enjoying myself throughout. He is clearly a very talented and captivating musician, with a beautifully calming voice. I was particularly impressed by how emotional his songs were and the acoustic guitar complemented his voice nicely. It was a genuinely charming way to end a night of student entertainment.