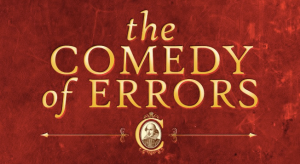 Having trekked through the snow to St. Mary’s College to watch Foot of the Hill’s production of one of Shakespeare’s earliest plays, The Comedy of Errors, it was clear that the production was a labour of love. Although the play failed in places to convince, it was clearly a very enjoyable experience for both the cast and the audience, and the production team should be commended for developing an entertaining evening of farcical Shakespearean theatre.

The set did a good job to set the scene and allow the audience to immediately appreciate the context of the play; signs outlined the tensions of the story and managed to take us to Ephesus, for which the directors should be proud. The lighting was effectively used to emphasise different scenes, and the music chosen was light and jolly – a good choice for encouraging the comedic attributes of the production. Unfortunately, however, the use of Mary’s College dining hall for this play left quite a bit to be desired; the temporary staging that was employed was noisy, and coupled with the difficult acoustics of the room, many lines were lost by the actors.

The directors did a good job of setting up the farcical characters that the actors had to depict, and characterisation, although not always hitting the mark, was developed well enough to create the cavalcade of nonsense that the play required. Unfortunately, it often felt like people were just reading the lines off a script, rather than truly emoting with the characters they were portraying, and there were a couple of closely-saved line drops. Given the acoustic difficulties of the room, diction needed to be much clearer, and some actors should bear in mind that shouting is just as difficult to hear as whispering when rolling through the lines too fast.

There were some great performances. Keir Mulcahey did an excellent job of meeting the farcical qualities of his character and commanded the stage. Lily Kattenhorn-Black had some nice moments of performance, and I appreciated the nuanced depiction of her character. Francesca Chaplin, too, showed some shining moments of honesty, and Auguste Voulton matched the intensity and energy that his character demanded.

Overall, my main issue with the play was that of the script itself. Far be it from me to ‘bash the Bard’, and there were good moments in the production, but I do not think this play represents the best that Shakespeare has to offer. It is fun, however, and the directors Sophie Boddington and Sophia Rahim should be proud of how they put The Comedy of Errors on its feet.

The Comedy of Errors will be playing in St. Mary’s College Dining Hall on the 4th March at 8pm.