opening Geoffrey Chaucer’s fourteenth-century play The Canterbury Tales. On the ten-metre-wide, six-metre-high and eleven-metre deep Gala Theatre stage. In Middle English. With a cast of thirty-one. Facing an auditorium of five-hundred seats. Realistically, combining that sort of scale with this sort of time frame is never going to be the easiest of tasks. Was it pulled off? Alas, much was left lacking in a production that remained frayed around the edges. 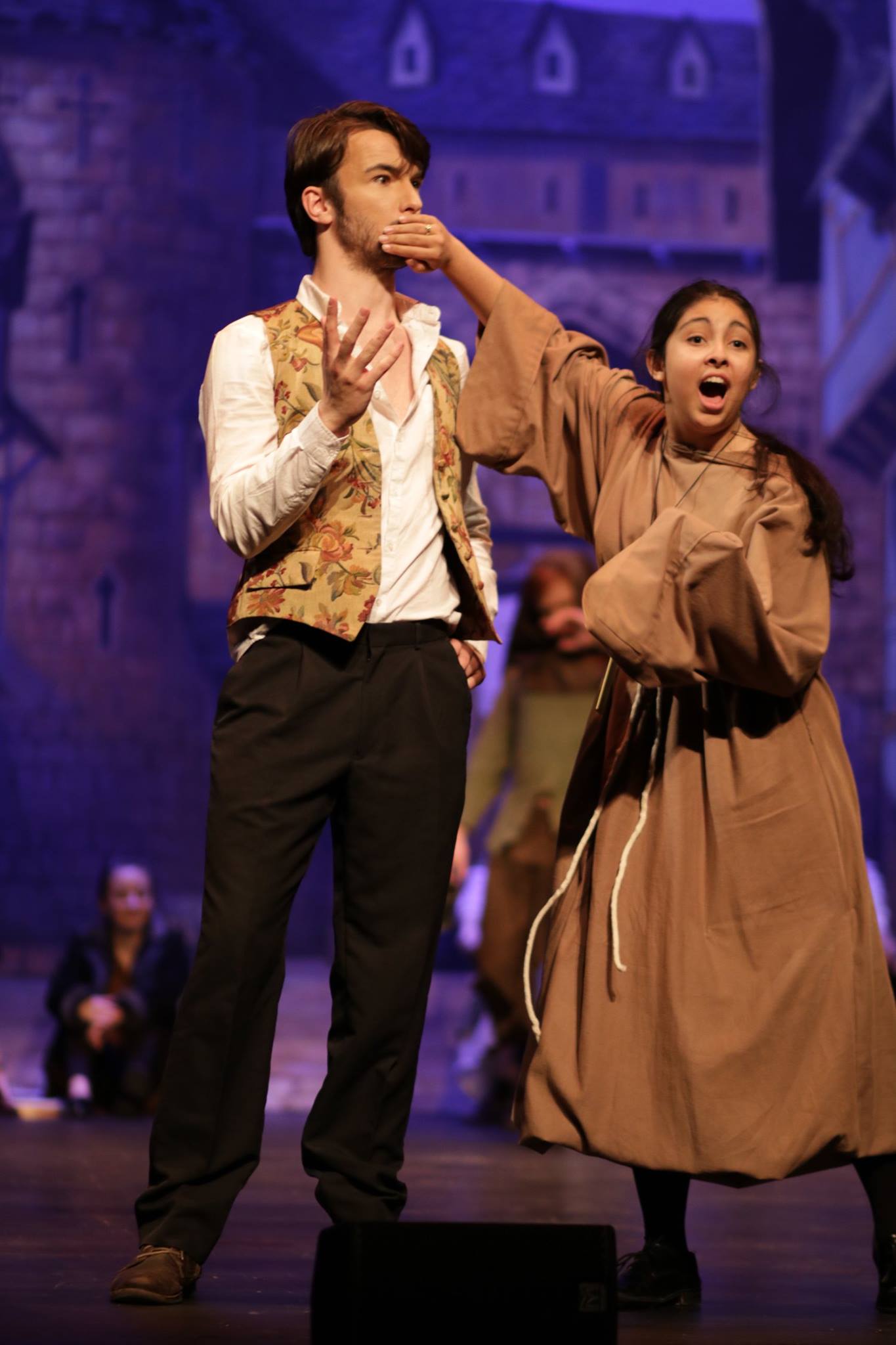 Built upon a tale-telling contest, The Canterbury Tales is an odd amalgamation of various stories that, according to the ever-reliable source of Wikipedia, is supposed to paint an ironic and critical portrait of society at the time. Director Talor Hanson may have sought to bring out the individuality of each story yet this too often slipped into splitting the stories up without allowing the message of the different proclaimed ‘truths’ to shine through. Both Zac Tiplady as the overarching Chaucer and the pilgrims’ host Bróccán Tyzack-Carlin did well to link the tales with some sort of driving narrative, yet the production lacked a slickness that could have connected the individual stories in a more cohesive way. And all too frequently I was distracted by the concerned looks of the story’s narrator checking the wings for entrances, though perhaps this was just first night stutters. The consistent marching on and off the roomy Gala stage on the other hand made the pace of this tricky text drag far more than necessary, while the amount that poor old Ed Rees got dragged about as Arcite in ‘The Knight’s Tale’ left me wondering whether it was just in a play that he had been left for dead.

Frustratingly, it was the primary premise of the act of storytelling to the onstage audience that felt most underused. Barring a few notable exceptions such as Ben George and Matthew Elliot-Ripley, the watching pilgrims seemed peculiarly disengaged with the stories told, while the various narrators seemed to be oddly removed from the pilgrims as soon as their storytelling role began. This criticism may simply be a matter of taste on the play’s structure, but the occasional use of the pilgrims to assist the action told showed glimpses of a more dynamic and consistent piece. It felt like it could have benefitted from cutting down the cast, casting aside the division between pilgrim and tale characters and making use of the watching individuals so as to almost recreate the act of imaginative storytelling on stage. Likewise, momentary uses of shadow puppets, music and physical-theatre-style movement suggested something more interesting which, if developed along a cohesive line, may have rooted the individual styles within the piece better. As it was, the matching colour of costumes of characters and narrating pilgrim provided a neat distinction between the stories, yet it also served to fragment the piece and emphasise the disconnection between each one.

Quite easily due to the tight turnaround and sheer scale of the task at hand, costume and set were a 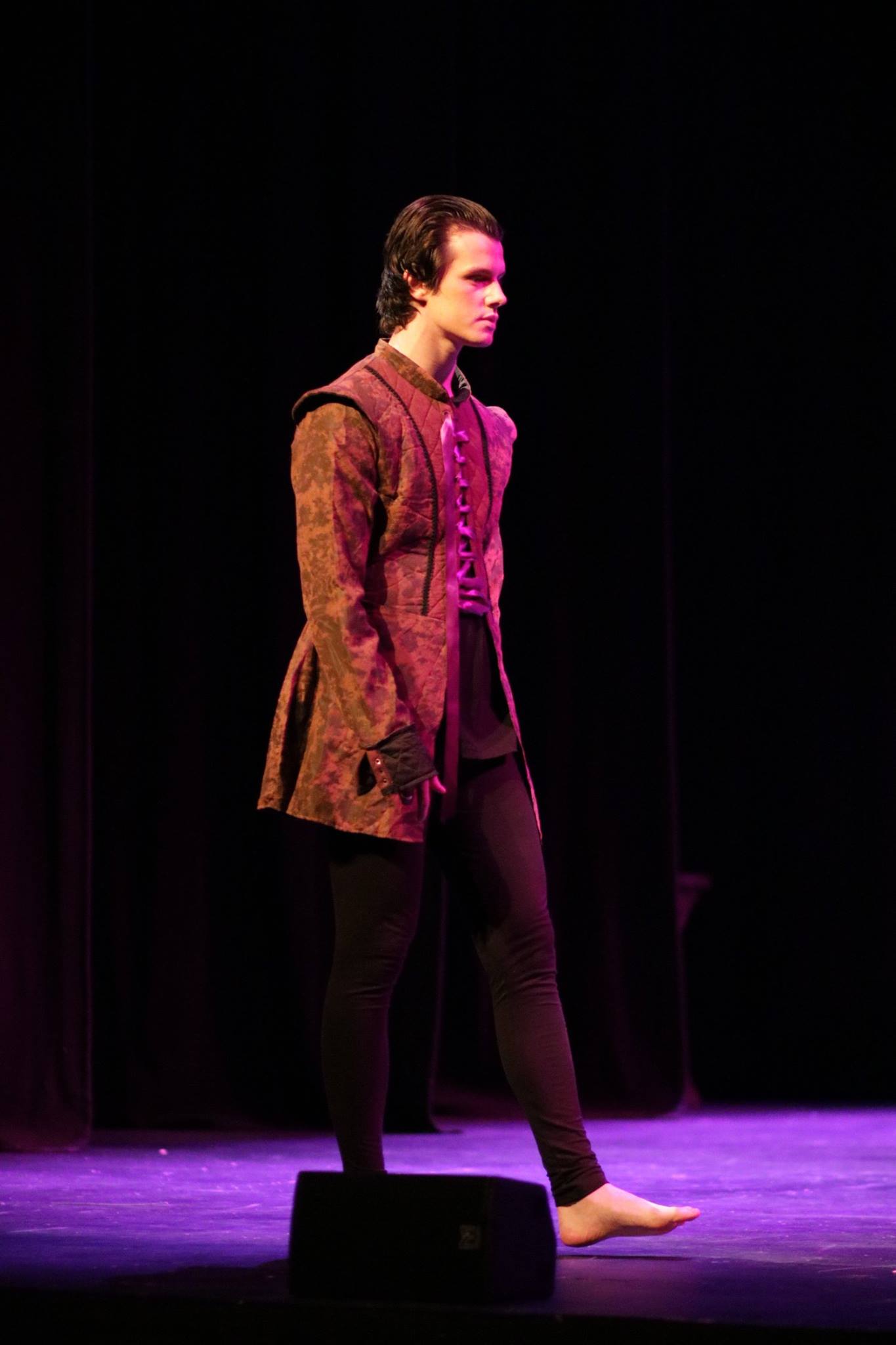 little scruffy. An odd jumble of period pieces, heeled boots, leggings and tied about material served to constitute outfits at times, while a neatening of girls’ hair (particularly when playing men) would have prevented some level of messy distraction. It should be said, however, that costumes such as the nun outfits, royal robes and chicken headgear suggested a creative flair perhaps not given the time to properly come together. The set was certainly ambitious and upon entry to the auditorium, the backdrop was very impressive. A little faith in this would not have gone amiss. Instead of lugging in various pieces of very large wooden set (we are talking whole houses here) to illustrate the various scenes, the audience probably could have been trusted to recognise the setting. It does not take a roughly hewn and stitched model of a windmill to understand that the story takes place by a windmill. A lot of hard work and effort has clearly gone into constructing it all, but it just seems a shame that it may have been misplaced.

For a text written seven-hundred years ago in verse, the cast did a fair job of dealing with the language. Diction may have slipped as lines were a little rushed in the beginning, but this tended to improve as the show went on. At times, the intentions driving the words being said were not immediately apparent, which could make the stories a little hard to follow with sudden spikes of unpremeditated emotion occasionally bursting forth. Steph Sarratt as the Merchant’s Wife did, however, engage the words with the character, thereby generating a properly rounded personality for which much of the lewdness did not feel too brash. For a play about a bunch of pilgrims, The Canterbury Tales sure is pretty crude. While there is no getting around the content, frequent looks to the audience and winks could feel unnecessary and a bit lazy. It was this sort of action that made the repeated ‘ravishings’ of women rather uncomfortable. The closest that we come to proper debate about women’s position was the threat of the Wife of Bath to sleep around for revenue should her husband not fully satisfy her desire for attire. And that’s soon shut down. The one tale narrated by the nun tells of the ‘cursed Jews’ that plan ‘homicide’; a level of anti-Semitism not sufficiently derailed by the unconvinced-sounding ‘amen’ of the pilgrims that followed or the programme’s justification that it shows how far humanity has come. Obviously, these criticisms cannot be levelled fully at the production as performed but it does beg the question of what it achieves or why it had been chosen for DST. Does it best represent what Durham students are capable of?

The answer, unfortunately, is no. But this is not an aggressive levelling of the show or the team involved. While some artistic decisions made are debatable, the time allowed and scale required of the production has inevitably constrained what might have been possible. Everyone involved has clearly given it a fair crack and, while a bit ropey, the fact that DST’s very own Gala show is up and running is a solid start for future years.