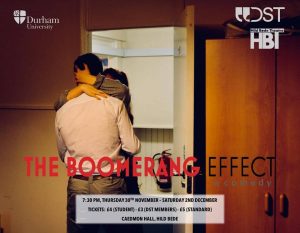 The Boomerang Effect, a vibrant comedy of interrelated storylines exploring the life of five different couples set solely in their bedrooms, was an impressive undertaking by Hild Bede Theatre, especially as their Freshers’ Play. The play combined comedic innuendos with the hilarity of everyday life, whilst also addressing more complex issues, suggesting perhaps that the bedroom should certainly be the focus of more productions! This play was well performed and proved engaging, enhanced by the fast-paced nature of the production – it was a thoroughly enjoyable watch.
This production took the complexity of comedy in its stride, assisted by the fast pace of the production. Most notably, the ordinary was made amusing, whether it be through Tom Porter’s overdramatic cynical outlook or Maxim McGrigor’s comedic comments to himself, and the cast did tremendously well in making the performance entertaining in its familiarity. It is no surprise that the audience were thoroughly engaged throughout, with laughs continually resonating around Caedmon Hall. However, the humorous nature of the play did not stop it from addressing more complex matters, from infidelity to privacy and from expectations to changing attraction. It takes considerable skill to balance humour and more serious notions, which was managed well by all cast members.
Hild Bede Theatre managed to include expressive physical performances, with movement and physicality being a key element within this production; the innuendos suggested by Charlie Gregg and Kate Middleton through the use of boots was found particularly amusing by the audience. The actors each managed to provide fluidity and conveyed a sense of informality well, which was particularly important given the setting. This further enabled the performance to seem like a true insight into the often hidden and unrecognised world of the bedroom, with Ollie Scott’s character, Paul, remarking that ‘Everything significant happens in the bedroom’. It is within this setting that the audience are exposed to the reality of relationships, from brutal arguments to declarations of love, and from life-changing revelations to the most mundane elements of daily life. The cast managed to encompass this range of emotions adeptly within their performances.
The cast should also be commended on their characterisation, as by the end of the production, the audience were left desiring even more of an insight into their lives. Immersion within the play was fairly consistent, although at times the comedic nature of the play seemed challenging for the actors, with them briefly slipping out of character, although this was quickly rectified. Moreover, the relationships between the characters were effectively revealed through language, tone and familiarity, in a way which further made the entire experience feel less performative and more realistic. Each element seemed carefully considered, and interestingly, the vocal and pacing differences between Alex Rome Griffin and Megan Dunnico highlighted their incompatible relationship, working to the advantage of the play. Although various scenes appeared somewhat over-animated, with a little refinement from the cast in the presentation of their lines, there could be great potential for this production.
One of the most impressive elements of this production was its ability to portray the ordinary, a feat much more difficult than may at first be apparent. The simplistic set was effective to this end, consisting of an improvised room using blank makeshift walls in a semi-circular shape providing an almost sit-com style appearance, as though the audience is on set witnessing the production of a TV show, an innovative design choice. Considering the entire play is set within a bedroom, the room was rather bare, yet this turned out to be a surprisingly effective choice, focusing the audience’s attention on the skilled performances of the actors. Moreover, the basic lighting choices, using a sudden blackout at the end of each scene, could perhaps have been developed further, but proved effective by not distracting from the characters and provided a slick transition between scenes. The production also made interesting use of sound; whilst the majority of the performances were silent, the relevance of modern technology within the performance was made apparent through loud text and app alerts, and the use of music during the transitions further contributed to making the production feel somewhat like a TV sit-com. These different elements worked remarkably well together to present what felt like an ordinary bedroom encounter, making the performances of the actors feel considerably more realistic.
Overall, ‘The Boomerang Effect’ is an excellent production, effectively bringing together actors with great potential and a fast-paced, engaging play, all tied together with well devised production techniques. The characters and the relatability of the relationships portrayed were the highlight of the performance. Showing on both Friday 1st and Saturday 2nd December, ‘The Boomerang Effect’ is definitely not one to miss!