Review: The Book of KEITH. 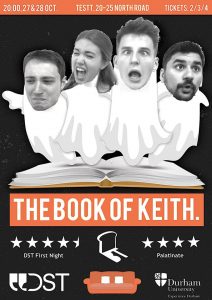 .       Last night, Buttered Toast presented their first ever full-length sketch comedy show, full of freshly written sketches, in TESTT, Empty Shop’s brand new venue on North Road, which hopefully will become more popular as the year continues. The ‘Book of KEITH.’ cast were daring and engaging, with the overall show being worth an evening out, but, I felt, fitting of its cheap ticket price, it being more of a relaxed, experimental-style show. In a small, ‘black box’ space, KEITH.’s performance was designed to be intimate. Although their sketches drew on existing stereotypes to a predictable degree, their energy blossomed as the production continued. ‘KEITH.’ included glimpses of real humour, and had the potential to be highly comedic.

Alex Taylor’s impeccable deadpan delivery was truly enjoyable and lent the show generous smatterings of conviction; at many moments, his ability to keep a straight face was inspiring, despite the chaos around him. Indeed, had his colleagues showed such resolve, this show would be greatly enhanced. The sketch format requires total energy to be channelled by the actors from start to finish, allowing the audience to be drawn in as tensions change and action is unleashed or bottled. An understandable initial lack of confidence meant that this show took time to flourish, as the actors struggled to remain fully in role or transition smoothly between scenes. That said, the technical difficulties that were apologised for at the end were unnoticeable – apart from perhaps the painful sound of a guitar cracking – so the cast therefore successfully masked these.

The sheer volume of sketches shown was impressive, with extensive props and transitions being used. Their excitement to perform was also obvious, although potentially fewer sketches, and fewer props, would have allowed smoother scene changes. A sticking point was the outfit choices, which were at times distracted from the physicality the sketches demanded, although I understand this is a troupe branded as fairly ‘relaxed’. A closer focus on quality could have removed some of the reliance on blue comedy, which edged close to offensive without the self-awareness to truly pull it off. You can reasonably expect an audience to bristle at jokes surrounding leukaemia: this detracted from the overall experience.

Each actor showcased an array of personas, with Andrew Cowburn flicking from coolly blasé to outrageously energetic (which the guitar sadly paid for) in less time than it takes for Taylor to wipe vomit off his nose. Qasim Salam’s screaming passions were intense and exciting, although they could have gained from more variation. However, he contrasted well with Taylor’s faux-innocent gentleness. The inclusion of Shakespeare was unexpected, and perhaps served to raise the standard slightly, although in practice seemed a little jarring, due to the show’s style, and felt like a confusing addition, without providing much mirth. Comedy does utilise the histrionic, but this show was in danger of ignoring normality altogether by focussing only on extremes. Lizzie Strahan fought her corner amicably, with talent for caricature, although held back at occasional key moments.

Ultimately, however, one must concede that KEITH.’s real talent was in their songs. Opening and closing in song, with various intermissions, the audience definitely was left craving another rap battle. Their use of sound effects was seamlessly fluid, which complemented their back-to-basics scenery. This is a cast with excitement and audacity that, if developed, could create refreshing hilarity. What with this performance being so early in the year, and it being KEITH.’s first performance outside of short sets in Buttered Toast’s showcases and other ‘scratch night’ style events, I think that, with slightly more preparation and selectiveness, they could create something great.