On February 27th, Feather Theatre Company opened The Best Little Wh*rehouse In Texas in the Fonteyn Ballroom in the Durham Students’ Union. The musical tells the story of an illegal but tolerated brothel in Gilbert, Texas that is threatened with closure by moral crusaders, and the complex long-standing romance between its owner, Miss Mona Stangley, and Ed Earl Dodd, the town’s sheriff. Though it was clear that a lot of heart had gone into the production, their chosen show demanded a level of melodrama and campiness that they were ultimately just not able to live up to.

However, the choice of costumes for the show was one of its stronger points, particularly for the girls in Miss Mona’s brothel. Colourful kimonos and ballgowns made for a vibrant spectacle during their ensemble numbers, keeping the audience interested and engaged. The simplicity of the rest of the costuming – flannel and jeans for streetwear, conservative dress for the church ladies, a colourful yet somewhat ostentatious suit for Sam Draisey’s Melvin P. Thorpe – was effective in creating an 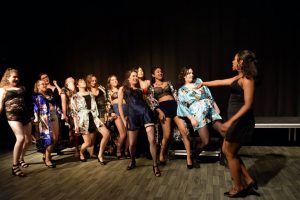 authentic ambience of 1970s Texas. Overall, the costuming stood out as a notable strength in what was an otherwise uninspired production.

The sound design of the show was a noticeable problem throughout; microphones would fluctuate between being turned on and off, and singers would often be drowned out by the loud music, making it difficult to follow numbers such as ‘A Lil’ Ole Bitty Pissant Country Place’ and ‘Texas Has a Wh*rehouse in It’ in particular. As a result, it was difficult for the show to engage the audience, and the constant changes in volume made it difficult to become fully immersed in what was happening onstage.

Though Ellie Nixon’s choreography was creative and appropriately designed for the tone of each number, it was difficult to pull off. Part of this was to do with the lack of space, especially depth on the stage, but the cast struggled to make use of what space they had; numbers often felt cramped, and too busy to act as an engaging and cohesive unit. As a result, the choreography lacked energy right in the parts where energy was most needed; numbers such as ’20 Fans,’ ‘A Lil’ Ole Bitty Pissant Country Place,’ and ‘Twenty Four Hours of Lovin’’ fell short of the vibrancy and energy that any production of The Best Little Wh*rehouse In Texas should be able to bring. Furthermore, there were points at which the choreography felt under-rehearsed; some ensemble members seemed to flounder in the more complex parts, causing the numbers to lack the seamless fluidity that was likely intended. In spite of poor execution, the choreography was the more skillful aspect of the show; its direction felt somewhat uninspired, with little effort being made to make use of the given space.

In spite of its overall weakness, many lead members of the cast gave impressive and empowering performances. Tasmin Martin-Young as Jewel surprised the audience during ‘Twenty Four Hours of Lovin’’ with her powerhouse of a voice leading 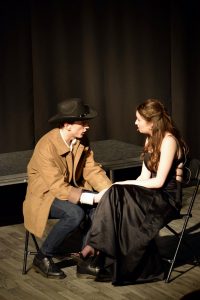 the number to great success. Of the ensemble, Charlie Penston as Dawn and Amy Nerou as Beatrice were standouts, giving constant high energy and memorable characterization from start to finish. Most notably, Grace Brimacombe-Rand as Miss Mona and Kyle Kirkpatrick as Sheriff Ed Earl gave convincing and heartfelt performances, endearing the audiences to their characters as they struggled through their complex and emotional romantic history. Grace’s voice stood out well in ‘A Lil’ Ole Bitty Pissant Country Place,’ in which she delivered energy and vivacity, but she was equally able to render the audience sympathetic to her character’s plight in her impassioned ‘No Lies.’ Similarly, Kyle was able to move between the hot-headed, unpredictable sheriff and a more soulful, affecting character in his rendition of ‘Good Old Girl.’ Overall, these two gave a strong performance that deserves credit.

The Best Little Wh*rehouse In Texas had many issues and could have done with more time to further polish the production; however, it was enjoyable all the same, with its comedy landing well and its emotional moments appropriately handled.

The Best Little Wh*rehouse in Texas will be playing in the Fonteyn Ballroom in the Durham Students’ Union at 7:00pm from Thursday 28th February to Friday 1st March.