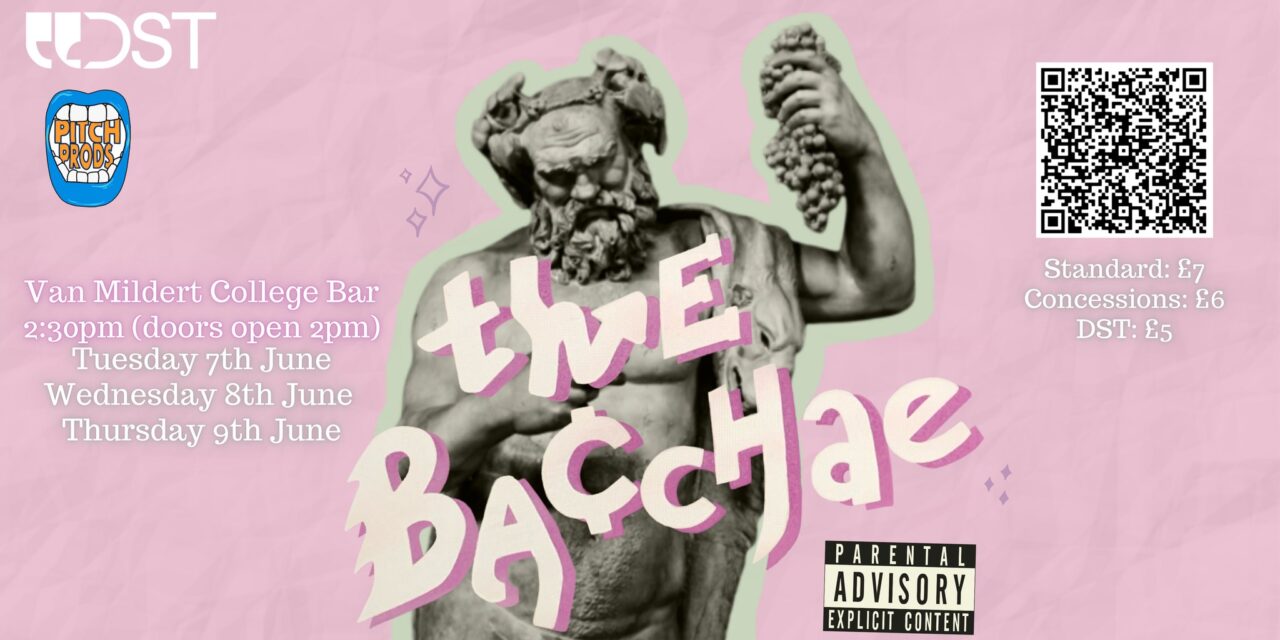 “displayed talent in every avenue of theatre”

Pitch Productions 80’s queer reimagining of the the greek classic ‘The Bacchae’ was truly a brilliant production. It displayed talent in every avenue of theatre which genuinely evoked an emotional response from its audience. Although not perfect, everyone involved in this production should be proud of their input into this magnificent production.

The very first thing to mention is the creative and intelligent basis that was provided for the show behind the scenes. The framing of the show was masterful. The use of the Van Mildert bar, combined with the bright lighting, not only heightened the 80’s club scene, but the lighting’s colouring was also reminiscent of the greek sunshine of the play’s origin. In addition, the 80’s music used within the production was well chosen. The use of these songs heightened the scenes to such an extent that I was disappointed the device wasn’t used more. All of these technical elements were clearly controlled by an astute technical director, who ran the show without a single fault. The props and costume of the show were also incredibly striking and performed their role well throughout.

In terms of the direction of the show, Adela Hernandez-Derbyshire and Charlie Cully displayed several moments of true genius, using their cast to maintain the theme of an 80’s queer environment throughout. However, in some of the more straight-laced scenes this somewhat suffered, and it would have been great to see the setting strengthened in these sections. Overall, however, the directing was pivotal in creating a simultaneously fun but emotional play.

The acting within the production was exceptional and the chemistry between many of the actors was impeccable. Ben Lewis played Dionysus incredibly, embodying the character whole heartedly. Lewis’ portrayal was fun and compelling as he was able to bring to light the 80’s setting. In addition, his pairing with Raphael Kris was a master stroke, as both actors bounced off each other wonderfully. This is similar to Immy Woodhead and Hannah Lydon ,who did incredibly well to capture a new take on the relationship between their characters in the first act of the play. The sexual tension was certainly palpable…

By the second half of the play, Immy Woodhead had displayed her great range, creating a touching scene over the death of Pentheus along with the help of Rosaleen Tite Ahern, who played her role as Agave magnificently. The hedonistic trance and slow realisation of her actions were acted seamlessly and effectively drew out an emotional response from the audience. Another stand-out character was Hidayat Malik’s messenger. Not only was he brilliantly funny in the first half of the play but he was effortlessly sombre in the second half of the play.

In conclusion, The Bacchae was a joy to watch and genuinely an impressive display of talent. The production team and the cast performed their roles perfectly, creating a great atmosphere and a compelling performance.

The Bacchae is performing at Van Mildert Bar until 9th June