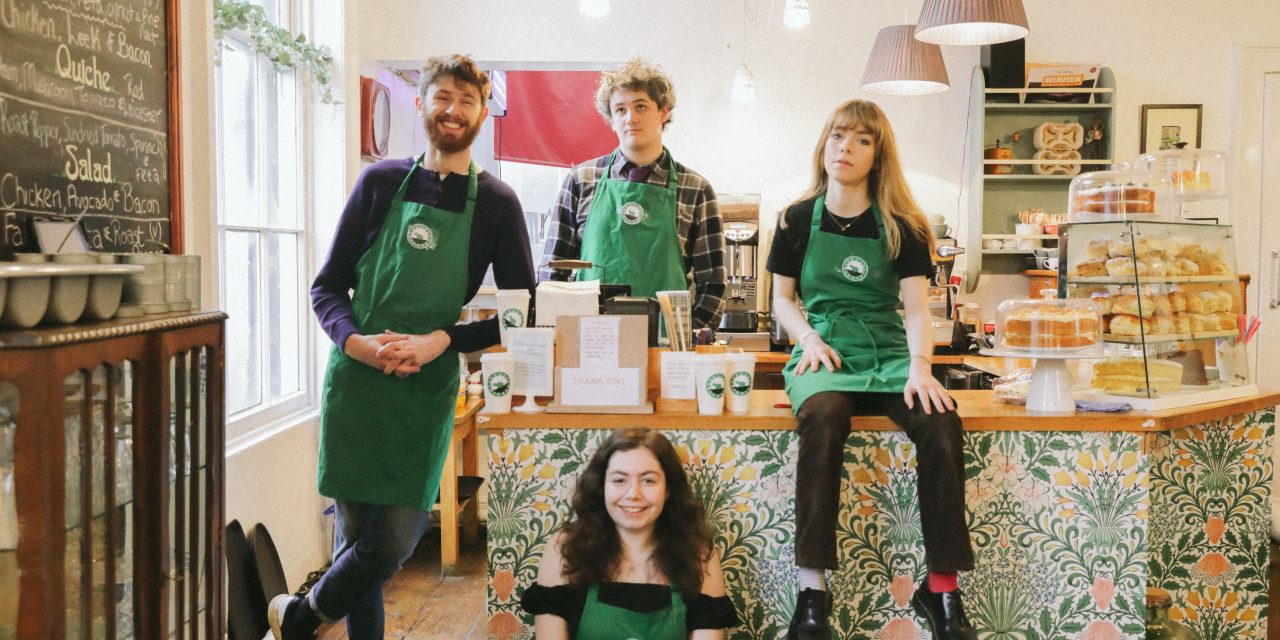 The Babbling Barista Monologues was written and directed by Natasha Ali and presented by Pitch Productions. The show centres around the chaotic and often complicated lives of four Baristas in the well-known high street chain Sunducks – yes, you know exactly what we are getting at here. Cafédral was, unsurprisingly, a brilliant choice of venue. The staging was accomplished, with Sunducks coffee cups and aprons adding subtle branding to the natural coffee shop surroundings. As one enters, the cast are already in position, going through the motions of running a coffee shop; this helps create an immersive experience.

The cast made good use of the limited space, with strong dynamics ensuring the production didn’t feel physically stilted. There is a temptation at times to take this a little far, with actors seemingly moving for the sake of something to do, which could prove rather distracting. Energy is also injected through the judicious use of physical theatre. This can often be a good tool to liven up a production in a small space, but it needs to be carefully applied. Whilst it largely worked, it seemed a little incongruous in parts; it didn’t necessarily detract from the production but also didn’t add much.

The whole thing was well-acted, but there were consistent issues with speed. The characters are meant to be highly caffeinated and very stressed, but the speed at which the dialogue was delivered rendered some of it unintelligible. This is a shame, since all the performers were adept at demonstrating their emotions through other means; such as facial expressions and body language, so there really wasn’t any need to go so fast.

Isabella Thompson stood out as Carine, whose cynicism and wit was palpable throughout her performance and provided a nice juxtaposition to the chaos of the other characters. I would also include Marvin, played by Anthony Ford, who managed to make his character instantly likable and very human. Matthew Redmond also put in a strong performance as the retentive and obsessive Marvin, and Ella Al-Khalil Coyle effectively portrayed the fractious and fumbling Ruth.

All the characters portrayed are under immense pressure to hold down their jobs and keep grinding through their often-chaotic shifts, whilst battling personal problems. Revelations about the characters’ private lives and the issues they are facing are often dropped in at random. While this created some heightened and dramatic moments, it felt a little artificial and disrupted the flow of the piece on occasion. These sudden revelations usually marked the moment that a character began to unravel, dropping their professional mask to expose the soft underbelly of their personalities. The ways in which these developments happened could have been more varied; all the characters seemed to fall apart in very similar ways. Whilst each of their personal grievances were subtly different, it risked feeling a little formulaic.

The script is also oddly didactic. It comes down hard on the greed of the ‘Sunducks’ corporation and rightly so, but it all feels a little heavy-handed. In some parts it is also contradictory, with characters getting aggrieved at customers attempting to getting to get cheaper drinks and other menu cheats. I don’t think a script that denounces corporate greed can also call out people for trying to get a freebie. These various moral messages are then spelled out to the audience at the end, as each character suggests a lesson we might take away from this play. It feels needlessly accusatory and a little twee. The script’s moral heart is fundamentally in the right place, it’s just a little clunky.

Ali successfully pastiches modern café culture, but sometimes lurches into cliché. The script relies on superficial observations for humour and this quickly becomes tiring. Long sections of dialogue about the sugary, overpriced ‘Sunducks’ menu and the chore of dealing with complex orders and irritating customers are certainly funny, but lose their impact a little as the show goes on.

Despite its flaws, the production is fun to watch and is well performed. With a little more time to iron out a few issues in the show, I would go and see it again in a heartbeat.

The Babbling Barista Monologues continues on 29th February at 7pm in Cafédral, Owengate.