As someone who has dabbled in amateur dramatics in the past, nothing quite inspires fear like the word ‘improvised’. Nightmarish visions of fumbling, awkward silences and stunted comedy come forth and the prospect of an hour long performance filled with such things naturally led to some apprehension on my part. After watching the Durham Improvised Musical group’s Halloween special, aptly and humorously entitled ‘The AdDIMs Family Musical’, I can firmly say that my concerns could not have been more misplaced.

The DIM group’s premise is formulaic and 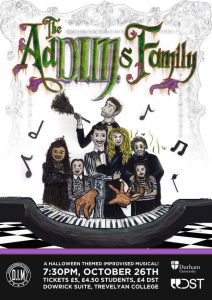 remains the same with each of their performances; nothing is pre-prepared and anything goes. The troupe’s skeletal framework and inspiration comes from the audience who are asked to provide the play’s setting, a title and a song to be featured at some point during the performance. For those with the guts to submit ideas, we had suggestions ranging from Belfast to mortuaries. Eventually, it was decided that ‘The AdDIMs Family Musical’ would become ‘The Legless Spider’ framed by the setting of an idle, unsuspecting pumpkin patch which would become the site of covens, romance, and an anthropomorphic slug from Blackpool. Beginning as an ensemble before sub-dividing into smaller groups, the performers drew together their narrative like a relay; some members of the cast would devise a section of the story before passing the metaphorical baton and letting someone else’s imagination run wild. Eventually, the musical evolved like Frankenstein’s creation; stitched together were different parts, brought miraculously to life.

Framed by Trevelyan College’s Dowrick Suite with only seven cast members (plus a pianist) to fill the stage, one would imagine that this would prove quite the challenge; however, the cast used the space effortlessly. A major advantage of this brimming stage was the heightened sense of audience involvement. This closeness generated between the actors and observers created a sense of intimacy; the performance felt a lot more informal and less like a sophisticated night at the opera and instead more akin to a ‘laugh-track’ on a sketch comedy show. This helped the audience become a part of the performance; not only did the theatregoers help with the initial creative process, we were also bewitched into becoming a part of the musical itself. A feature that I particularly enjoyed, and wish to commend the ensemble for, was how they remained onstage for the duration. Even when not performing their piece, the rest of the actors took residence at the back of the stage and quietly discussed their plans for the next few scenes. Not only did this build anticipation but it also gave the spectators an insight into the creative process. Being privy to the group’s planning and improvisation wasn’t dissimilar from watching a director bring their work to life in front of our very eyes, watching their creative juices flow.

At all times, the stage was awash with action, filled with a mirage of physical comedy and bombastic vocals. The comedic moments were sustained throughout the musical’s duration and served as one of the key attributes which made it shine. Much of the comedy was ‘meta’ and self-referential, and the cast members were not afraid to mock their comrades. This self-awareness granted another level of humour to the performance but it was not the only form of comedy employed. Dead-pan, dry and sarcastic whimsy had the audience’s sides aching and the improvised musical also offered a satirical take on the genre. Three members of the cast adopted the role of witches who morphed into the ‘stooge-like’ characters and offered many of the humorous story-beats —not least of all because they were incredibly reminiscent of the trio of Hyenas from ‘The Lion King’.

The musicality was also consistently strong with particular commendation to be paid to Rhys Rodrigues. His sense of comedy timing was impeccable and his ability to change the tone of a scene with a single note was unparalleled. He could capably slow down the action, or generate an air of romance or frivolity, depending on what he felt the performance required. This combined with the fantastic vocal range of the actors and harmonisation with their peers made for a great number of musical renditions which would not feel out of place in a polished, well-established musical. The stand-out lyrical moment presented itself during the ‘Which Witch is Which?’ song, as stipulated by the audience at the beginning of the evening, which finally made its appearance around midway into the play. The context of the lyric was a man caught in the middle of a witch love-triangle and his desperate attempt to recall which of the witches (no pun intended) he’d shared a passionate, but forgettable, night with. The end result was just as side-splitting as the song.

Durham Improvised Musical group’s work is all about the fun; it isn’t necessarily groundbreaking, but it is joyous. Thoughts of the dreary, dark and blustery Durham were long since forgotten after stepping into the theatre and instead were replaced with a beaming smile and aching sides. ‘The AdDIMs Family Musical’ led me to find the joy in improvisation and brought forth new desire to “keep carving and see what happens”. Most importantly of all, it taught me that “even slugs deserve love”.