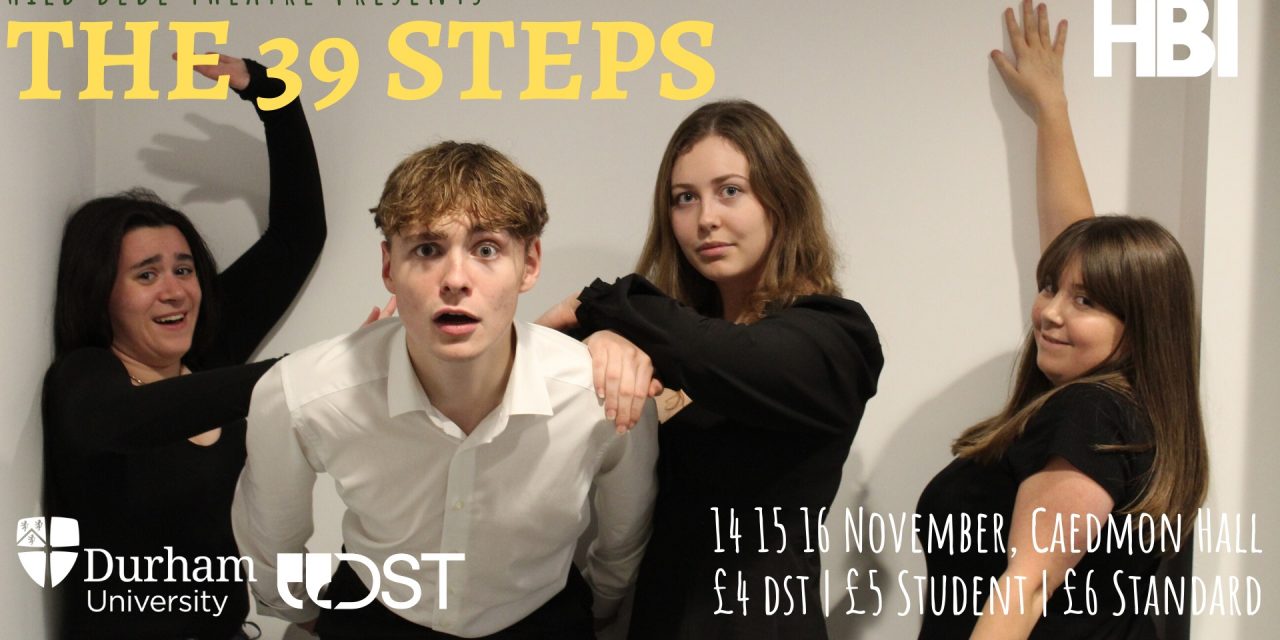 Frankie Haydon-White is entertained by Hild Bede Theatre’s performance of The 39 Steps.

Hild Bede Theatre’s production of The 39 Steps was an enjoyable evening of light-hearted comedy. Frank Dudley was fantastic as male lead Richard Hannay with great comedic instincts and timing. He was energetic and engaging all the way through and a pleasure to watch. He had great chemistry with Alesya Matyukhina, who played his multiple love interests Anabella, Margaret and Pamela, and their handcuffed scenes provided many lovely sensitive moments as well as comedic ones. Matyukhina’s subtle humour worked really well against Dudley’s more slapstick over-the top-comedy to create an enjoyable dynamic to watch.

I can’t of course forget to mention to the two other actors in the show, Dani Frankal and Alice Liddle who played the ‘clowns’, and their extremely impressive ability to snap between multiple different characters at the drop of a hat. Their use of many different accents was also an impressive feat. Their seamless transitions between characters gave the show a fast pace although the acting of the two at times did feel a little forced making the acting a little uncomfortable and too over the top at moments leaving it teetering on the edge of looking childish and amateur.

Praise must go to the tech team of Fergus McShane and Callisto Musyck for some lovely lighting choices (a particular favourite was the red in the prayer scene) and slick timing with sound effects. However, the sound was at times too loud drowning out the actors and sometimes sound effects were a little jarring for the audience.

The simple set of a table, chairs and arm chair were used cleverly to make many different sets and locations and I felt this was an effective choice although sometimes the chairs were placed in a way that meant actors were obscured form audience view. This was particularly noticeable in the hotel scene where Frank and Pamela are handcuffed together on an armchair-some lovely moments of humour and tenderness happened in this scene that were sadly obscured by the table and chairs in front of them.

I enjoyed many of the directorial decisions made by Director Hugo Millard and Assistant Director Peter Firbank. A particular favourite was the chase scene on top of the train which was executed and directed wonderfully. I also really enjoyed the use of written signs which added lovely moments of humour. However, I did feel that there were some odd choices made such as Hannay and Pamela being given a Tesco meal deal to eat for supper – I wasn’t sure if this was really funny or just strange.

There were a few first night mishaps, such as actors running across the stage as the lights were coming up for a scene and actors and stage crew alike should be aware that due to the size of the Caedmon Hall stage, audience are often able to see actors in the wings if you aren’t far enough back, which can be distracting.

Sadly, my biggest criticism of the show was that after it ended I was confused on what had happened. I’m still not really sure what happened in some of the second half as at times music obscured important lines or it felt scenes were rushed through and crucial plot points were lost. I was left having enjoyed the play but confused and thus a little disappointed that the second act had not felt as polished as the first.

However, the cast and crew should all be very proud of themselves for producing an enjoyable show with some genuinely funny moments. If you’re looking for an evening of light-hearted entertainment and some great comedic acting I would definitely recommend going to see the show.

The 39 Steps will be performed at Caedman Hall, the College of St Hild and St Bede, on 15th and 16th November at 7:30pm.