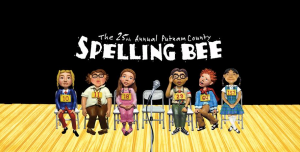 The 25th Annual Putnam County Spelling Bee is an unexpected gem of a musical which mixes humour with sincerity to produce a genuinely heartwarming and hilariously funny story. The musical comments upon the struggles and hardships of the contestants in the 25th Annual Putnam County Spelling Bee, and the characters in this show take us back to the awkward, formative years of our past, commenting on the joys and hardships of navigating the world as a young child

The production sheds light on the individual struggles of each character by delving into their innermost thoughts through song. Some of the actors doubled roles, and while the first few transitions were a little bit clunky and took some time to register, the visual cues used later on helped the transformations. It took some time for the actors to really start easing into their roles, but, from the midpoint on, I was completely sold on the illusion. The actors playing the children truly adopted the mannerisms of young children, with their perky energy and exaggerated physical movement. The musical performance that stood out the most was from Aimee Dickenson as Rona Peretti, who managed to encapsulate both a wide-eyed enthusiasm as well as a poignant sincerity in her vocals.

The comedic performances were also well maintained and worked well in sync with the live music. The live orchestra added a dimension of vivid reality to the musical, accentuating the absurd, metafictional humour of the production. Although there were some technical mishaps at the very beginning, for the most part the music blended seamlessly into the show.

The element of audience participation was one of the most memorable aspects of this musical. Four of the audience members were brought onto the stage as participants in the spelling bee, and though this set up could have easily become repetitive or felt a little tacky, these moments were impeccably incorporated into the fabric of the play. The skilful improvisation of the actors garnered some of the loudest laughs of the night, and felt in tune with the endearing humour of the musical. The inside Durham jokes were also fun tid-bits which added to the fun of the production.

Overall, The 25th Annual Putnam County Spelling Bee was an absolute joy to watch, and if you feel up to learning a couple of new words, as well as having a laugh, I would definitely recommend going to see this show.