In his director’s note for Wrong Tree’s latest theatrical venture, Cameron Ashplant claims his production is very “Black Mirror-esque” and is “incomparable to anything done in Durham theatre before.” Unfortunately, this is not the case. Whilst Black Mirror is driven by a strong and intriguing narrative, Test Bed is not, clearly prioritising creatively choreographed physical theatre before anything else. This means that story is almost nonsensical with rarely any discernible direction or even any purpose meaning that the audience were often left bewildered rather than bowled over.

The unnamed protagonist (played by a Sean Alcock) is kept in a purposefully vague “institution” that monitors his dreams, performed with delicacy and precision by the ensemble. When sent into the outside world (for seemingly no reason whatsoever other than to give him something to do), he is told not to talk to anyone because that will “ruin the experiment.” When outside, he meets a young woman who generously makes him a Pot Noodle him before he returning to the “institution”

where he consequently dreams about her. Whilst there is nothing wrong with a simplistic story, the use of extended pauses where we watch Alcock’s character perform menial tasks like brushing teeth or eating grapes feels like padding thrown in to extended the short runtime; the audience are never provided with a reason as to why they are watching him slowly eat a cold Pot Noodle or have cornflakes poured on his head.

The use of naturalistic sequences does, in theory, provide an interesting juxtaposition to the surreal physicality, but in practice feels bizarre due to stilted dialogue and unclear character motivations. The cast did an admirable job to bring their characters to life, but ultimately struggled because of the language. Why Abby Priestly’s woman on the outside world feels the need to shelter the protagonist is a mystery, as is why he falls in love with her after a few awkwardly written exchanges. The relevance of the “thought-provoking and shocking” twist ending is equally perplexing; it feels so unjustified and unexpected that not even Nostradamus could have seen it coming. It has no relevance to the rest of the plot, suggesting that it only exists for its own sake: it does not achieve its aim to “explore the less fictional realities of romance,” as stated in the director’s note.

The production does however excel in its inventive use of lighting and music. The frequent use of soft blues and futuristic 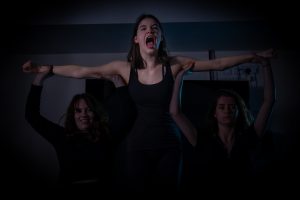 sounding music allow the audience to easily distinguish between dreams and reality in addition to giving the play the sci-fi atmosphere it tries to muster. More intense electronic beats are smoothly able to convey the protagonist’s emotion and mental state; sections where this complimented the physicality where the most effective moments of the play, it would have been good to see more of this.

Ultimately Test Bed would have fared off better as a dance show as it was not its impressive physical direction and technical elements that let the play down, but its story and writing. But then again, there is no reason why student theatre should not be experimental in form or narrative. Maybe Test Bed is itself a “test bed” of sorts for new ideas to see whether they work or not? After all, students are not professionals, we are learning new techniques and skills every day. Unfortunately, the ideas Test Bed presents do not work, but the cast and crew must nonetheless be highly commended for trying something new. Test Bed is not your standard piece of theatre, and maybe that is a good thing despite the flaws with the play itself.

Test Bed will be playing in the Vane Tempest Room in the DSU at 7:30pm on Thursday 20th and Friday 21st June.